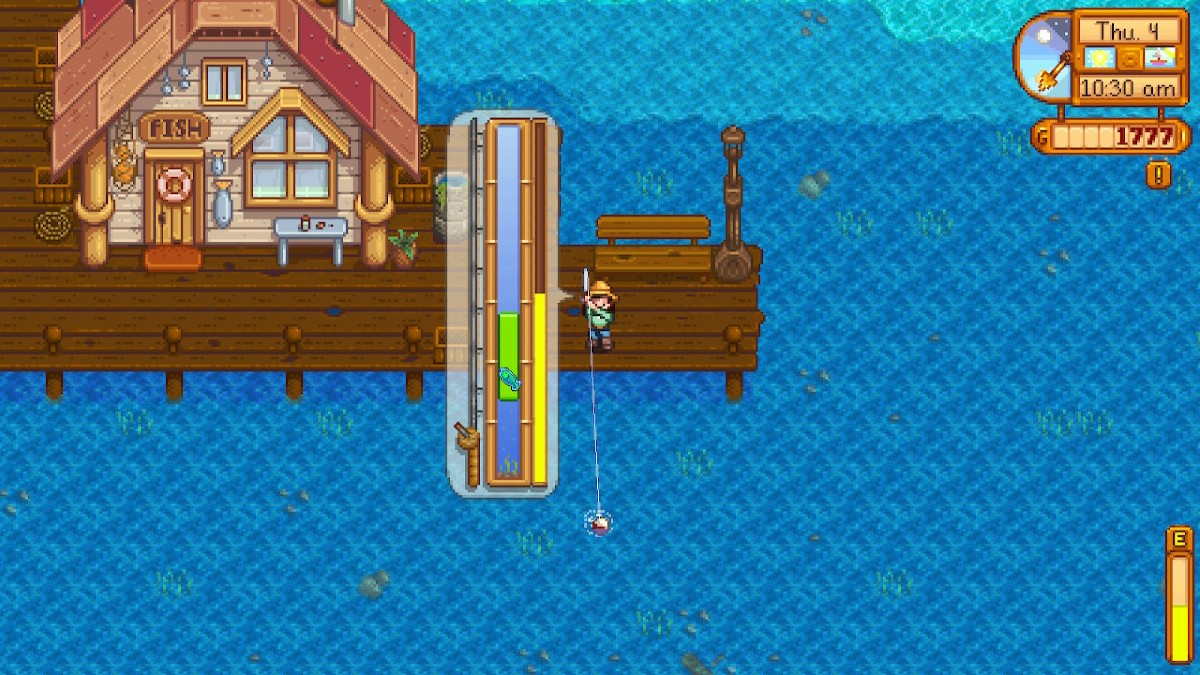 Like a river full of salmon, my love runs deep

Within my all-encompassing obsession with farming/community simulators, there is yet another obsession, like the layers to an onion: I cannot stop playing the fishing mini-games. My current Stardew Valley save is set on the fishing-friendly river farm, most of my Dreamlight Valley villagers give me a fishing bonus, and the aquarium was the first part of the museum that I completed in Animal Crossing: New Horizons by a country mile. In spite of my fascination with these mini games, I have next to no real-life interest in fish at all. Well, that’s not quite right. I like fish, in that I enjoy the ocean and aquariums and the like, but once they leave the water it’s game over.

As much as I’m an indoorsy person, I do have fond memories of fishing with my late Grandpa when I was a kid. We’d walk across the street into his neighbor’s yard and down a hill, where there was a sun-soaked pond populated with common fish species I no longer remember the names of. He would bait my hooks with the wriggling worms and grubs he pulled from his own garden (which I refused to touch), and nonchalantly threw the fish back after I reeled them in. I think he could tell that fishing wasn’t something I would have necessarily pursued on my own, but as stoic as he was, I was fairly certain he enjoyed my company, at least. Plus, I did learn to enjoy the quiet, contemplative nature of the past time.

The fun of fishing from the comfort of your couch

Looking back on those warm spring days with my Grandpa, it makes sense that those experiences translated into a love of virtual fishing. It still makes me slow down, and focus on a rhythmic, meditative activity to the point that it becomes a flow state, which is certainly one of the benefits of fishing in real life. Plus, my least favorite part — the messiness of the whole thing — is avoided entirely when I use a controller as opposed to a rod.

There are certainly other factors in play here, too. I love the water, so river banks and seaside coves are areas where I find myself posting up when given the opportunity in a game. I’m also a fan of the cute, stylized versions of different sea creatures that games will present me with (New Horizons used to be my favorite in that regard, but I think it’s been dethroned by Dreamlight Valley, especially after they put little Santa hats on them for the holiday update).

Despite all of the different ways you can make money in games like these, including the hacks that can make you a millionaire in the respective game’s currency of choice, I always find myself grinding on some fishing when I’m strapped for cash. I find a distinct satisfaction in seeing my inventory slowly fill up with various types of fish, crustaceans, and cephalopods, and then sell them off for a big lump sum. The rhythm of waiting for the fish to bite, then performing whatever button inputs are required of me, and then having an intangible and yet somehow totally tangible in-game object to show for it is rewarding to me in a way that I can’t explain — and in a way that farming, foraging, or mining can’t satisfy.

Maybe it’s the randomness of it. When you’re farming or foraging, or even mining most of the time, you know exactly what you’re gonna get when you come across an exciting item. Collecting it is still a great time, but it doesn’t have the same mystery as fishing. When you get a bite on the line, there’s a thrilling moment when you have no idea what you’re about to get — whether it will be trash or a prized pufferfish. Then when you either get or don’t get what you want, all you want to do is go back in and keep seeing what you can you’ll reel in next, over and over again until somehow you’ve spent another day on the game’s sandy shore. I can’t be the only one, right?

And now, an obligatory ranking

Now we will have an interlude in which I rank the fishing mini-games of my five most-played community sims because, well, I want to.

Of course, not all fishing mini-games are created equal when it comes to the mechanics. Animal Crossing‘s take is at the bottom of my list, because it doesn’t require any more skill than pointing your villager toward the shadow in the water at the exact right angle — a task I find tedious and strangely difficult to achieve. Next it’s Potion Permit, and while this game’s version does still require some skill, it also requires a lot of waiting once you already have the fish hooked, which I found frustrating on my playthrough.

Dreamlight Valley comes next in my ranking, because while its catching mechanic is as simple as pressing the button within a gracious time period as a ring closes around your line, I can’t deny the dopamine hit I get when I see a blue or orange circle indicating I’m about to score some primo catch.

Then there’s Hades‘ fishing mechanic, which is simple on the surface, and might feel out of place in the title’s action-packed hack-and-slash gameplay to some. What I love about this iteration, though, is that you have to press the “catch” button as quickly as you can after you get a bite without going too early — the quicker you do it, the better your loot. This actually works really well with the rest of the game, if you ask me, because I’m already all twitchy when I’m in the middle of a run. Having another activity that tests out my reaction time only adds to the wound-up fun of it all. It also gets bonus points for converting your catches into the game’s various, equally useful currencies back at the hub world.

Stardew Valley‘s fishing is the GOAT

Coming in first place is none other than Stardew Valley, and although its fishing minigame is polarizing, it is objectively the best one. When you start the game with your flimsy bamboo fishing pole, catching anything with it is a feat that will take some time to accomplish, especially for players who are new to the game. That’s because Stardew‘s fishing mechanic takes a good deal of skill and concentration, and while it turns some players off of the mechanic altogether, mastering it is only a matter of practicing.

It works like this: when you get a fish on your line, a bar will come up on your screen with a little fish icon that moves up and down at different speeds and rhythms, depending on how rare and valuable the fish is. You’re in control of a green bar, and must keep it over the fish icon by holding a button to make the bar go up, and releasing it to make it go down. The end result is a sort of dance in tapping the button to get the bar to bounce where you need it.

What I especially love about Stardew‘s fishing is the depth it has as a mechanic. Buying better fishing poles and leveling up will help you along, and you can even use different tackle like bobbers and spinners to build your pole to your preferred specifications. There’s even an extra mechanic where a treasure chest will show up during the mini-game, stationary as the fish icon moves up and down. If you can manage to hover your green bar over the treasure chest for long enough without letting the fish get away, you get some extra booty. Fun! I don’t wait to spoil anything else if you’ve yet to partake, but that’s just the tip of the iceberg.

Did this feature just turn into another excuse for me to gush about how much I love Stardew Valley? I guess so, but that game is an indisputable masterpiece of the genre, and I’m only breaking down one element here.

There are plenty of fish in the sea

Okay, I got a little lost in the tartar sauce there, but the point is that fishing mini-games are some of my absolute favorite that a title can implement. I get the feeling it’s only a matter of time before I start graduating up to the straight fishing games, of which there are many. There are also tons of other amazing mini-games out there I’ve yet to explore — for example, I hear the fishing in Final Fantasy XV kicks some serious bass.

This mechanic is a drop-in-the-bait-bucket compared to what video games have to offer on the whole, but they delight me every time I encounter a new one. Games are supposed to be fun, at the end of the day. I may not be able to explain why I’m so tickled by a virtual simulation of one of humanity’s oldest food-sourcing activities and past times, but sometimes the best things in life don’t need an explanation.