I make it no secret that farming/community simulators are one of my favorite genres, and this year has been full of sweet little games for me to cozy up on the couch with. Potion Permit is one of the titles I was looking forward to ever since I saw the first trailer, which showed off the game’s beautiful pixel art and colorful cast of characters. When it came to the gameplay itself, it looked to be pretty standard fare for the genre, with the exception of the farming side of things. In its place, the foraging and combat take center stage, as well as character-driven questlines.

Fortunately I was able to get a Switch copy of Potion Permit, because it’s one of those games that feels like it was made for a handheld console. It’s a great game to play when you have a few minutes of downtime, because it’s easy to pick it up and continue right where you left off. At the same time, it’s also one of those games that you can get sucked into for hours on end. Basically, if you love simulators, you’re gonna have a good time. The premise of the game is that the player takes on the role of a chemist, a kind of doctor who makes potions to help others with any kind of ailment they might have. When they moved to Moonbury from the big city, the player learns that the townspeople have a vendetta against chemists, as the town’s previous chemist caused an ecological disaster that destroyed some of the local flora.

It’s up to the player not only to cure the townspeople when they get sick, but also to win them over. The main gameplay consists of going out into the wilderness to gather ingredients, using those ingredients to craft potions to heal anyone who’s sick, and upgrading your tools so you can access new areas, which have new ingredients. You can also buy some ingredients, but if you like the grind, you’re gonna spend a lot of time out in the wilderness foraging.

The backdrop for all of this is the quaint town of Moonsbury itself, which of course is where you’ll meet and befriend all of the townspeople. Players endear the townspeople to them by giving them gifts that they earn by completing various tasks. Reaching a high enough friendship level opens up a unique friendship quest for that character. The quests actually have a surprising amount of depth to them, and for the most part, it feels like you’re getting to know the characters as they reveal details about their pasts, struggles, and dreams. Usually completing the quest involves making the characters custom potions, or gathering a certain number of ingredients for them.

The characters are a whole lot of fun as well, but I have to inform you that one of the NPCs you can befriend is a cat. Like fully just a cat. It’s as adorable as it sounds. You also have a sweet dog companion who follows you around everywhere, and while you have to feed the dog every day, it can lead you to any NPC on demand, which is one of the most useful features I’ve seen from a community sim I’ve seen as of late. Well done there. Obviously you can romance some of the characters, although there are only six to choose from — three men and three women. While having some weaker side characters in a game with over thirty NPCs is excusable in my book, having romanceable characters who are boring is not. There were only a couple that I actually liked, and one of them is a sexy pirate lady, so that’s a given just on premise alone.

One other note I have about the character quests: some of them are really sweet, some of them I found kind of boring to be honest, but there are a few that made me downright uncomfortable. For example, one of the characters has you make him an appetite suppressor so he can lose weight, and I’m honestly shocked to see something like that in a game that came out in 2022.

The potion-making mini-game was a highlight for me. Each individual potion has a unique pattern that you have to fill in completely in order to make it. All of the ingredients are also uniquely shaped, kind of like Tetris pieces, so filling in the required shape with as few pieces as possible becomes a fun challenge.

I was afraid that I was constantly going to be running out of pieces I needed, but I found the game was well-balanced in the sense that I almost always had the ingredients I needed to make it work, but it was never so easy that I lost interest in doing it. You can also sell extra potions for some extra cash, which came in handy for me quite a bit.

There’s a fishing mini-game, of course, because it wouldn’t be a community sim without one. I’m personally a big fan of Stardew Valley’s fishing mini-game, because it requires precision (and a lot of it, in some cases). In Potion Permit, you cast out, a fish hooks on, and then it’s a cycle of the fish getting “angry” and pulling on the line, and then briefly tiring itself out. If you pull too hard when it’s “angry,” the fish gets away, so you can only pull in short bursts when it’s tired. I think in theory, this idea works fine, it just didn’t shake out in the execution for me. I would be making good progress, but when the fish got angry, it pulled my line all the way back out almost to where I started. This makes catching a single fish take forever, and if you get impatient and accidentally pull when you’re not supposed to, you lose the fish entirely. I stayed away from the fishing unless absolutely necessary, which is a bummer because in other sims I’ll spend all day fishing because I find it so fun.

If all of that isn’t enough to keep you busy, there are also plenty of other, smaller tasks you can take on around town. The church, post office, and police station have mini-games you can partake in, which award you with some money but take two hours of your time. Then there are the requests, which, similar to Stardew Valley, you pick up from a board and require you to deposit foragables in exchange for cash.

You can also upgrade and decorate your house, which I didn’t really do at all because I was having so much fun following the main quest and progressing to the new areas of the wilderness. That’s also because a lot of the character quests coincide with unlocking the new areas, as well.

I usually like to take my time with games like this, but I felt that Potion Permit really incentivized me to go full steam ahead on this one. Let me put it this way – it’s fun if you like feeling busy and productive (like I do), but if you’re looking for a game that will let you slow down to a snail’s pace, it might not be your favorite. 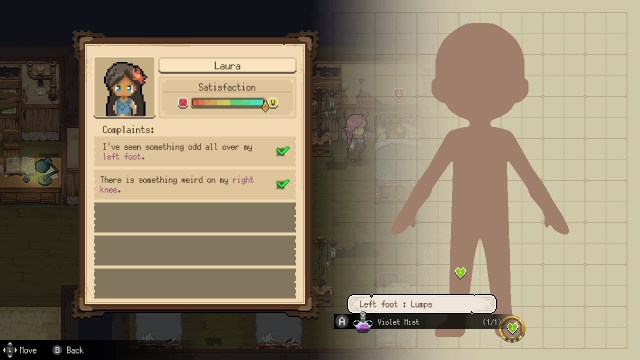 Okay, I’ve been dreading this part, but we need to talk about the bugs. Potion Permit is a very, very buggy game, and from what I can tell from looking online, the Switch version is even worse. I’m sure some of the issues have been patched by now (some of them were even patched while I was in the middle of my playthrough), but it had some pretty big issues.

Quests sometimes wouldn’t complete, or even trigger at all — I never ended up able to get the advanced fishing rod because the quest never popped for me, for example. Other times it would assign me quests I didn’t accept. Sometimes the alarm would go off that there was someone sick that needed care in my clinic, only to find it empty upon entering. I had to re-meet some of the NPCs, and lost a few days’ progress in getting to know them. For a while there was an issue where using the fast travel points entirely broke the world, so you’d be running around a glitched-out, semi-empty space. I could go on.

The worst offender of them all, though, was that every few minutes or so I would get some screen hitching on the Switch version, to the point that it would interfere with what I was doing. While many of the bugs I encountered came and went, this one was persistent throughout the entire playthrough. I think it’s fair to say that at the time I played Potion Permit, it was not really to launch, at least on the Switch. 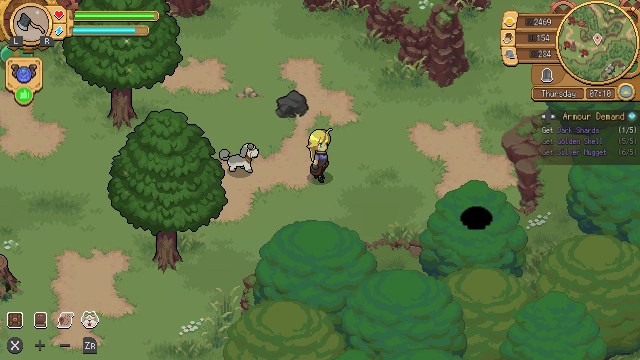 Even with all my complaints, I really enjoyed playing Potion Permit. While there isn’t much of a post-game, I think I’ll be replaying it sometime in the future. I grew pretty attached to the characters (especially the few that I wanted to romance), and the setting scratches that cozy, small-town feeling you look for in games like these.

It brought a unique spin to the community sim genre while still giving me what I love most in these kinds of games, and I’d definitely recommend it to anyone interested in playing. I’d just wait until some more bug fixes come through, first.