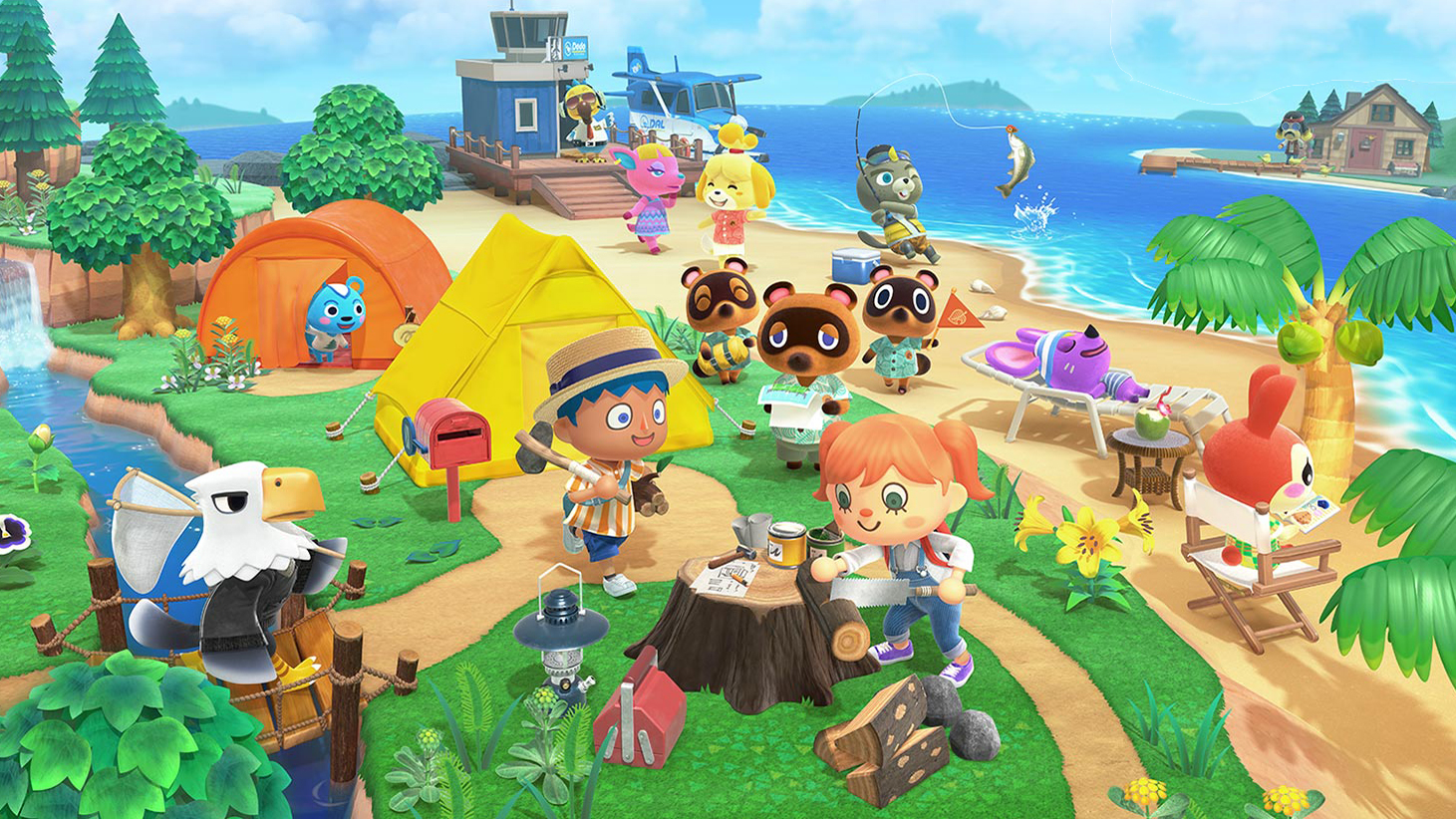 Animal Crossing is a series that has always been at odds with the type of gamer I am. I’m always looking for what’s new, wanting to beat a game and move on to the next one. That type of personality does not lend itself well to the Animal Crossing concept, one where there is no real ending and no sense of victory. It’s why every time I start up a new entry in the series — and I’ve played them all — I know there is a point a month or two down the line where I’ll just let it go, move onto sometime else and only check in on holidays.

While it’s too early to say for sure, New Horizons has the best shot at changing this habit of mine.

The first few days of Animal Crossing: New Horizons are centered around what you can’t do more than what you can. After creating a character with your preferred body type — I don’t think the word “gender” is present in this game — you’re taken to a deserted island and joined by two random animals, who will be your first neighbors. After a brief introduction by Tom Nook, you’re named “Resident Representative” and sent out to find the perfect location for your new home. This is where you’ll discover the game’s first restriction: you can’t explore your whole island right away.

Rivers are too wide to jump and there are no bridges you can cross. The vaulting pole and ladder that we’ve seen in trailers aren’t available from the start. And while you may not particularly like where you first set up shop, know that within a week or so of playing, you’ll be able to relocate to your preferred spot. But to unlock that feature, you’re going to have to work for it.

While Animal Crossing is a series that has always prided itself on its open-ended nature, New Horizons is built around continuous progression. In past games, you arrived in towns that had already been established. Here, everything is new. You’ll start with just yourself, your two neighbors, Tom, Timmy, Tommy, and the dodo brothers Orville and Wilbur. The latter two are new characters who man the island’s airport. That’s it. There’s no museum, no Nook’s Cranny, no shop for Sable and Mable. To get all that and so much more, you’ll need to complete tasks and collect items for crafting.

Crafting is the key to everything in New Horizons. You’ll craft just about everything you use, including all of your tools. These tools, it should be noted, are prone to breaking. Items with the word “flimsy” in the title are not long for this world, but as you continue building up your town, you’ll learn new recipes that’ll enable you to craft stronger versions. To make those tools, you’ll need the proper ingredients and one of my favorite aspects of New Horizons is that the crafting mechanic gives meaning to everything you can get in this game.

Shaking trees drops branches you can turn into tools, hitting rocks creates supplies you can use for metal or stoneworks. Even the empty tin cans, rubber boots, and tires you catch from the rivers and sea can find a second life here. Keep getting stung by bees? Why not collect their hives to craft a new wallpaper for yourself. That’s just one of the many recipes you can find in bottles washed up on the shore, purchase from Timmy and Tommy, receive from neighbors, or buy with Nook Miles.

Nook Miles is a new, secondary currency to bells. You earn them through completing tasks or as a reward for certain activities in the game. Nearly everything you do on your island will count toward some task in the Nook Miles program. And while it’s easy to rack up a lot of miles in the early days of the game, goalposts are continually moved each time you complete an activity. So if you complete one task that asks you to sell 50 weeds to Timmy and Tommy, the next one will ask you to sell 200 weeds. And then a thousand. To keep players earning miles more regularly, you can unlock Nook Miles+, which has a continually revolving set of tasks you can complete in a more immediate timeframe, such as catch 10 fish or take a picture.

The title of Resident Representative is more or less just the mayor from the last game. While I haven’t run into any ordinances yet — I’m barred from discussing anything that happens in this game after March 16 — determining the layout of this island is all on your shoulders. You pick where your neighbors live, where shops go, where bridges and staircases are constructed, and eventually, you’ll be able to shape the interior of the island itself. But if you want to experience this and everything else New Horizons holds, you’re going to have to be in it for the long haul. I believe this, more than any prior game in the series, is designed with the long-term player in mind. To even get to the same point where you start in Animal Crossing: New Leaf, in terms of what is available in your town, is going to take a few weeks of dedicated play. If you’re willy-nilly with how you go about this franchise, expect it to take some time to see mainstays like Blathers, Isabelle, or Celeste.

But if you are in it to win it, I think you’ll be excited about everything New Horizons has to offer. Pattern design is more relevant than ever, with customizable furniture and a detailed clothing pattern creator. Outfits at Able Sisters are available in several colors when you use the dressing room, and you should always use the dressing room. Harvey has his own island where you can create dioramas using your island residents, Animal Crossing amiibo, or Animal Crossing amiibo cards (though some characters, such as Jingle, are ineligible). You can also use amiibo to invite characters to your campsite. Again, however, some characters are ineligible. Those who want to come to live with you will be able to as long as you have a house location available for them.

Beyond that, it’s the typical Animal Crossing experience, just far prettier. While it’s not leaps and bounds above what we’ve seen before — outside of the museum which is stunning — the small touches make all the difference. Wind and breeze rustle the trees, making the world feel alive. All of the island inhabitants have a soft fuzz about them as if their old character models have been flocked. Characters are also more expressive and varied in their activities than before. I’ve come across an impromptu a cappella group, characters just racing around the town square, or sitting under a tree for a quick rest. However, I have yet to see any object interaction at the same level present in Animal Crossing: Pocket Camp.

And this island is a particularly welcoming place to express yourself. About a week ago, I waltzed into the Able Sisters shop and picked up a bright pink Desert Princess outfit that basically made me look like Princess Jasmine. At the beginning of the game, I went with the more masculine body type, but as soon as I put on that frilly outfit, all of my neighbors started complimenting my style. I know this isn’t the first game in the series to eliminate gender-specific clothing, but I don’t remember my neighbors being this supportive of my style choices in the past. It’s all very positive, and along with the poses your character strikes trying on clothes, easily the queerest the series has ever been.

I’ve enjoyed so much of my time with New Horizons that I keep forgetting Nintendo is pushing the camping portion of the game as something big. In trailers for it, you keep seeing people placing a bunch of furniture around their tent, having not yet moved onto a house. Having played the game, it almost seems disingenuous to promote a feature that makes up only a fraction of your first week with it. I was out of a tent by my second day on the island and, after about five days, there were no tents anywhere to be seen.

I wish the developers had leaned as hard into the camping motif as the advertisers have because there is this wonderful spirit of adventure that exists every time you hurdle over a river or climb up a hillside. It’s the first game in the series to have a sense of exploration outside of just visiting another player’s town and I’m genuinely giddy each time I start up and go look around my island. I liked living in a tent, even if it was small, because of how it added to the genuine feeling of being in a new world. But it can feel like you’re pushed to get out of that tent as soon as possible, because island progression is impossible without four walls and a roof.

Honestly, 18 days is far too little time to generate a comprehensive assessment of Animal Crossing: New Horizons. There is still much I don’t know about this game, including how in-game purchases will ultimately be incorporated. But based on what I have been able to experience, it’s what I’ve wanted Animal Crossing to be for many years. While it fumbles its camping-inspired opening, New Horizons makes a nice recovery with a strong focus on player accomplishment, creating a potent sense of achievement in this idyllic piece of escapism.