Cue people being mad because I think something could be better

After a Nintendo press event yesterday, I was sent home with a review unit of the New Nintendo 3DS XL. I figured it would be a good idea to record my opening of it so that I could share my trademarked cynical indignation with you all. So, sorry about that. But, you get to see what thing looks like right out of the box! Shiny toys!

It’s a pretty standard package, with the glaring exception of the lack of an AC adapter. Nintendo gave IGN the predictable company line, “Rather than raise cost of New Nintendo 3DS XL by charging consumers for a component they may already own, we are giving them the option to only buy if they need an AC adapter.”

Cool. You know, except that this device is an upgrade of an existing device, and people might want to sell the obsolete model. Not to mention, people who don’t already own a compatible power plug will be praying there will be one in stock when they go to buy the New 3DS XL, and will probably get stuck with a shitty third-party knock-off.

There are a few changes in design that immediately screamed of improvement to me. The volume slider is now located on the left side of the screen panel, hopefully eliminating the problem of accidentally nudging it to maximum and letting everybody on the bus know you’re taint-deep in Style Savvy: Trendsetters. The slot for the game cartridge has also been moved to the southern edge of the handheld portion of the system, hopefully reducing premature ejections. However, I think it sucks this new edition still lacks any sort of latch or cover to prevent the cart from being loosed by a minimal, accidental nudge.

There will be a more thorough analysis of the New Nintendo 3DS hardware coming to you by Chris Carter soon. In the meantime, enjoy looking at my hands.

[Disclosure Notice: The subject of this post was received and demonstrated at a Nintendo-hosted event in San Francisco. I feel like the event started a little earlier than it needed to, but they had Dim Sum and pizza, so that was pretty cool. Below is a picture of the Dim Sum I ate.] 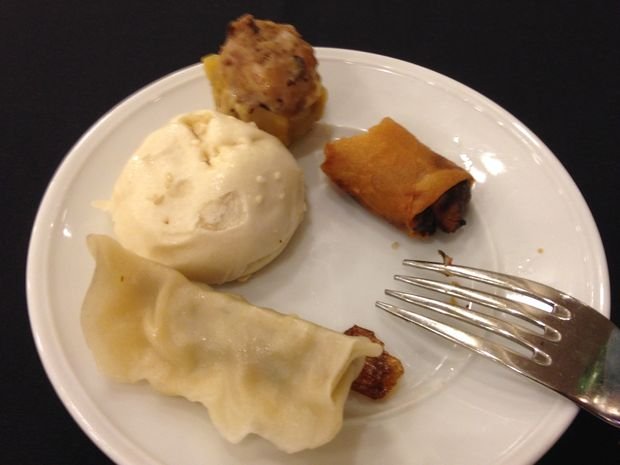