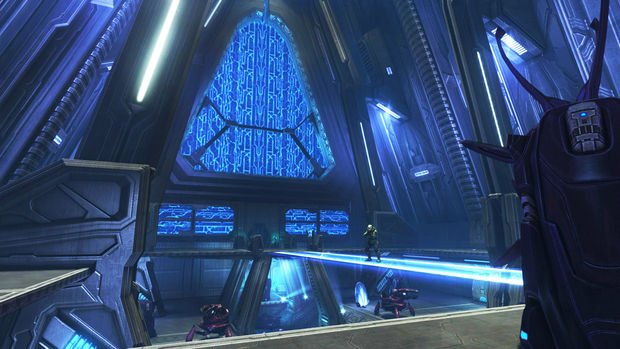 The level we ran through was 343 Guilty Spark, the mission from the original Halo which took place in a murky swamp area. Throughout the demo I kept marveling at how different the graphics used to be. The updated visuals are pretty good but you don’t realize just how good until you hop back and forth between the two engines. Pressing the Back button on the Xbox 360 controller will let you seamlessly swap between old and new graphics, with about two seconds of darkness filling the screen between transition.

As for the 3D feature, think of it as a bonus for people that already own a 3D enabled TV. Don’t have a 3D TV? No worries. 343 Industries isn’t trying to shove the feature down people’s throats. 343 custom designed the 3D stereoscopic element which is okay for the most part.

I keep saying this over and over, but 3D doesn’t work when a game has some sort of HUD to block the main visuals, especially since HUDs are never displayed in 3D either. Still, the effect was cool in some respects. Specifically the Needler gun. Seeing the pink shards fly was neat and the reload effects made the gun really pop thanks to the Needler’s kickback.

Also note that the 3D effect is only on in the new view mode. Switch to the original visual style and the 3D will be turned off. 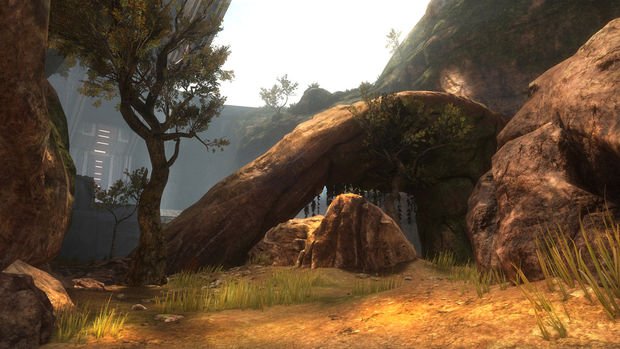 As for multiplayer, it’s based on the Halo: Reach engine but you play on updated Halo: CE maps. On top of Damnation and Beaver Creek remakes, we’ll also be getting the return of Prisoner and Timberland. The Timberland map is a big deal considering this only ever appeared on Halo: CE on the PC way back in the day.

With Firefight, only one map was shown and it’s set on a Forerunner area taken from the second level of Halo’s campaign. The big thing with this map is that AI-controlled Marines will actually be assisting you and up to three additional players, a first for Firefight.

So that’s Halo: Anniversary in a nutshell. Same game, just new coat of paint and Halo: Reach’s engine for the multiplayer. If you’re at Seattle this weekend you should swing by to HaloFest to get hands-on with the multiplayer and FireFight mode.