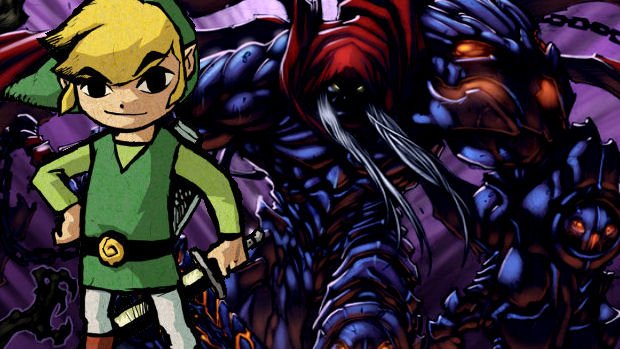 Darksiders is considered by many to be a great game, albeit one that suffers from an intense case of plagiarism. Comparisons to the The Legend of Zelda run amok, with even the game’s developer, Vigil, happily confessing to borrowing gameplay elements from the classic Nintendo franchise.

When two things are compared, one must always be declared superior to the other. While many would say that Zelda is better than Darksiders thanks to years of innovation, prestige, and inimitable charm, those people would be wrong. Considering that many people would also say Jeff Dunham is a funny human being, we can’t exactly count on what “many” would say.

Zelda may have come first, but being original rarely means being the best. No, more often it means that whoever comes next has an opportunity to take everything you did and build upon it to become better. Blatantly better, in fact. Don’t believe me? Of course you don’t, you’re a stupid idiot with idiotic retro goggles who thinks idiotic things like an idiot.

Fortunately, I’m here with the Ocarina of Truth to play you a different tune. It’s called the Tune Of Not Being Wrong About Videogames, so shut you God damned mouth and listen for once in your pathetic life!

Link is a pussy:

Let’s get one thing straight before we even begin: Darksiders is the manliest game ever made, for real manly men who are manly with their man things. The Legend of Zelda, in contrast, is for children and girls who have not yet known a lover’s touch. You only have to look at the main characters to see this is true. One is the physical embodiment of conflict incarnate, a dauntless badass who will crack the skulls of angels of demons alike. The other is Legolas. Ladies and gentlemen, War wins.

Seriously, who would you rather have on your side in battle? A man with a fiery steed and a penchant for bloodlust who can turn into a giant molten demon at will, or a pussy little elf in a green skirt? War routinely hangs off the bellies of giant Hell bats and then stabs them in the guts. What has Link ever done, comparatively? Held a little  shield in front of his girlish face so that seeds don’t hit him. Seeds! Link is afraid of SEEDS. While War is fighting the entire armies of Hell, Link’s shitting in his pants because somebody’s thrown a packet of grow-your-own at him.

It is a scientifically proven fact that if you play Darksiders, your penis will become comparable in size to a chimpanzee’s leg and gain enough ejaculative power to stop a charging African elephant. These same scientific studies concluded that if you play The Legend of Zelda, a man’s penis will split at the opening and turn back on itself so that it looks like a hideous, veiny tulip. This gruesome physical reaction is known in the scientific community as “Zelda’s Cock Flower.”

That’s how much of a pussy Link is.

The Chaoseater is better than the Master Sword:

Following on from our last point, you can tell which warrior is superior by the weapons they choose to wield. War has the Chaoseater, an ancient and otherworldly blade riddled with death masks and containing enough power to slice through a demon’s flesh and bone like it were nothing. The Master Sword? It shoots glitter at enemies. Once again, Darksiders come out on top.

The Master Sword is a perfectly acceptable weapon … if you’re a little bitch. It’s lightweight, it has a bright blue hilt for gays, and it’s been designed exclusively for a skinny little elf who needs to go and kill a gigantic wizard pig. Sure, that’s a perfectly fine weapon right there. I think I’ll stick with the giant sword of pure killing death that has been designed exclusively for bringers of the fucking Apocalypse.

Even the name for War’s sword is better. It’s called the Chaoseater. As in, the eater of Chaos. Can you eat Chaos? No, of course you can’t. War has a sword that can eat concepts! What can Link’s pissy little blade do? Oh, it can … master. Master what, exactly? It certainly can’t master chaos, let alone eat it. Darksiders wins!

Mark Hamill, ladies and gentlemen, otherwise known as the greatest actor of our generation. Hamill’s vocal performance as The Watcher is very much a highlight of the Darksiders experience, and it helped to craft one of the more memorable characters in recent gaming years. Hamill is the frigging man when it comes to voice acting, and anybody who disagrees is a sweaty pube.

By contrast, The Legend of Zelda doesn’t even have voice acting, marking it as the clearly inferior product. That’s right folks, it’s the year 2010 and Nintendo still hasn’t found the budget to hire some fucking actors. The closest we get to “acting” in a Zelda game is some little prick going “HEP HEP HARRAWP,” every single bloody time you try to attack something. It’s more annoying than listening to female tennis players, and that’s saying something.

Like everybody else in the world, I consider the Legend of Zelda Saturday morning cartoon to be the definitive Zelda. Of course, a huge part of that was the stellar voice acting. Who can forget the classic “Excuuuuuuse me, Princess,” line that Link would hilariously shout about three times per episode? The videogame Link, however, has never asked a princess to excuse him in an exaggeratedly sarcastic tone. What utter fail.

Darksiders has a shiny cover:

One of the biggest reasons why Darksiders is better than Zelda is that the Darksiders cover totally has colorful holographic awesomeness on it. Like the rare stickers in a Panini sticker album, or the coveted shiny POGs, Darksiders can provide hours of entertainment by taking the box out on a sunny day and sitting on a park bench, moving the box everso slightly up and down to make a dazzling Pink Floyd light show appear before your very eyes.

Hell, the only reason to even own a debit card is to look at the little holographic eagle. Ask nine out of ten debit card owners, and they’ll tell you! The Legend of Zelda has never had such a brilliant cover. It hasn’t even had a slightly different colored cartridge or anything, probably. Darksiders triumphs once more due to the power of holograms! It’s like that doctor in Star Trek.

Darksiders has a fantastic new gameplay element in it called The Portal Gun. During a visit to a clandestine organization called Aperture Science, War gets a magical weapon that allows him to create two holes that are linked together, allowing him to walk through one wall and come out the other. Fantastically brainteasing puzzles ensue as our intrepid hero tries to escape the clutches of GLaDOS. It truly was an innovation for its time, marking Darksiders as one of the most inventive and unique games of our time.

What, exactly, has The Legend of Zelda ever invented? As far as I can recall, swords were around long before Zelda was ever created, and that’s all those stupid games have going for them, really. Shigeru Miyamoto essentially copied everything from Lord of the Rings anyway, so it’s a bit rich for certain moronic fanboys to say Darksiders is derivative.

Yeah, when The Legend of Zelda ever does something as innovative as portals, we can resume the conversation, okay?

Darksiders will always have better graphics:

Darksiders is on the Xbox 360 and PS3, which means it will always have better graphics than The Legend of Zelda. Since graphics are the most important thing about a videogame, Darksiders is clearly the better option for any real gamer. Only hardcore gamers play the Xbox 360 and PS3, while casual gamers and women play the Wii like stupid fucking spastics.

The Wii’s graphics are so bad that anybody who has even glanced at a hi-def television in Walmart will instantly vomit blood and bits of ribcage after looking at a Wii game in motion. It is said that Billy Mays died after playing The Conduit. The game looked so dreadful that his eyes tried to eat themselves and his brain fell out through the sockets.

No Zelda game can ever look as good as Darksiders, and so Darksiders is blatantly better. If you disagree, then you are either functionally retarded or Stevie Wonder. Or both.

Christ, it’s like there is no game better at being better than Zelda than Darksiders. Even the horse in Darksiders is the cultural, physical and intellectual better of the horse in shitty Zelda. War rides Ruin, a flaming black horse capable of knocking down demonic warriors and granting War with even more physical strength just by sitting on it. Link rides Epona, a horse. That’s all it is. Just a horse. Fire-drenched monster steed versus a regular old horse. Yeah, I think I know who’s going home with the carrots.

If you like Epona in any way, shape, or form, you’re a twat. Having seen how brilliant Ruin is, you are morally obliged to now hate Epona for not being anywhere near as good. You better be hating right now.

Every Zelda is the exact same game:

Let us at least try and be honest here. If you’ve played one Zelda game, you’ve played them all. Some stupid little elf starts off doing nothing, goes to a dungeon, gets a boomerang, gets a hookshot, gets a bow, gets big boots, fights Ganondorf and then the game’s over. The pacing, the setting, the characters, practically everything in a new Zelda game is a mirror image of the last.

Fortunately for we Darksiders supporters (you can only like one game or the other btw), we do not have the same problem. Because there is only one Darksiders game, we cannot say that every Darksiders game is the exact same thing. By escaping this criticism, I have just proven that Darksiders is a better franchise than The Legend of Zelda. So stick that up your fucking arse and get the vicar to polish it!

And there we have it. I have just demonstrated exactly why Darksiders is to Zelda what coloring books are to Michael J Fox. Please, don’t thank me for setting you on the path to righteousness. Merely show your gratitude by telling fools who believe otherwise how wrong they truly are. Darksiders is blatantly better than Zelda, and that’s all you need to know.