Hour of Power number two comes to you with unfortunate tidings: you may not be aware of this, but when you were just this high, Nintendo wanted you, and bad. No, wait — not you, but mostly your parents’ bank account numbers and credit cards, rather. Like most multimillion dollar enterprises, Nintendo had positioned its key franchises to be subject to all kinds of merchandising, most of which you might remember in one form or another.

But did you know that Nintendo of America once released a catalog detailing its entire line of outsourced Nintendo merch by way of the creepiest living rooms ever photographed? They did. It’s like Robert Summa’s own personal hell made real. 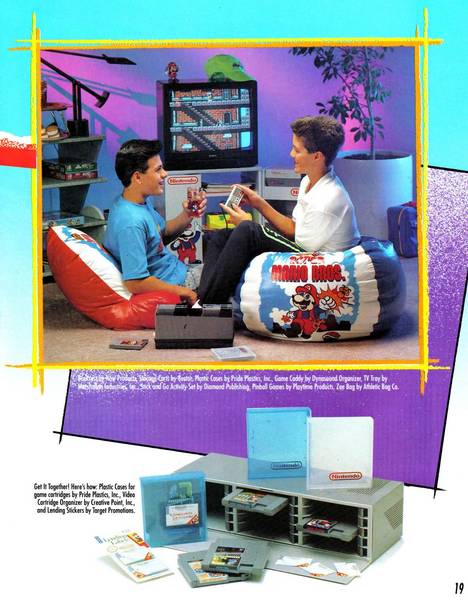 Imagine it: a world where all things are Nintendo. Your clothes are Nintendo, your sleeping bags and bedsheets are Nintendo, and your dog is surgically recontructed into some kind of hulking, freakish pseudo-Goomba.

This is the world that Nintendo envisioned, illustrated in horrifying detail within the pages of this circa-1990 catalog. Any readers who have heart conditions, weak constitutions or are otherwise easily unsettled ought to turn off their computers, hide beneath their beds, and pray for a world in which the following prophecies of a swiftly encroaching and terrible doom do not come to pass.

On the other hand, if the idea of a Nintendo-branded world makes you want to do a handstand next to your Super Mario sippy-cup, check the scans for a glimpse into the future that might’ve been.