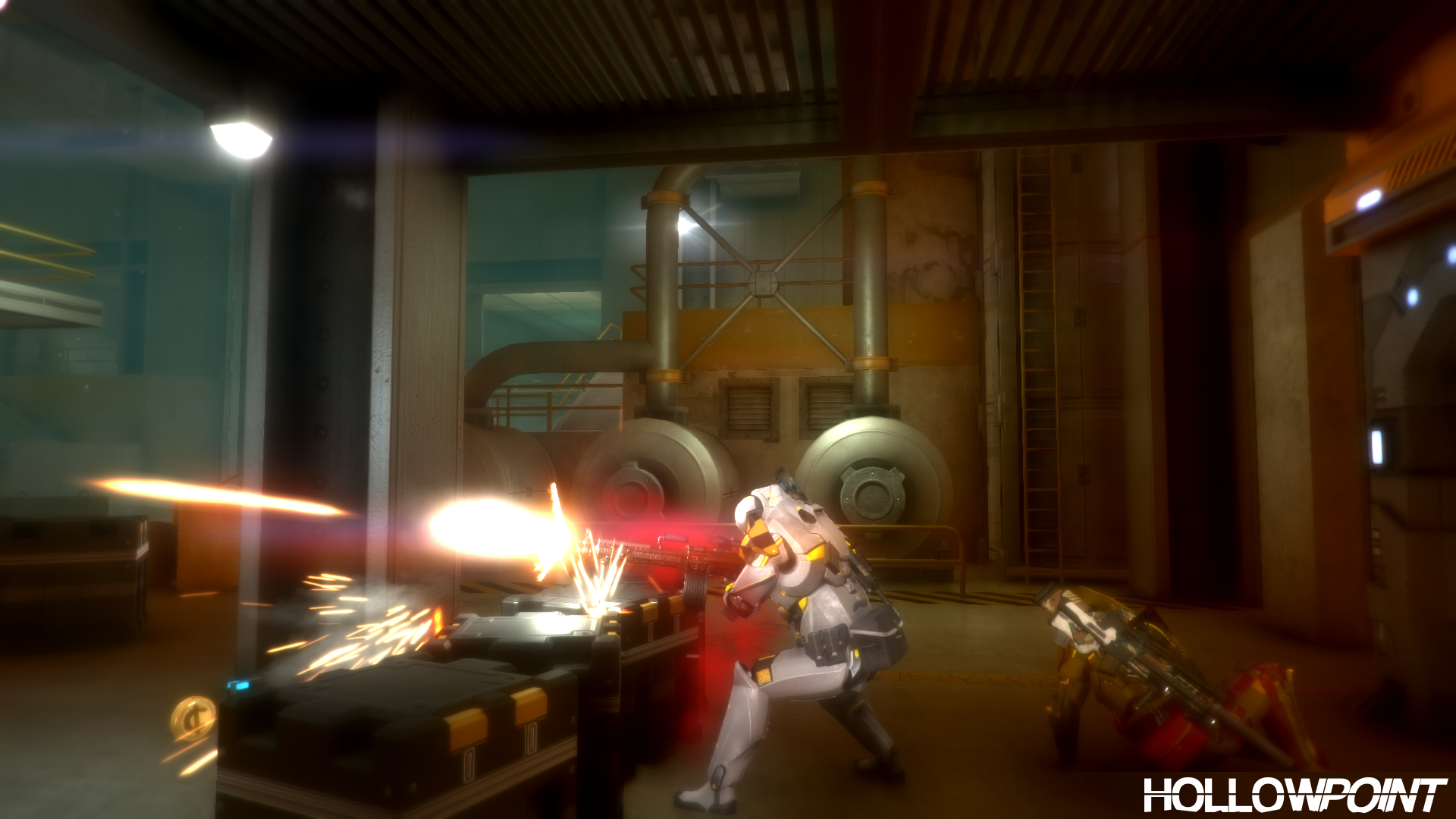 Cover shooting from all angles

Update: Cross-play for PS4 and PC will not be a feature for Hollowpoint.

It feels like you can’t go anywhere without seeing another co-op shooter set for release or being announced for the first time. Since the success of titles like Left 4 Dead and Payday, there are plenty of options to go with for some shooting action. I’m all for having fun shooting stuff with friends online, but I’ve kinda been in the mood for something a bit different. Luckily, during a trip around the show floor at E3, I came across a title that definitely takes a different approach to what we know about co-op shooters.

Crackdown 2 studio Ruffian Games is developing the 2.5D co-op shooter Hollowpoint. This new downloadable title aims to offer an interesting spin on the familiar co-op shooter formula with its focus on perspective and teamwork. After spending some time with it, I was quite impressed with the title and it might be one for fans of co-op action to keep on their radar.

Players control a group of mercenaries hired by warring corporations to undermine the opposition. Missions range from hostage rescue to search and destroy operations, all the while battling off other mercenaries and armies protecting their assets. It’s a pretty simple plot, and honestly that’s for the best. The amount of flavor text peppered throughout the mission objectives and in-game environments did enough to tell me about this world, where shadow-ops are common and result in some brutal outcomes.

What’s interesting about Hollowpoint is that it takes the standard co-op shooter setup and places it on the 2D plane. While the action-RPG system is pretty unique in its own right, it allows players to flesh out and customize the four characters, with over 90+ skills and dozens of outfits, the gameplay felt very fresh and unique from the now traditional set-up. Similar to Shadow Complex, players will travel through top-secret facilities and gulags to destroy or procure assets. As you accomplish missions, you’ll acquire skill points and cash, which can be spent on upgrading your mercs and dishing out on new weapons and armor for customization.

The enemies will attack from all fronts, both on the existing plane of movement, and in the background. Using the right mouse button, you can snap from forward plane to take aim to the background, picking off the oncoming foes. I was very impressed with how dynamic the combat felt; it felt really great having to switch between foreground and background shooting, especially when switching off between different angles of cover. You’re constantly switching between different angles, and some enemies will have a vantage point on you if they’re coming from a different area of the level.

Interestingly enough, the levels are all procedurally generated which makes each mission feel unique, even on revisits. Though I only saw a couple levels, I was impressed with design and layout, which felt like a light mix of Castlevania-esque design with the conciseness designed for a co-op shooter. It sounds strange, but it works well. Moreover, mission objectives are dynamic and alter depending on the playthrough. While some missions may seem simple on the surface, they could turn into an all-out brawl before you know it. During a hostage rescue mission, things quickly went out of control after my partner and I were discovered, which resulted in us having to set up a turret and defend the site.

I had only a brief period with Hollowpoint, but I found a lot of interesting ideas present here, and I wanted to explore more of it. Releasing on Steam and PS4 later this year, Hollowpoint should be a pretty pleasant surprise for those looking for a new shooter to get into. While I’m impressed with randomized levels, I’m concerned they might become repetitive over time. Here’s hoping the devs can keep things interesting for the long haul. With a large arsenal of weapons, wielded by a versatile and cunning group of mercs, the foes you’ll face won’t know what hit them.