Don’t you just get sick of higher difficulty levels being nothing more than a combination of giving you less HP and defense while making enemies into stronger damage sponges? Sure, its more acceptable in some cases than others, but I always love it when developers take the initiative to make higher difficulty mean something, like adding additional objective in Perfect Dark. Even nonsense like making all enemies speak only in Korean in Crysis is cute.

One of best examples of good difficulty has been the Hitman games, where playing on higher difficulties increased the challenge by improving enemy AI, giving you a limited number of saves, limiting your maps functionality, and requiring you to not leave any evidence behind. That added challenge was an extra source of replay-ability for a series of games people already loved to play over and over, but was missing from the latest installment.

Now it’s back, as IO will be delivering the Professional difficulty to all Hitman players (even those who only bought a single episode) in a free January update that will coincide with the release of the physical version of season one.

Professional difficulty will once again improve enemy AI and limit the number of saves to just one, but adds many additional gameplay changes such as the need to perform a clean kill in order to take a disguise. While most of the tweaks sound like they’ll make for interesting challenge (especially on Silent Assassin runs), there is one teeny little thing that concerns me: no running.

I understand the real world logic with regards to stealth that says running is suspicious, but this is one of those things I think might be just tedious as the core of the game already involves a lot of waiting. Thinking about taking a guys disguise by killing him cleanly and then considering what items you can safely carry in that disguise is also an idea born from real world logic, but it sounds interesting because it makes you plan. Walking just makes you slow and doesn’t seem to have a similar gameplay-benefiting aspect. Maybe I’m wrong and it’ll turn out fine, otherwise it’ll be a minor complaint at worst.

While additional difficulty levels such as “Rookie” and “Expert,” will not be returning, this is sure to give all those assassins out there even more reason to go back and play great levels like Colorado and get excited for the new season. 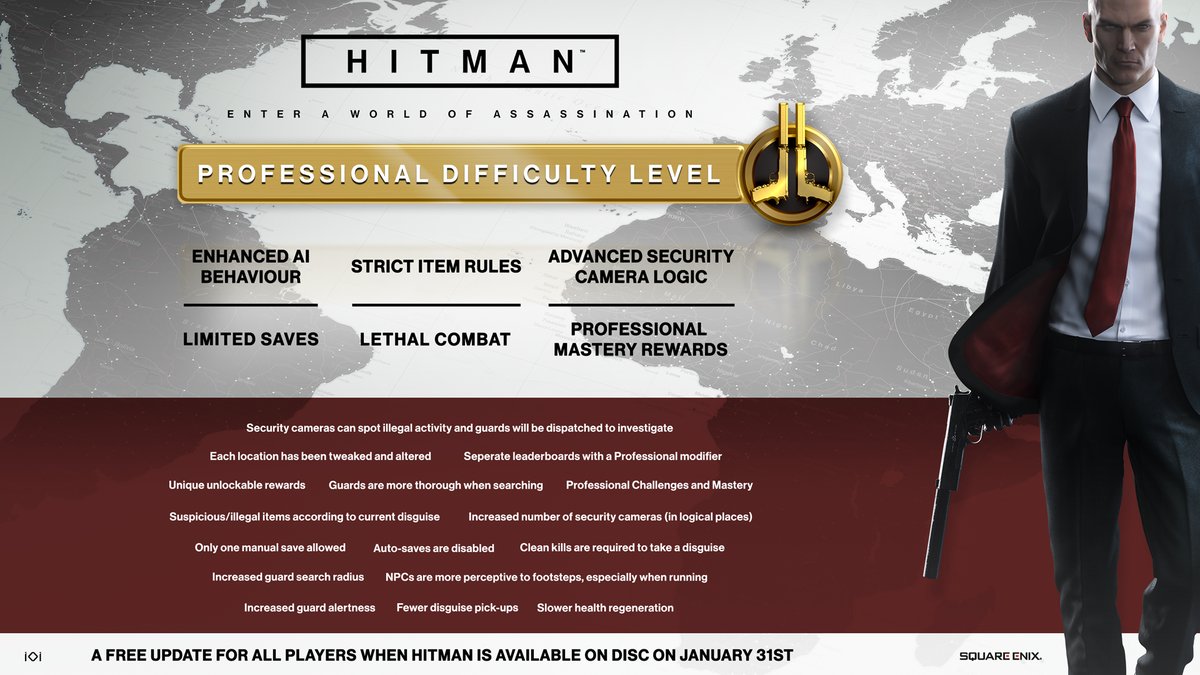