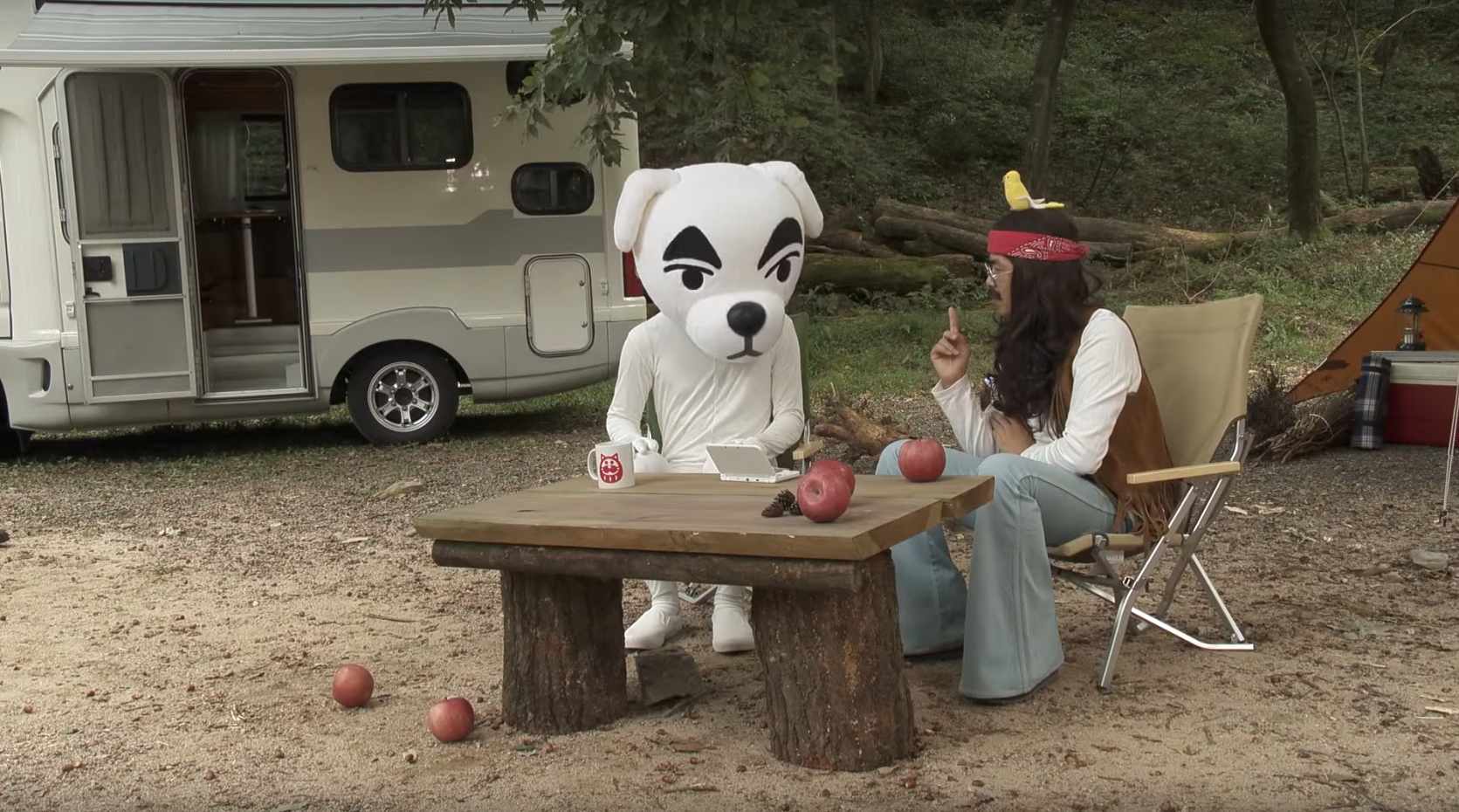 In case you missed it, the Nintendo Direct for Animal Crossing: New Leaf took place earlier this morning, and an update for the title is available now. You’ll have to download it manually, and I suspect that’s because Nintendo didn’t want to push such a huge file on anyone who didn’t want it. If you do download the update from the eShop, you may want to clear some space on your SD card first, as the file will take up over 2,000 blocks on your memory card.

When you load the updated game, you’ll notice that the title screen has been altered to read Animal Crossing New Leaf Welcome amiibo. You’ll begin by riding the introductory train with Isabelle, who lets you know about your town’s new drive-in campground. When you arrive, she’ll explain the new town initiatives, daily quests that reward the player with Mutual Exchange Of Wealth (MEOW) coupons, the only currency the new campground accepts. Upon visiting the campsite you’ll meet Harvey, a hippie-looking dog who runs the place and offers unique items in exchange for those coupons.

As you might expect from the title, the update is mostly focused on adding amiibo support to New Leaf, and both the Animal Crossing figures and cards can be used to bring villagers to your town. If you have a New 3DS, amiibo functionality is built into your system, but if not, you’ll need a separate near-field communication (NFC) device to scan in your amiibo. The genie Wisp is the key to bringing characters in, and talking to him will allow you to scan an amiibo card and invite the corresponding character to your town’s campground. The characters will show up in RVs that are just a tiny bit smaller than your town’s residences, and are decorated similarly.

You can order the furniture from these RVs by spending MEOW coupons, and the items tend to be things you can’t purchase in town. The rearmost RV is reserved for special characters like Jingle the Reindeer and Sow Joan, while the one closer to the camera is dedicated to summoned amiibo. If you want a summoned character to become a permanent resident, you can recruit them by visiting them at the campsite and convincing them to move to your town.

While the cards are an easy way to recruit characters, the Animal Crossing amiibo figures have some additional features that add more games. Scanning one of the figurines will unlock Desert Island Escape (a single-player board game) and Animal Crossing Puzzle League (basically Tetris Attack) in your copy of New Leaf. It’s not quite the same as the unlockable NES games that were featured in the GameCube’s Animal Crossing, but a nice feature nonetheless.

Select non-Animal Crossing amiibo are also supported in the update, including figures from Splatoon and The Legend of Zelda that unlock new items and characters you can collect at the campsite. Splatoon‘s Callie and Marie (my favorites) will add squirrel shaped dress-alikes named Cece and Viché, while any of the generic squid kids will net you Inkwell the octopus. Meanwhile, the Legend of Zelda amiibo will bring characters like Wolf Link, Ganon, or Epona to your town.

Some further enhancements added in the update include an AR camera feature that lets you pose and take pictures with the amiibo characters, and an available expansion to your house called a Secret Storeroom that gives you some more storage and allows you to organize furniture using the touch screen, an innovation lifted from Animal Crossing: Happy Home Designer. If you’ve played Happy Home Designer and your copy of New Leaf detects the save data, you’ll have additional items available from the Nooklings’ store. And if for some reason you decide you want to start New Leaf over, you can sell your current town to Tom Nook and begin again with a fat stack of bells in your account, sort of a New Game+ option.

While I’m not sure the update will appeal to any but the most hardcore Animal Crossing fans, it’s nice to see continued support for a four-year-old game, and in accordance with Mr. Iwata’s wishes, the update doesn’t cost a cent. Even if you don’t have any interest in amiibo, it still adds some new furniture options and daily tasks to complete, so if you’re curious, may as well give it a download.