Upcoming Homefront: The Revolution will be available in a special edition – Goliath – which ships with a radio-controlled scale replica drone with “working lights and six-wheel suspension.”

The Goliath Edition also comes with a boxed copy of the game, an “exclusive” steel book, 32-page art book, the Expansion pass and the Revolutionary Spirit pack, which includes “both the Red Skull motorbike skin and Golden pistol skin for use in the single-player campaign, and instant unlocks of the Marksman Rifle, Sniper Scope and Remote Explosives for your Resistance Mode character.”

There’s also some pre-order bonuses to sweeten the deal. The Liberty Pack features two pieces of “rare” combat gear “unlocked an ready to personalise,” Liberty Body Armour and KPA Shock Trooper Helmet. Depending on where you live in the world – and what retailer you use – you can also pick up a Guerrilla Care Package, Wing Skull Pack, and the Combat Stimulant Pack. I have no idea where or how you can get those, though – it’s undisclosed at the moment. 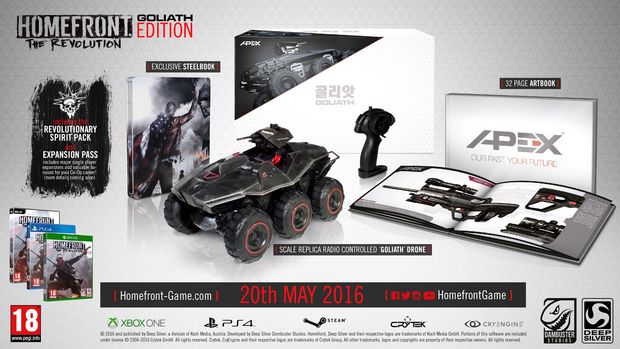 Dambuster Studios also used the press release to announce that it “commits to extensive post-launch support with all Resistance Mode content to be released free, and major single-played expansions planned.”

The price? That also seems to be a secret. I’ll keep you posted, though, my friends.

Homefront: The Revolution is out on May 17, 2016 Stateside and May 20, 2016 in all other territories on PC, PlayStation 4, and Xbox One, and a Mac version is also in development.

I played the demo and liked it, albeit in a generic I-just-like-shooting-things-anyway kind of way. I wasn’t the only one though – Chris, too, thought it was “okay”…