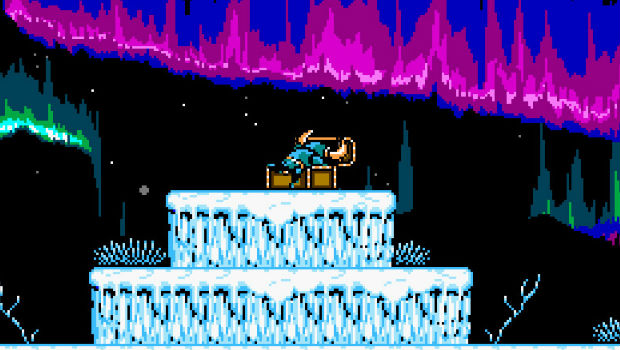 Although our review is for the Wii U version of Shovel Knight, I had a chance to test out all three versions — and since all three platforms are utterly different in nature, it can be pretty tough to decide between them. Here’s the rundown on the 3DS, PC, and Wii U versions.

On 3DS, the 3D isn’t overstated, and provides a pretty nice effect. It’s certainly not required, nor does it feel like the primary platform, but in a few levels in particular it makes the obstacles a bit more pronounced. It looks relatively the same as the other versions, and plays great either with the circle pad or the d-pad. It also has a StreetPass arena mode for asynchronous multiplayer, which is great if you have a local friend who you can enjoy the game with.

Both the Wii U and the 3DS version have support for quick item switching, by way of tapping the GamePad and the lower screen respectively. Think Mega Man X — where you can instantly switch items by tapping the icon (projectiles and defensive abilities) on the fly. You can still pause the game in any version and select them from a menu, but the tap method feels a lot more natural. The Wii U specifically supports Remote Play and a small amount of Miiverse posting. You can also use a Pro Controller, Wiimote, or Classic Controller instead of the GamePad.

I really have no complaints about the PC version, although you’re missing out on all of the other features above. The real benefit is convenience, as you can load it up on any machine that has access to Steam, as well as use any controller you want. To switch items you’ll have to pause the game and select them, but it’s not a major hassle. In general the PC edition is really responsive and runs great.

Out of all three platforms, I’d heartily recommend the Wii U. With Remote Play and Miiverse support, it edges out the other platforms a bit. Plus it only feels natural to play a Mega Man and Zelda II homage on a Nintendo console. Either way though you really can’t go wrong.

If you want to check on the status of all the Kickstarter stretch goals, read this.