On Friday, Activision revealed that you’ll be able to play most Guitar Hero World Tour downloadable content, as well as some of the on-disc songs from World Tour and Guitar Hero Smash Hits, in Guitar Hero 5 and Band Hero. That’s pretty damn awesome, even if Harmonix beat them to the punch by a year. But in case you were curious about the particulars, we’ve sorted it all out.

It’s a bit complicated, so you’ll have to hit the jump for the details. If you’ve still got a question after you go through it, you can hit up the comments.

To read more about Guitar Hero 5, wait for my preview in 40 minutes. Then check back at 4:20 PM EDT for a preview of the Wii version of the game, and tomorrow for impressions of GHStudio 2.0, the revamped song creation setup. 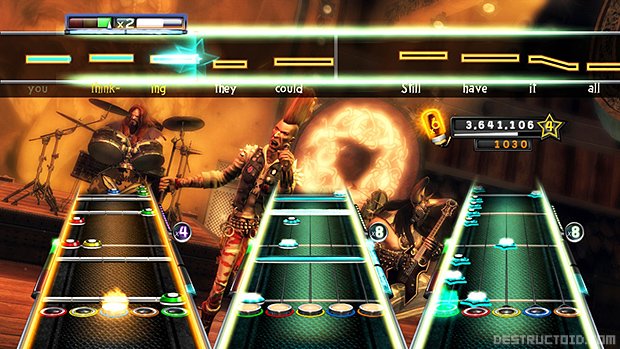 First off, you’ll have to download a Guitar Hero 5 update that will enable GH 5-specific features (such as band moments and vocal star power) for imported songs. World Tour currently has 158 DLC songs available, and as it stands, 152 of them will play nice with GH 5 and Band Hero. Importing disc-based songs will work with World Tour and Smash Hits for now, though Activision would like to add other games to that list. (The roadblock is that a song has to be re-licensed if it’s to be used in games other than the one in which it originally appeared.)

Importing songs will work in a manner similar to Rock Band. You’ll need to input the 20-digit Unique Owner ID that’s on the back of the manual of the game you’re importing songs from, and you’ll also have to pay a “nominal re-licensing fee,” though there’s no indication yet of how much that fee will be. (In other words, you won’t be able to import songs from a prior Guitar Hero game merely by renting it, you cheapskates.)

Song compatibility will work on PS3, 360, and Wii. After paying the licensing fee, PS3 and 360 users will be forced to download the full set of songs from a particular game, while Wii owners can cherry-pick the specific songs they want. (Fear not: if you decide later that you want a song you didn’t originally download, you won’t have to pay again, and PS3/360 owners can delete songs from a full game’s set.) On Wii, songs can be downloaded to system memory or an SD card; GH 5 will be the first Wii game to support high-capacity SD cards (SDHC), with up to 32 GB of storage. And if you delete a song — say, to free up some space — you can always re-download it later for free.