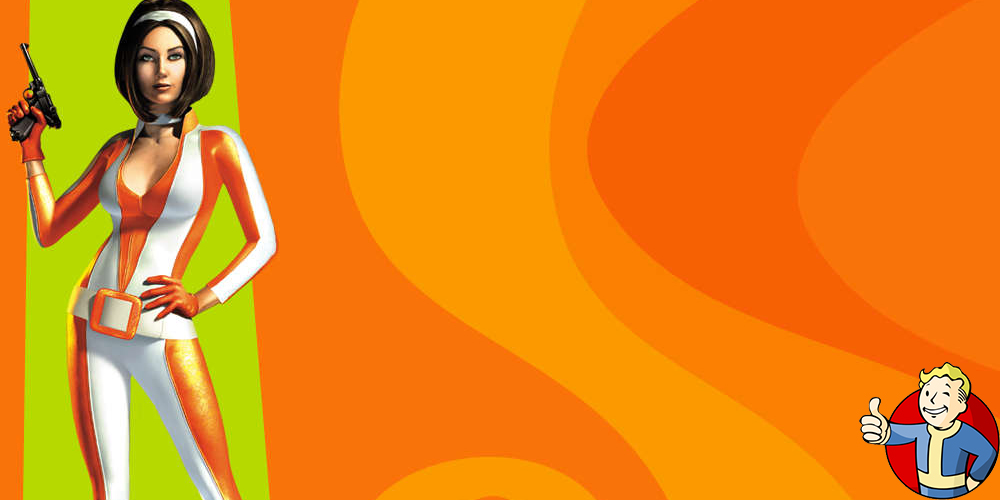 Some of the greatest action heroes are the ones that rarely use a gun. Indiana Jones uses his whip and wit to escape artifact-crazed nazis, Bruce Lee used his fists, and James Bond uses gadgets and espionage. Well, that is if you are talking about Bond films. Bond games tend to focus only on the high speed chases, explosions, and gunfights. He rarely uses his gadgets, and missions take place far away from nightclubs and exotic resorts. Bond games are cut and dried first-person shooters that happen to star 007.

And, this is why I love No One Lives Forever: It’s the best James Bond game ever made, even if it doesn’t star Bond. Cate Archer is Bond’s videogame equal. She is smart, witty, and deadly with a 9mm. Unlike the Bond games, NOLF makes the player feel like a spy, sneaking in the shadows, trading intel with codenamed agents, and using gadgets to bypass tripwires.

I want a James Bond game like NOLF, but I have my doubts that it’d be as good.

In a nutshell: No One Lives Forever is a first-person shooter that strongly leans on stealth mechanics. The story centers on Cate Archer, cat burglar turned international spy. Growing tired of her new job, she is anxious to be put on the field for a mission. When things go awry during her first outing, Cate is suddenly thrown into a mess of espionage, conspiracy, and intrigue.

“What film are you watching?” my mom asked, during NOLF’s opening cutscene. I never forgot that moment. It was the moment I felt videogames had grown up, alongside me. Returning to NOLF, 12 years later, the graphics are a bit dated but the game’s whip-smart dialog hasn’t aged a bit. The snappy, witty script of NOLF imitates the great thrillers of the ‘60s while poking fun at the psychedelic, feel-good pop culture of the time. Austin Powers may have spurred the project, but NOLF handles the satire with a lighter touch. On the other hand, the laughs aren’t quite as great.

NOLF is packed full of dialog in briefings, overheard conversations, and cinematics. Characters and relationships are made immediately familiar through the game’s lively conversations. Take for example, the opening exchange between protagonist Cate Archer and her boss Bruno. Cate’s reluctance and inflammatory wit and Bruno’s protectiveness come through along with details on his and her past. With no time at all, I cared for and felt I knew each each character. The same is true of the rest of the game’s villains and periphery characters.

Another great example is the introduction of Agent Goodman at a Hamburg nightclub. Not only does the scene establish Goodman as a lazy, arrogant partner, the dialog also boldy and directly addresses Cate’s female attributes in a way I haven’t seen a game do since. It’s a great scene that I recommend watching on YouTube, if you decide not to play.

Being a good spy is all about having control over a situation without letting anyone know it. Like James Bond, Cate Archer is frequently tasked with blending in at public spaces, using gadgets to get past security, and keeping a low profile in enemy compounds.

NOLF gets all the details right without being afraid to poke fun at genre tropes, such as agency code phrases that take the form of long, nonsensical conversations and gadgets that would fit right into a Roger Moore Bond film. Cate has a robot dog that will distract canines, an explosive makeup kit, a hairpin that doubles as a lock pick, a poisonous bottle of perfume, and many other great toys.

Sneaking into an office is something you’ve done in a game before, but NOLF’s smartly designed levels make you feel like you are on a great spy adventure. There are boss fights, outlandish setpieces, and lots of firefights, but it’s the trip to a nightclub and hunting down a fellow agent in Berlin that stick with me. Though its sequel is better in many ways, NOLF 2 didn’t quite embody the essence of being a spy in the same way — at least it tried, which is more than I can say of any recent Bond game.

A confident sense of style

Coming out soon after the first Austin Powers, it’s hard not to compare NOLF to it. It’s not a fair comparison since NOLF takes itself a bit more seriously but never too seriously. It’s plot, full of mysteries and twists, borrows a lot from the Roger Moore Bond films, such as Moonraker. While the over the top characters and scenarios broke immersion in those films, they fit perfectly in NOLF.

The villains in NOLF are so ridiculous and lovable that it’s hard to put an end to their evil plans. The main villain, Dmitrij Volkov, is a master chess player who grew up in the Gulag, Inge Wagner is a heavyset, terrible opera singer that kills with her strained vocal chords, and Magnus Armstrong is a kilt-wearing Scotsman that puts his personal honor above any orders. Each one deserves their own dedicated game.

The humor doesn’t stop at the main cutscenes, though. Each mission is filled with conversations between enemies that you can stop and overhear. The length, writing, and performances of these conversations is pretty stunning for the time. Some conversations give detail on the background of characters, while others are just random, comical tangents. NOLF is filled with so much color, literally and figuratively. It’s rare that you find a game with such a unique, fully realized world.

Some may say different, but 1998 to 2000 was the most exciting period for games. I attribute this feeling largely to the introduction of advanced scripting and cinematic storytelling introduced by Half-Life and Metal Gear Solid. Suddenly, it felt like videogames were advancing and taking the place of non-interactive entertainment. NOLF was one of the few games to follow suit, offering a lenghty story with setpieces, surprises, and memorable cinematics — three years before Call of Duty, mind you.

The first thing that comes to mind when I think about NOLF is the mission titled ‘Unexpected Turbulence’, in which the player clears out an airplane, dives out of it, and steals an enemy’s parachute before crashing to the ground. In 2000, it was mindblowing. In 2012, it’s still a pretty great scene. Escaping a meteor shower in a space station, sniping as your partner calls out targets in Morocco, and escaping a sinking submarine only to revisit it later in the game all stand out as memorable moments in NOLF.

Scripted events are a dime a dozen in games today, but rarely do they contain the flair and imagination that NOLF had before the trend even began. Now, it’s all crashing helicopters and crumbling buildings that take away player input. NOLF not only did scripted scenes a generation early, it did it better.

NOLF is a better version of Goldeneye on the Nintendo 64, minus worthwhile multiplayer. I loved Goldeneye but NOLF offers a more sophisticated take on Rare’s objective-based shooter. Most of NOLF’s missions offer freedom in approach. You’ll find multiple paths, alternate ways of completing an objective, and almost always have the ability to blow your cover, if you choose.

I enjoy a good stealth game when I’m in the mood. Though dated, NOLF’s core mechanics of hiding in the dark, sneaking silently, and distracting guards with a quarter remains satisfying, all these years later. I occasionally grow tired of these sections, so I’m glad that the game lets me go in guns blazing. Unfortunately, NOLF doesn’t compensate by adding more guards, so this approach makes for an easy, albeit enjoyable FPS. In comparison to its competition, NOLF was a very forward thinking game that knows that sometimes players don’t want to follow the suggested path laid before them.

NOLF owes a lot to Austin Powers and James Bond, but its world, characters, and story are all its own. No other FPS at the time had dynamic music, scripted events, controllable vehicles, dialogue options, and lengthy cutscenes. Time had a way of catching up to NOLF, as now these things are all commonplace. What’s not common is the game’s style and confidence. This past generation has been one of space aliens and bombed-out middle eastern villages that all blend together. NOLF is a rare example of inspired, holistic design in a FPS, where all the pieces form to create a greater whole. My mind spins in thinking what a new NOLF could be in 2012, but part of me worries that the spirit, freedom, and personality wouldn’t remain intact, in favor of current trends. Thankfully, the two NOLFs we have hold up just fine.