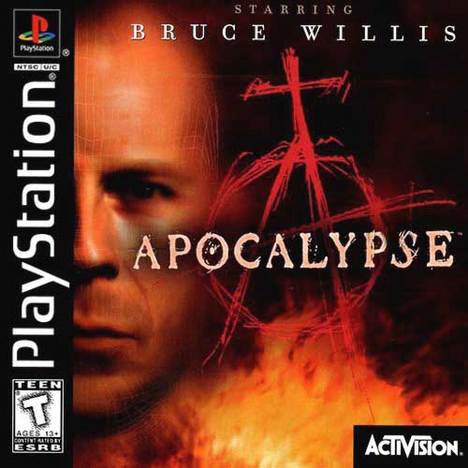 If there is a man alive more hardcore or badass than Bruce Willis, I don’t know who he is. Back in the good old mid-90’s, Bruce was everywhere. Die Hard. Twelve Monkeys. The Fifth Element. Not to mention a few years spent in Moonlighting, which was an achievement in itself – anyone who can spend more than a few months around Cybill Shepherd without punching her lights out is to be congratulated.

“But Bruce,” his legion of male, teenage fans said. “What about the video games?” In reply, Bruce made a few unintelligible grunts and furrowed his brow, and around 1998, Apocalypse was born. While momentarily appreciated during the time of its release, its old-school sensibilities relegated it to relative anonymity a few years after its release.

Until now, of course. Hit the jump to see what this wonderfully badass forgotten game is all about. 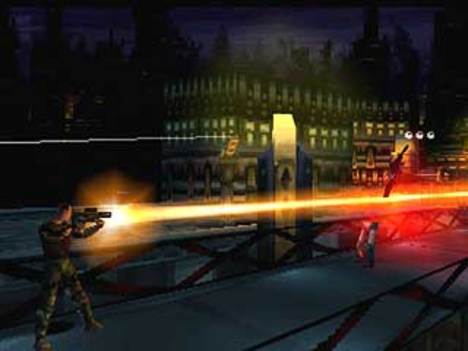 You star as Bruce Willis, who stars as a character named Trey Kincade (Best. Video game name. Ever.). Kincade has been locked up in prison for the past few years. In the outside world, a mad scientist named The Reverend (no relation) creates/summons  four demonic beings known as the Four Horsemen of the Apocalypse: War, Plague, Beast, and Death. The Reverend evidently didn’t think “famine” sounded intimidating enough. With the Four Horsemen at his side, The Reverend hopes to bring about the apocalypse.

Hearing of this, Trey Kincade decides to escape from prison and put a stop to The Reverend’s devious machinations. How does he plan on going about this? The only way Bruce Willis knows how, of course – with copious amounts of ammunition and cool catchphrases. 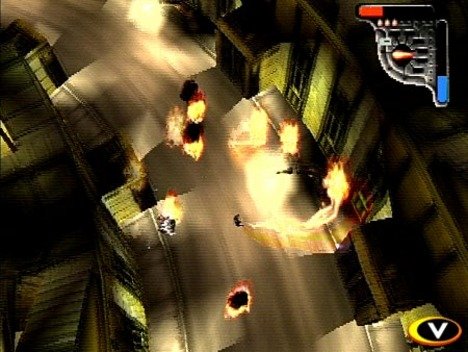 Apocalypse is basically a combination of many different old-school games, from Contra to Super Mario. The controls are identical to those of Robotron and Smash TV: the left analog stick controls movement, and the right stick gives you 360 degrees of attack. You can also use the face buttons to fire in four different directions, but why settle for only four directions when you can go fully analog? Call the control scheme antiquated if you want, but it works very, very well. It’s a shame it wasn’t repeated more frequently in the last few generations.

The protagonist, Trey Kincade, was modeled off Bruce Willis’ face back when such technology was really new and cool. Originally, the Bruce Willis character was only going to serve as a sidekick to the player: thankfully, Neversoft (yeah, the Tony Hawk guys) saw their mistake about midway through production and made Bruce the protagonist. Bruce also added his voice talents to the game, and, surprisingly, he does really well: he constantly spouts one-liners that I still remember to this day (“It’s hero time,” he playfully utters before fighting one of the Horsemen).

In terms of actual gameplay, Apocalypse focuses mostly on combat. Kincaid is frequently surrounded by baddies, and by using any one of the numerous weapons at his disposal (almost all of which are ripped off from the Contra series), he has to dispatch them. Every few levels, Kincaid fights one of the Four Horsemen, starting with Death and ending with Beast. The boss fights, like the rest of the game, are appropriately difficult but not too hard to pass once you figure out the boss’s attack patterns. The bosses and gameplay are old-school, in every sense of the word: there’s no learning curve and the enemies have a definite pattern, but the combat remains satisfyingly challenging nonetheless.

Graphically, it’s a PSOne title – what do you want? Playing the game today, it’s pretty funny that Neversoft put so much marketing weight behind the fact that Bruce Willis is scanned as the playable protagonist. Cutscenes notwithstanding, you don’t even see Kincaid’s face very much during the actual levels, and when you do, it looks scrunchy and polygonal.

Of course, nobody ever plays games like Apocalypse for the graphics. It’s about the kill-anything-that-moves, old-school gameplay, and in that respect Apocalypse definitely delivers.

Be warned, though: the ending of the game is randomly and needlessly unhappy, and will no doubt frustrate you after the game’s half-dozen levels of total badassery. 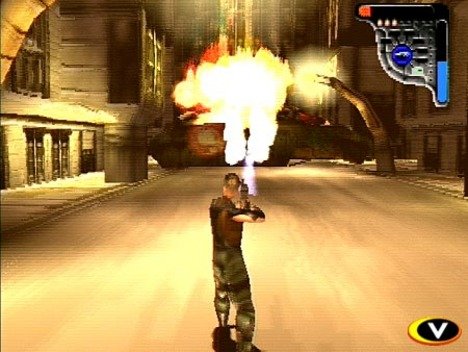 Why you probably haven’t played it

It’s a PSOne title that isn’t Final Fantasy VII or Metal Gear Solid, first of all. Your reasons for not playing it during the time of its initial release may be varied, but no one can be blamed for not playing it in today’s times: the PSOne has quickly become a game system of nostalgia, and, like the N64, only its more amazing and revolutionary games have been remembered in the collective gamer subconscious. Fun-but-flawed fare like Apocalypse tends to remain more or less unknown.

Not to mention that in the Neversoft game library, there’s very little room to think of anything other than the Tony Hawk games. Hell, Gun only came out a year ago and I’ve already forgotten it.

In the end, though, you can get it on eBay for about ten bucks. If you’re jonesing for a new 3D old-school adventure (and you really should be), Apocalypse is most definitely be worth your time.