In a little more than two weeks, Need for Speed: The Run will be released to the masses. Before it joins the avalanche of holiday titles this November, though, I had the opportunity to play the game’s single-player and multiplayer at length.

In a nutshell, it’s fun. Multiplayer is entertaining, and the less-than-anticipated story mode is starting to turn me into a bit of a believer. I’m optimistic about The Run’s release, but reservedly so. 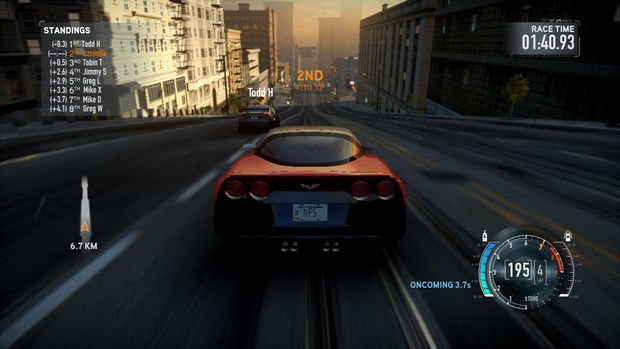 If you haven’t had a chance to catch our last preview, The Run casts players as Jack Rourke. A hothead who caught himself in some undisclosed trouble, Jack enters a high-stakes street race from San Francisco to New York in order to win the $25,000,000 prize and a chance to save his neck.

This increased emphasis on story has soured quite a bit of Need For Speed fans (myself included) — particularly the inclusion of quick-time events (QTEs). After a good three hours with the single-player campaign, I have mixed, yet optimistic feelings about the story mode. It’s a great setup for the game with a strong opening sequence and a race on the Golden Gate Bridge that I really got a kick out of.

But as the story goes on, it starts to feel paper thin in some points. Characters get introduced with only a few lines of back story during a loading screen, then after a race or two, they vanish from the plot entirely. For example, when I was leaving Las Vegas, en route to Chicago, a rival character’s back story is mentioned in the loading screen, then I’m racing against that character in the next event. Our race ends with the rival’s car spinning out of control and crashing into a fiery ball of sure-death. And that’s all you see of him.

Conversely though, the minimalist approach to storytelling does mean that you spend less time in a cutscene and more time actually racing. As a setup for the Run’s “cross-country illegal race” hook, the story works — and works great at that. As a means to actually tell a good story, I’m not sold.

At the end of my time with the single-player demo, I found myself wanting to continue playing more for the actual racing than the story. It did have its moments, and a part of me does want to finish Jack’s tale, but I’ll take it more as a breather in between racers. Oh, and as for the QTEs, they still suck. The sequences they play in are actually a lot of fun to look at. I would have much preferred to just watch them as a normal cutscene. Luckily, I only had to play two of them during my time with the game, and they were over after a minute. 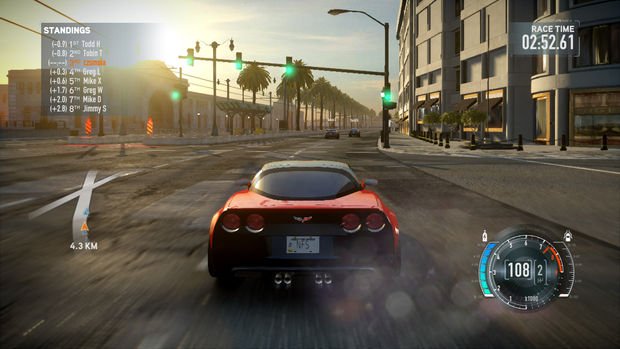 The actual races in the single-player mode include the standard placement races where you have to finish first, and a time attack mode where you have to pass checkpoints to keep your clock running. The Run also features rival races where you face off against a single opponent with much more aggressive and intelligent AI. I did start to feel as if these modes followed a bit of a formula in terms of how often and in what order you play them in, but just a soon as I started getting tired of them, the game would throw in wild cards such as cops and environmental hazards. Hopefully the game will keep throwing in enough variance to keep things interesting throughout.

Once you’ve burned through The Run’s story mode, players can hop into the new Challenge Series. Challenge Series is essentially a trial and challenge mode that takes tracks from the single-player and mixes up the races, cars, and track conditions. There is a good amount of variety here with over 70 challenges ranging in difficulty.

The first challenge I played seemed simple enough as all I had to do was finish first, but the aggressive AI made completing the challenge a task my skills clearly were not up to. Others took a few tries and some I just breezed through on my first attempt.

Like all the modes in The Run, Challenge Series incorporates Autolog, allowing players to post times against their friends. New to The Run is handy little feature that shows your friends’ best times on a certain track or challenge on your HUD. Apart from bragging rights though, beating a buddy’s time grants bonus XP and new cars, as does completing challenges.

What’s better than beating a friends best time though? How about just beating them. Multiplayer made its debut at this event, showing off just about everything. The core of The Run’s multiplayer mode is in its playlist system. Playlist are divided by the types of cars you will be using (American Muscle playlist, the Exotic imports playlist, etc.) and what tracks you will play on. So while the American Muscle playlist may feature Mustangs racing through the heartlands, the Underground playlist will have players racing in tuned import cars down city streets at night. Each playlist also comes with its own unique challenges (pass 25 racers, get 50 feet of air, drive X amount of miles with nitro) for added XP and car unlocks.

Before heading into a playlist, players can take advantage of one of Autolog’s newest — and long overdue — features. Analogous to the party systems of the Halo and Call of Duty series, Autolog now allows players to link up together online and jump in and out of playlists as a group. A curious omission from Hot Pursuit, but I’m just glad to see it finally here. 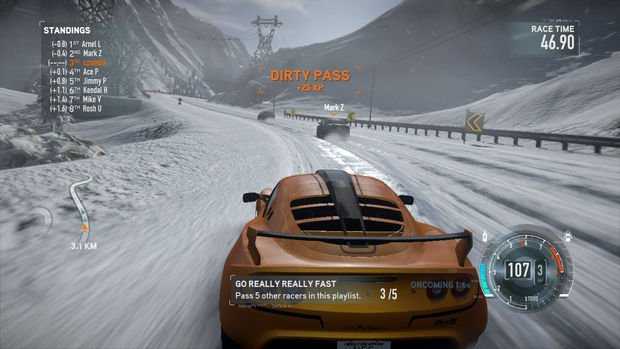 Once in an actual race, you’ll notice that The Run handles its events differently. Rather than joining a race, playing, then going back to the menu, The Run actually launches a series of three or four races before players return to the lobby. This also means that whatever car selection you make, you’re stuck with for the duration of the series. It’s a curious decision, and one that has great potential for frustration.

In my time with the multiplayer, I found myself frustrated at times because I was stuck with a bad car selection for multiple races. One welcome addition is a new jackpot system that adds randomly selected rewards, determined at the start of a series. These range from XP multipliers for the racer that does the best overall, or car unlocks for the top three players in a session.

Another new edition to multiplayer is the ability to join a match that is already in session. Basically, players that join mid-race will be placed just barely behind the racer in last place. This will certainly lead to faster matchmaking, but then again, that does mean you are at the mercy of how far behind the person in last is. There is some balancing with this in that the farther back a player is, the easier they will gain nitrous. Even so, if the rest of the pack has a commanding lead over you as soon as you join, comebacks could be come that much more daunting. Jackpots could be rendered useless as motivation to players who join a session into its second or third race.

As a huge fan of Hot Pursuit, I want to love The Run. A few reservations aside, the campaign is really growing on me, and I found myself genuinely enjoying Jack’s story at times. The Challenge Series is shaping up to be a great test of skill, and competing through Autolog in the single-player modes looks as fun as it’s ever been. That said, the changes in multiplayer have my excitement in check. The jackpot system is brilliant, but locking in a player’s car choice for an entire series could just lead to more players taking it safe with their selections, rather than experimenting and taking a loss or two. Being able to party up with friends together is a great addition. But joining a game mid-race just doesn’t make the most sense for this genre. It’ll be interesting to see how it all turns out come November 15th.

Filed under... #Electronic Arts#Need for Speed: The Run