We went hands-on with the ghostly new mode

Luigi’s Mansion launched with the GameCube to little fanfare, oft forgotten by all but its most ardent fans. When news of a 3DS Luigi’s Mansion dropped out of the blue, it reinvigorated this base, but news since has been sparse. Now I’m here to get you excited all over again.

Luigi’s Mansion: Dark Moon is alive and well. It even has a damn cool multiplayer component. It could just be the best ghost-based property since Sidney Poitier and Bill Cosby collaborated for Ghost Dad. Also, I’m sure it will be much better than Ghost Dad. That goes without saying.

We haven’t brought you a hands-on preview since we fawned over the game at E3 2011, but last week I was able to play a good heap of the game, including one of its new, previously unannounced multiplayer modes and one of the single-player boss battles. If you thought you were going to avoid its spectral hooks in light of another, increasingly characteristic heavy spring slate, I’m here to tell you: you don’t stand a ghost of a chance. 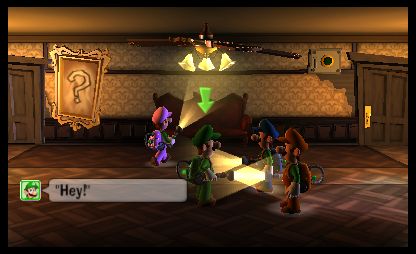 I’ll start with the multiplayer, Dark Moon’s somewhat unexpected curveball and current hotness. The multiplayer component is called Scarescraper and I was able to play one particular game mode within Scarescraper, Hunter Mode. Hunter Mode tasks 1-4 players, each a different color Luigi, with systematically moving up floors in a haunted mansion before time runs out. The mode is playable via online play, local play, and download play, which is rad. Should you choose to play alone or without the full four, no AI will join in to help out, which could make the harder difficulties quite a challenge.

The mansions that need scaling can be set to 5, 10, 25, or endless floors. That’s right, there’s a haunted skyscraper to eternity. The floors consist if various rooms strung together with ghosts hidden about. In order to advance, you have to clear all the ghosts, most of which are hiding within objects in the environment you must interact with.

Every fifth level features a boss fight. After completing levels, there is a also a red coin scramble that tasks your team with picking up four randomly scattered red coins throughout the floor before time runs out — and it runs out quickly. Do so and a power-up roulette will precede your next floor, awarding items like a doubly powerful Poltergust. If someone collects more red coins than the others, they have a greater chance of winning the power-up. Adding to the mild undertones of competitively beneath this wholly cooperative mode is a statistics screen between levels that shows information like who captured the mists ghosts, who was downed the most, and so on. 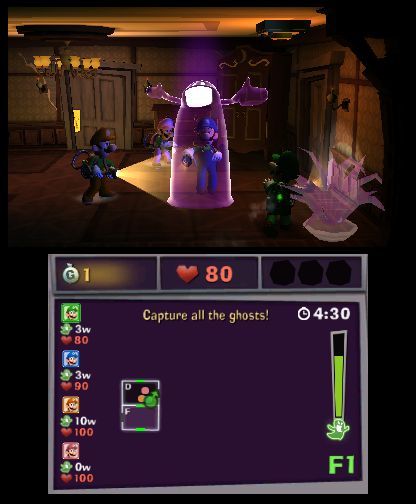 Hunter mode was a blast. It’s surprisingly complex, bringing in various bits of the core gameplay. You still have your Poltergeist for vacuuming in and blowing out, but enemies must be flashed with a strobe light to stun. Meanwhile, your dark light exposes hidden pieces of the environment in which ghosts may be taking sanctuary. Keys must be found, all the rooms will likely need to be explored, and so on. Complicating things is the impressively diverse set of enemies.

Green ghosts are the most basic, but even here there are ghosts whose sunglasses need to be removed before they can be stunned or ghosts with welders masks that occasionally lift, requiring a well-timed flash. Burly red ghosts are harder to capture, goofy purple ones flit about the room with no regard to viscosity, and so on. Beyond ghosts, rats and the like will occasionally scurry from furniture and can be flashed with the strobe for gold or health.

Teamwork is paramount in Hunter mode, and even still it can become a comedy of errors. At one point I was cursed, which mirrors your controls and makes things rather disorienting, while a teammate got a vase stuck on his head. I was trying to extricate myself from the corner to vacuum the vase from his head as he waddled about helplessly while our one unimpeded teammate tried to clear the room of ghosts. Even after the dust settled, we didn’t realize curse could spread through proximity and accidentally cursed each other again in turn right after removing it. It was like a Three Stooges episode.

Oh, and crossing the streams while reigning in ghoulies didn’t seem to have any adverse effect. 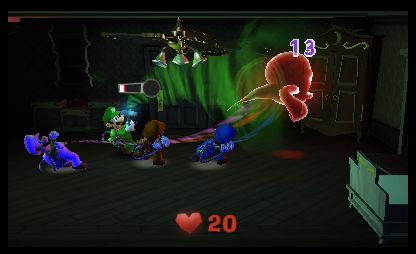 After the unexpected delight that was the multiplayer mayhem, we were dropped into the first big boss battle of the single-player campaign. Dark Moon, to refresh your memory, features five mansions to the original’s one, and each has a big, bad ghostie to deal with at its apex. After the Dark Moon shatters in the valley, the ghosts go bananas, and it’s up to cowardly Luigi to piece the Dark Moon back together to restore peace.

While flitting about with multi-colored Luigis in the multiplayer was endearing, the younger, more handsome brother’s character really shines in the single-player. Luigi’s scaredy-cat nature is a goof, but it’s adorable and endearing all the same. Whether he was shivering in his boots or doing a little celebratory post battle jig, Luigi never failed to bring a smile to my face.

As for the actual boss fight, it tests your wits as much as it tests your reflexes, asking you to employ much of your arsenal in surprisingly creative ways. I haven’t been impressed by this level of puzzle solving in a boss fight for some time. It felt simultaneously old-school and fresh; I’ll leave you the specifics of the battles so you can work it out on your own.

Just last week I was hearing people lamenting over Dark Moon’s vanishing act. I’m here to tell you it’s alive and well. Beyond well. It’s really, really cool, spooktacular even. I think fans and new players alike will find it’s been worth the wait.