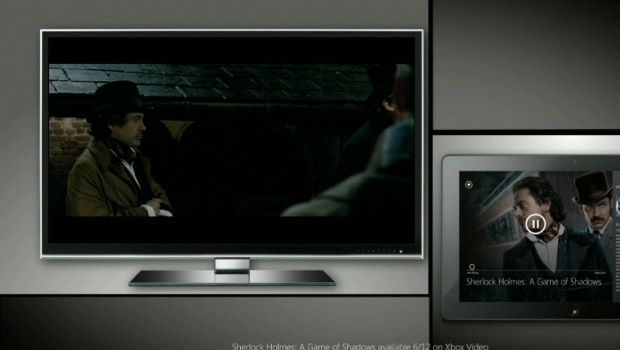 Microsoft has today announced Xbox Smart Glass, a new bit of tech that will “transform the devices you already own and love.” Smart Glass is, essentially, a feature that allows all your entertainment systems to communicate and and work together to enhance the way you watch films, listen to music, and play games.

Working with your Xbox 360, iOS, and Android devices, Smart Glass is designed to immerse the user in their entertainment. This can range from starting to watch a movie on a smartphone and then having the 360 resume it at home, to more interesting gimmicks such as watching Game of Thrones on the 360 while having your tablet sync up and portray a map of the series’ world, giving you detailed information on the show you’re watching as it happens.

In games, you could spot an interesting object while having a round of Halo, and information about that object can beam straight to your handheld device. It was also revealed that you can use a portable gadget to select plays in Madden. Naturally, this can open up some interesting new ways to enjoy a game.

Smart Glass sounds pretty interesting, and has certainly livened up an otherwise dreary conference. Very interested to see how it turns out.