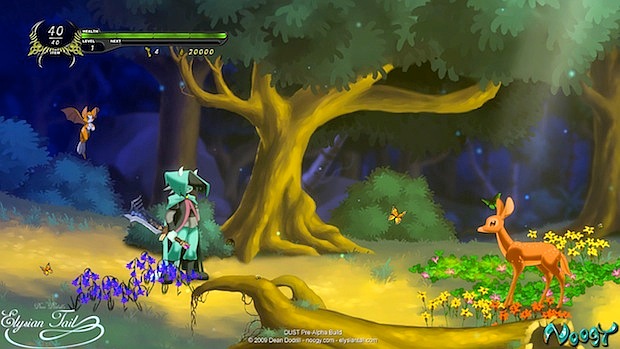 The four winners of Dream.Build.Play 2009 — an annual competition — are Dust: An Elysian Tail, HurricaneX2 Evolution, Max Blastronaut, and Rotor’scope — The Secret of the Endless Energy.

In its third year running, Microsoft’s Dream.Build.Play competition gives good Xbox LIVE Indie Games developers a crack at creating an Xbox LIVE Arcade title (or titles) and, at the very least, lines their pockets with mad cash. This year’s competition — much like 2008’s — has a prize pool of $75,000 that the winners share.

The winner of the grand prize was Dust, of course. Creator Dean Dodrill is taking home $40,000 dollars and the opportunity to have a game published on XBLA. The rest of the runners-up are as follows: Panya Inversin for Max Blastronaut ($20,000), Nivel21 for Rotor’scope ($10,000) and Hu Ling and team for HurricaneX2 Evolution ($5,000).

The creator of The Dishwasher: Dead Samurai took home the $10,000 grand prize and the opportunity to get his game on XBLA in 2007. In 2008, Team Gambit won $40,000 for Carnyvalle: Showtime like the Dodrill did this year for Dust.

Speaking of Dust, it isn’t much of a surprise that the game took the grand prize. The title’s art and animations are stunningly beautiful considering the platform. Hell, even Microsoft noted the gorgeous hand-painted art in the official release announcing the 2009 winners. Hopefully, with the money, Dodrill can make something even better (and less furry-er).