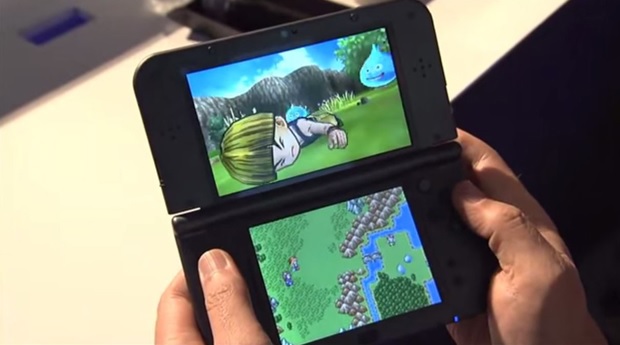 [Update: Siliconera reports that you will be able to switch between 2D and 3D diplays art any time. Thanks Omnes Morimur!]

We already knew that the 3DS version of Dragon Quest XI allows players to explore in 2D sprites and 3D polygons at the same time, but seeing it in action really drives the concept home. It looks like every dungeon, every town, and every inch of the overworld will be constructed from both flat SNES-style graphics and PS2-era “computer animation.” Even cutscenes play out in both styles, though you’ll have to look at the top screen in order to read the game’s dialogue. Sadly, it sounds like only the opening areas will deliver this dual presentation. After moving farther into the game, you’ll have to choose to go forward in either 2D or 3D.

It doesn’t look like Dragon Quest XI‘s battles will share the same dual-style presentation either, though it may be a little too early to know for sure. In this early build of the game, most overworld enemies only appear on the polygon-powered top screen, except for slimes, who appear on the bottom screen as well. As for the battles themselves, one of them is constructed from fully animated 3D models, while another is made from static 2D sprites. Chances are things will be more consistent in the final version of the game.

I’m hoping we’ll be allowed to switch between styles as we go, and are given the option to replay past areas in the alternate perspective. If Square Enix is going through the trouble to render the game in both classic and modern visuals, it may as well allow us easy access to all its work.