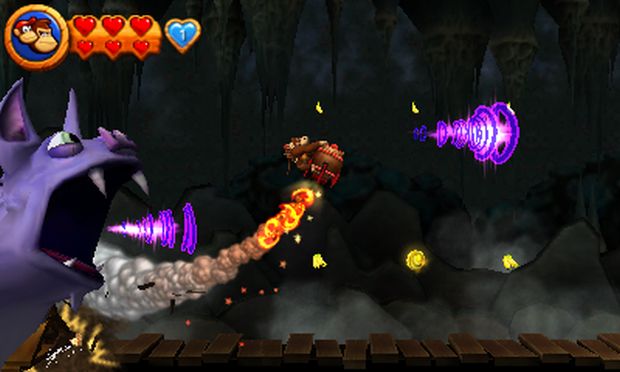 Also makes heavy use of depth of field effects

Anyone that played the Wii iteration of Donkey Kong Country Returns can attest to the often rage inducing difficulty. Low health, deviously placed traps, among other things, made for a platformer that was still fun, if not the most inclusive experience as say, Super Mario Galaxy.

While you’ll still be able to experience the original game with no changes, the most obvious alterations here with the 3DS update is the addition of an easy mode. You now have three hearts instead of two that you can take advantage of, making for a total of six when you’re running with Diddy Kong. There’s also some new items to assist, such as balloons to help you when you get stuck from a bad jump, and a portable DK barrel to summon Diddy, handy for when you’re low on health and need a makeshift pick me up.

Another addition to the 3DS version is the extra world unlocked after beating the main campaign. This ninth world brings and additional eight levels with it, and they are hard, very hard. If you still worry about this edition somehow being nerfed, these courses will put all of that to rest. Pinpoint accuracy, a healthy stock of items, and a Hail Mary are strongly advised if you want to make it through these.

In addition to the gameplay tweaks, Donkey Country Returns on 3DS makes heavy use of the 3D, particularly the depth of field effects. It’s nothing game changing, but when you shoot off in a barrel between the background and foreground with the 3D slider turned up, it adds something to the experience and sense of motion. 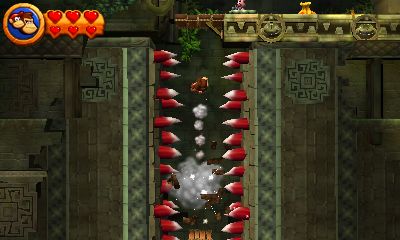 In a nutshell, Donkey Kong Country Returns 3D already looks like a better game than it’s Wii counterpart. With so much of original game’s design translating so well for a handheld title, there really was not much that needed to be done, so it’s nice to see the changes are more refinements than iterations.

If you’ve already gone through the Wii version then there’s really not much to see here, as eight more levels just isn’t worth the price of admission. For everyone else, do take note to see how this one pans out.