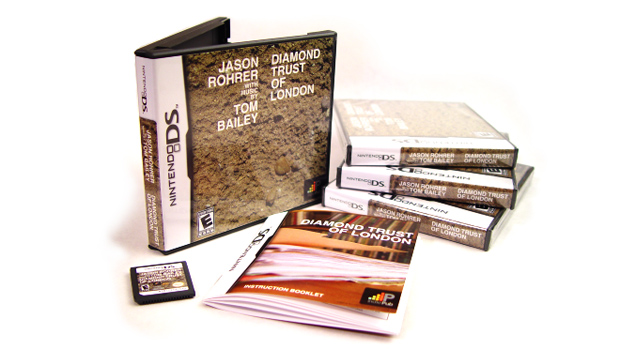 Four months ago, indie developer Jason Rohrer (Passage, Sleep is Death) ran a successful Kickstarter campaign to fund the manufacturing of Nintendo DS cartridges for his new game, Diamond Trust of London. Now, the carts have been made, the backers of the Kickstarter have had their copies sent out and the remaining copies have been put on sale through the game’s website.

A copy of Diamond Trust of London, in which two players compete to get the most diamonds out of Angola in an eight-month period, will run you $30 (plus shipping). It’s definitely a niche title, more or less a board game enhanced with the ability to reveal information to one player without the knowledge of the other. According to the game’s official website, there are still over 4000 copies available as of the time I’m writing this post.

If you’re interested, try not to tarry. I wouldn’t be too surprised if it sells out just because it’s an inventive concept from a clever dude. Hell, I bought one.