This game makes me grin

In a room full of peers I embarrassed myself. A few weeks back, I found myself in a meeting room along with folks that head up a lot of the other gaming websites and magazines in America. After a brief presentation, Atlus started to ask the group for a few volunteers to be the first to play Shin Megami Tensei IV. Before their sentence finished I found my peers laughing at me. They were laughing at a grunt that came forth from my mouth, almost involuntarily. I found myself frantically waving my hands in the air, insisting to be among the first to play.

The duty of protecting the realm of Mikado isn’t one you choose — it chooses you. This duty falls on those chosen during a sacred ceremony. All that reach age eighteen must participate in this ceremony to determine whether they become Samurai or not. Being chosen to perform this duty sounds like it should be an honor, but at the point I jumped into SMT IV, it seemed that not all of the protagonist’s friends were thrilled about it. Being one of the chosen involves slaying demons, but it seems that there are darker secrets in store for new recruits. Beyond this, new samurai don’t have a choice in the matter — this will be their calling, like it or not.

My playthrough seemed to be from early in the game as it felt like the demo had me working through a training dungeon. The battle system’s options were open to be fully explored, so I immediately jumped into demon negotiation, one of the franchise hallmarks. I liked that the presentation of demon negotiation has seen a bit of an upgrade. Demon faces now take up the entire top screen, making negotiation more of a face-to-face affair than before. Choices show up on the bottom screen, while conversation takes place in a word bubble on the top screen. From what I saw, demons in SMT IV have a lot to say, making negotiation even more enjoyable. Expect lots of gibberish and crazy talk. 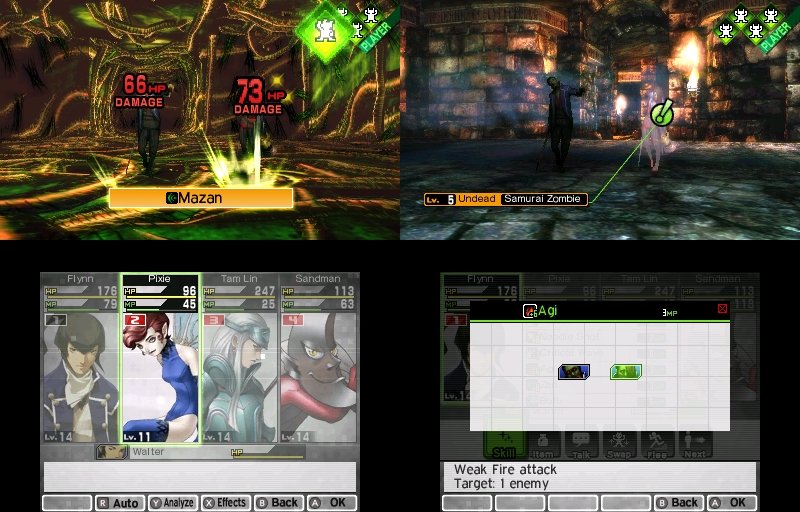 It’s not just demon negotiation that has seen a visual upgrade. Actually, everything in SMT IV looks fantastic, from the clean menu and command systems to the slick game world overlays that prompt the player for interactions. The overworld immediately impressed with its full 3D graphics, smooth framerate, great lighting, and sharp textures; SMT IV looks far better than Atlus’ last 3DS title, Etrian Odyssey IV. Though the demo area was small, running through this training dungeon felt less like moving through a series of corridors and more like my party and I were exploring the world. This is a world I’m more than ready to see more of.

Oh, and it all looks great in 3D. Understand that I’m totally happy to never play another game in 3D on the 3DS — the feature doesn’t do much for me. But Atlus suggested that we try it out, and when I did I was pleasantly surprised. With 3D on, dungeons gain depth, and battle presentation is a bit more flashy. Your mileage may vary, but I’ll be playing this game with 3D on.

Atlus makes full use of the two 3DS screens, spreading battles so that enemies and attacks are shown on the top screen, while menus and commands are placed on the bottom. Again, the presentation is sharp, with small but clear menus and commands listed. Four columns show your party’s vital stats, while a horizontal bar below it shows available battle commands. Selection of any given command brings up a menu for further input — for example, a list of available skills. Flashy animations for attacks are shown on the top screen. While enemies are limited when it comes to battle animation, the look has been upgraded quite a bit over past Atlus portable titles. Overall, the presentation is very modern and polished.

The battle system itself hasn’t changed as much, though. You’ll still jump into turn-based battles where your party of up to four (you and three other demons) gets one attack each against encountered enemies. When roaming on the map, you’ll be able to try to get a sword swing in on field enemies to get the jump on them in battle, just like you could in Persona 3 and Persona 4. And Atlus knows that RPG fans love their Press-Turn system, so it is still in place, with little changes in its weakness-exploitation-to-gain-another-turn structure.  In fact, all of the battle options — attacking, fleeing, and demon negotiation — are just as you’d expect. 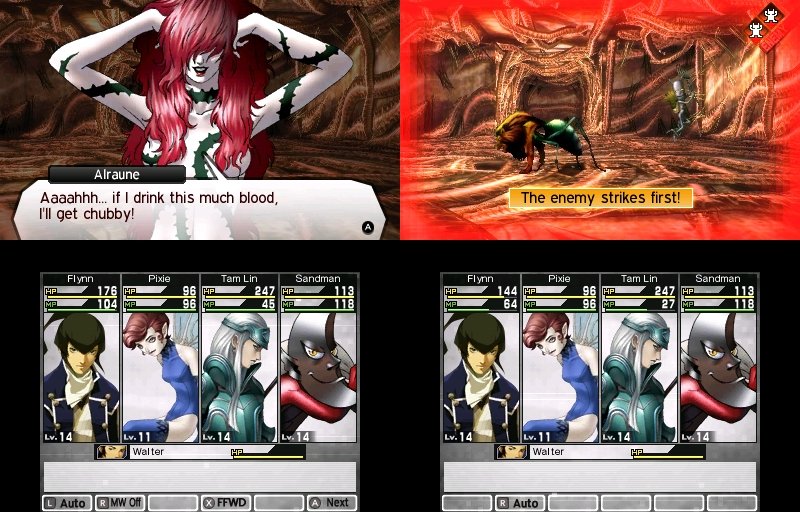 The grin (or smirk) system was my only real new battle experience in this demo. Exploiting an enemy weakness a few times has you or your allies grinning, which gives you advantages in battle, like stronger attacks. Know that your enemies can also grin, letting them land critical hits on you. Atlus explained that the grinner is also less likely to suffer from critical damage. Even in what looked to be a training dungeon, it seemed that Atlus kept the difficulty level up — it seemed like everyone was grinning at me!

Another new system I experienced is called the Whisper System. From what I could tell it allows demons to pass along one of their skills to the protagonist. In toying around with some demons in a second demo from later in the game, I was able to pass on the Dis spell from a demon that I had been trying to level up. This is just another option for character customization.

The only other system change I encountered has no bearing on gameplay at all, but still looks to be pretty fun. Equipment changes are now reflected in the game’s world. In the second demo I tried, I was able to dig into the available weapons and armor and dress the protagonist up to my liking. Of course, each piece of equipment has status perks and effects to go along with its visual effects, so your choices are going to need to be more focused on stats than aesthetics. That said, it seems that there are multiple choices for many armor types. For example, I saw different color variants for the same piece of armor. I trust that Atlus had fun with this feature, and expect that we’ll find some pretty weird stuff in the game to wear further in. 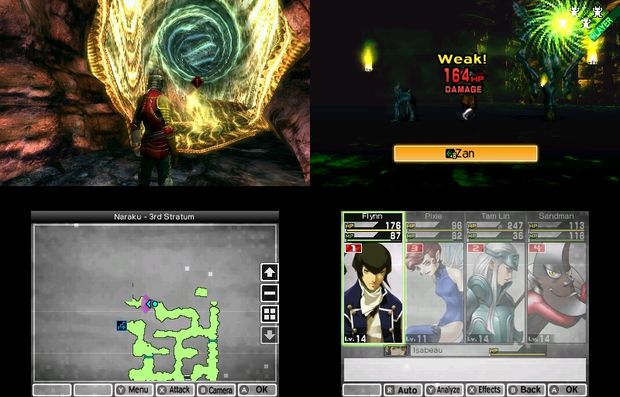 I got just a small taste of the story progression and battle system with my time. It was a pretty standard session for an Atlus RPG: a dungeon crawl, a slightly ramping difficulty as I progressed, and a final boss battle with a demon that loves sexy talk. But this was enough to win me over.

Here’s the deal: Shin Megami Tensei IV is sharp looking, deep, lengthy (over 40 hours), and fully portable. It appears to be a full-blown RPG, and not an abbreviated experience for portability’s sake. It’s got fantastic music, eye-catching artwork, and top-notch voice work to boot. That’s all great. But most importantly, it’s the direct continuation of the core Shin Megami series — something fellow fans have been waiting for.