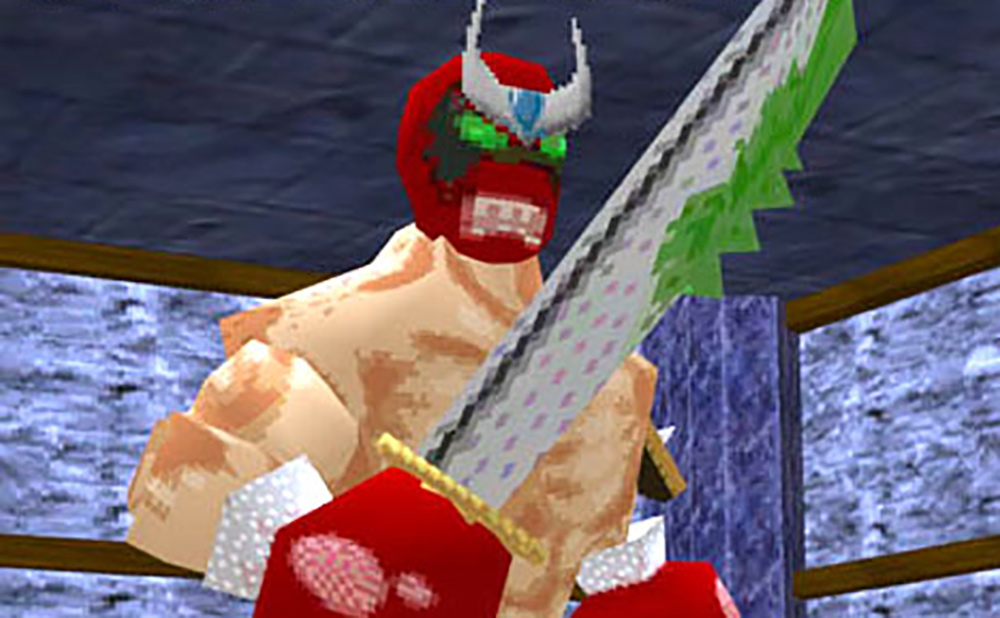 Five months and five episode later, Strong Bad’s Cool Game for Attractive People Season One has come to a close. Anthony Burch and myself have teamed up to review every episode released thus far, and though I’d be lying if I said that our mutual enthusiasm for the series is as strong as ever, I can tell you that… we’re glad this is over. For me, Episode 4 was by far the low point in the series, and though Anthony liked it a bit more than I did, I get the sense that we both were heading into Episode 5 with low expectations.

The good news is, this episode is all about videogames. Is that relevent to your interests? If so, hit the jump for the full review.

The first thing this episode did right was acknowledge that the series is getting old. In much of the initial dialog from Strong Bad, he sounds bored, half-mumbling his introductions to the few items (like the metal detector) that he’s collected in every episode thus far. Strong Bad also makes a few cracks about how lame a game would be if you couldn’t ever die and had to constantly pick up random crap and show it to people, which is a perfect description of the point-and-click genre that Strong Bad’s Cool Game for Attractive People belongs to. These self depreciating cracks couldn’t have come at a better time, as after the last episode, my sense of comradere and shared sense of humor with the game’s developers was at an all time low. The fact that they seemed to know I was getting sick of their games, and that they were maybe getting sick of them too, actually did wonders for making feel less sick of them. 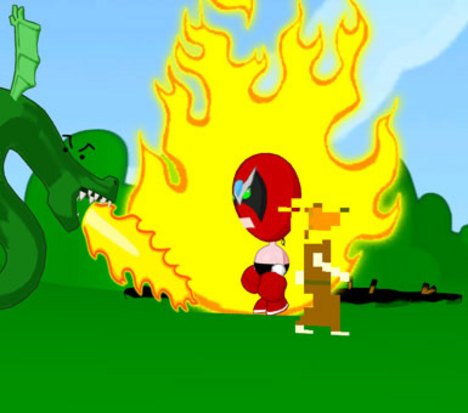 That said, self loathing irony will only get you so far, and for Strong Bad Ep.5 to make up for all the dull and cliche’ jokes in the last episode, it was really going to have to cut out the crap and give me non-stop entertainment. Does the game deliver?

Well, from a narrative perspective, the answer is “no”. There is no real story in Strong Bad Ep.5. Stuff does happen, but it’s all too stupid and random to call this stuff a “plot”. At the start of the game, Strong Bad accidentally breaks the reality barrier between his videogame world and the worlds of other Videlectrix games. In order to “set things right” he must travel to several other games so that he may collect the necessary items and allies needed to kill a muscular dragon named Trogdor. It’s kind of like a combination of the Last Action Hero and Bill and Ted’s Excellent Adventure, which is narrative equivalent of two amusingly retarded adults starting a family. With parents like that, of course the kid is going to be dumb. 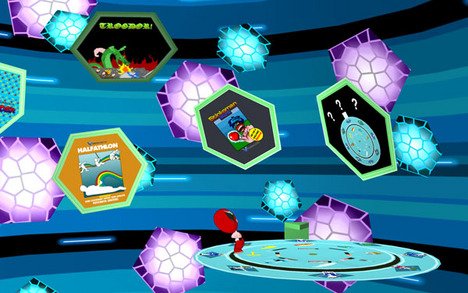 As harsh as that may sound, Strong Bad Ep.5 is no less stupid than your average episode of Robot Chicken, Family Guy, or other cultural reference-infused comedy. Like those shows, this episode is all style and no substance. It isn’t trying to make you think or tell you a story; it’s only real goal is to pay tribute to videogames of the past while simultaneously making fun of them. When it comes to doing that, Strong Bad Ep.5 is a huge success.

All of the earliest eras of gaming get a nod somewhere in the game, from the Atari 2600, to pre-Windows PC gaming, to the NES, and right up to the N64. Before the game is over, you’ll have become a one pixel character like the hero in the classic Atari game Adventure, been attacked by the very same scorpions from the original PitFall!, use a “copy protection decoder ring” to start up the game-within-a-game Peasant Quest, and pull off a kill screen in the Cool Spot influenced Videlectrix title Gel Arshie’s Pro Fruitboarder. That’s just scratching the surface, as the videogame references here are non-stop for the five to seven hours it takes to beat the game. There are even a few shout-outs to cartoon series that should have been videogames. Fans of ThunderCats in particular should keep a close eye out for a familiar weapon or two. 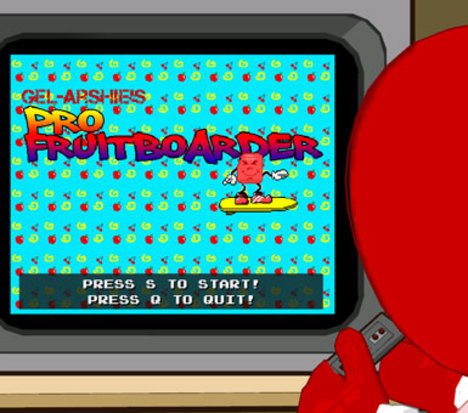 Speaking of weapons, you’ll also get to actually do some combat in this episode. About a third of the way through the game, you get a zapper-style light gun. You’ll need to to shoot ghosts, and later, a Wolfenstein inspired Gatling Gun-toting general (of sorts). This moment is especially cool because it involves the game’s HUD taking a sudden switch to a Wolfenstien inspired first person perspective. This kind of  HUD hopping happens a good amout, and provides much of the game’s more exciting adn amusing moments. My favorite parts of past Strong Bad episodes have been when the game breaks from the point-and-click format, and Strong Bad Ep.5 has the more of these breaks than any other game in the series. Some of the best  of these non-point-and-click parts of the episode aren’t even available for play until after you’ve beaten the game, which provides a nice reward for your post-game success.

Strong Bad Ep.5 is also the least linear of all the games in the series. There is a lot of stuff you can do in no particular order, and a lot of fun to be had just wandering between different games and seeing what happens. Additional points of interest include boss fights, I wanna be the Guy references, jokes about Pokemon, appearances from Videlectrix characters from all previous Strong Bad episodes, and a much more varied soundtrack than utilized in the prior games in the series. 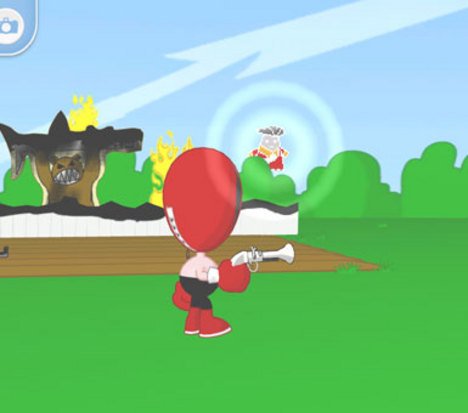 Will all that be enough to make you happy? Well, a lot of that depends on how long you’ve been playing videogames, and how easily entertained you are by references to games that you loved. Personally, I was so happy to see the scorpions from Pitfall! that I immediately wanted to show this episode off to other old-school gamers like myself. I also sat around in the StinkoMan game-within-a-game for more than a few minutes just to listen to the Mega Man inspired music that plays there. If these references mean something to you, you will enjoy this episode, as there is really no other game like it in terms of constant refrences to gaming history. To those who wouldn’t know Pitfall! from Pit Fighter, you’re likely to be bored out of your skull playing this one, as each and every inch of the game is coated in videogame nostalgia.

It would also be a problem is you’re the writer and director of a series that does an even better job than Strong Bad Ep.5 at paying tribute/parody to the world of videogames. If that were to be the case, I could easily see how you might email me before I’ve even started playing this episode to tell me it’s the worst one yet.

Oh, hey Anthony! How long have you been standing there? No, I wasn’t talking about you, I was just wrapping up my part of the review. Yeah, yeah, I know I forgot to mention that the puzzles in this episode were pretty crappy. I don’t care man, I still loved it. It’s the Pitfall! scorpions! There is something about them that’s just so freaking awesome. I know they’re just a bunch of white squares, but they still scare the crap out of me in a totally radical way. There is no way I could give a game that has those scorpions in it anything lower than a…

I’ve been standing here a while.

Yes, I hated this episode. I appreciate referential humor, and I loved the fact that the writers took literally every possible opportunity to reference videogames at any given point. The main dilemma with reference humor, however, is that it has to include humor. I love the Pitfall! scorpions too, but it’s not enough to just plop them in the middle of the game and call that funny. Not to mention that, if you’re in an adventure game, it wouldn’t hurt if that humor came from directly from the puzzles and gameplay. 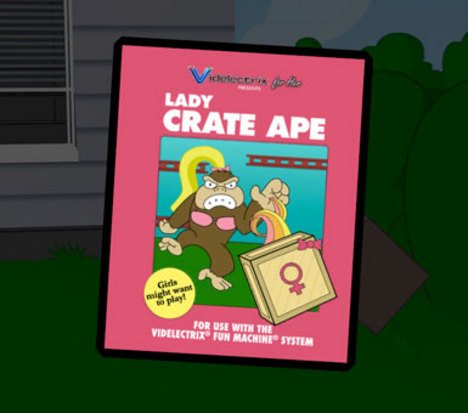 Rather than milking the episode’s remarkably cool premise for all that it’s worth by including self-reflexive meta-puzzles that cleverly cause the player to think in ways they hadn’t even considered before, 8-Bit is Enough includes the easiest, lamest puzzles I have ever experienced in any adventure game, ever.

You can literally get through the entire game pretty much just by clicking on everything you see exactly once, and occasionally using really obvious inventory items on really obvious puzzles. At no point in the game did I come anywhere close to being stumped, save for one remarkably irritating Stinkoman section where it turned out that I had to click everything on screen twice, rather than just once, in order to proceed. 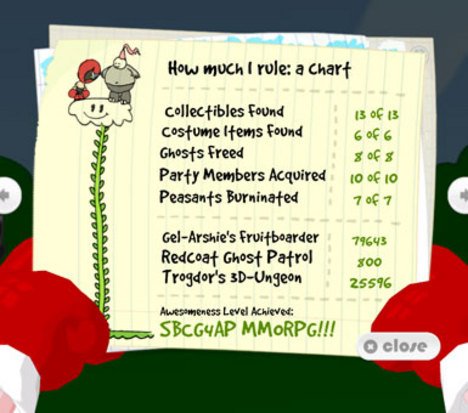 I’m really at a loss for things to say about 8-Bit is Enough, because its flaws feel so self-evident and all-encompassing: none of the jokes are funny (I say this as a longtime Homestar Runner fan), the puzzles are horrendous, and the execution doesn’t live up to the (at times interesting) premise. Overall, 8-Bit is Enough is a remarkably depressing way to end this charming, if flawed episodic series.

Score: 2.0 — Bad (2s are a disaster. Any good they might have had are quickly swallowed up by glitches, poor design choices or a plethora of other issues. The desperate or the gullible may find a glimmer of fun hidden somewhere in the pit.)

Combined Score: 4.5 — Below Average (4s have some high points, but they soon give way to glaring faults. Not the worst games, but are difficult to recommend.)