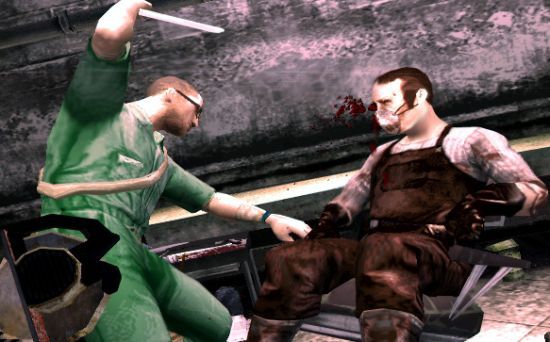 Yeah. It’s that sort of a game.

Ignoring all of the BS politics of making a game that entertains solely through violence, or the possible repercussions of selling such a game, only one question matters: is the damn thing any good?

First things first: you probably want to know how bad the blurring effect is in the game’s executions.

I assume it’s much, much worse on the PS2 and the PSP as you don’t get motion controls to vaguely clue you in as to what the hell your character is doing, but even on the Wii some of the more gruesome kills in some of the darker locales are really damn hard to make out. You get a vague idea as to what’s happening, but it’s impossible to go through a single execution without feeling a great deal of irritation at the fact that what you’re watching could have been much more gruesome and descriptive.

And don’t kid yourself — the only reason to play Manhunt 2 is the violence. Anyone who played the first Manhunt knows the gameplay isn’t particularly good, the graphics are dark and grimy, and only the slightest traces of a story are present. In this respect, Manhunt 2 doesn’t fall too far from the franchise tree.

I’m not quite sure how to summarize the story. Explaining the main conflict might spoil a major plot twist for you, but I’m hesitant to even call it a twist in the first place. Anyone with the slightest amount of intelligence will understand the relationship between the protagonist (Danny Lamb) and his friend (Leo) within literally ten seconds of seeing the two of them interact. Still, the Manhunt series has never really been targeted toward those people gifted with an overabundance of brains — perhaps it’s better to leave this plot detail unspoiled. Suffice to say, Danny Lamb escapes from a hospital with mild amnesia, and has to spend the game’s 4-7 hour runtime killing his way to the truth. There are some interesting moments in the game’s narrative, but, overall, it’s superfluous at best and infuriatingly hypocritical at worst (near the end of the game, Danny tries to stop his violent nature by getting rid of a character who forces him to commit murder. He gets rid of this character by stabbing him in the neck with a syringe and beating him to death with a shovel. Yeah, right — yay for nonviolence). 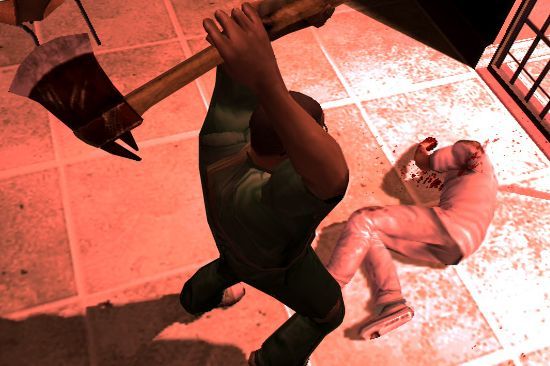 The majority of the gameplay still revolves around stealthily hiding in shadows and taking out “Hunters” — a nondescript, catch-all term for anyone who wants you dead. Thankfully, Manhunt 2 is nowhere near as linear as its predecessor in terms of immediate local agency. The maps still consist of a pretty straightforward A-B route, and the game is still pretty damned linear when taken on its own, but, unlike the original Manhunt, the player isn’t forced to use only a melee weapon or only a gun. The first game forced you to use silent executions with melee weapons for about 70% of its runtime until giving you a gun (and only a gun) for the final 30% — Manhunt 2 pleasingly cuts through the crap by giving you a gun and a melee weapon relatively early in the game, and allowing you to choose whether you want to stab, bludgeon, or shoot your way through the game.

However, beyond this little bit of choice (which will only be of note to those who played the first game) there’s nothing even remotely interesting about Manhunt 2’s gameplay. You run for a while, you hide in shadows, you gruesomely kill a passerby, you shoot a few Hunters, you run some more. Rinse, repeat. Nearly every aspect of the gameplay is uniformly mediocre: the braindead AI will walk around in circles or clip into walls, the Wiimote aiming is awkward, and many of the levels are so lazily designed that you can literally sprint from checkpoint to checkpoint, ignoring nearly every enemy around you, and complete each level in record time. It’s as if the game knows that anyone who would play it is only doing so for the gruesome executions; the levels are designed with the assumption that the player is looking to maliciously linger on the deaths of his enemies, rather than attempt to simply move past them and further the narrative. As such, they’re incredibly boring.

I’d also like to point out two particular aspects of the gameplay which, quite honestly, pissed me the hell off.

Firstly, the developers also included some half-assed attempts at changing up the gameplay by implementing pointless obstacles like locks or jammed doors. Upon reaching these obstacles, the player is forced to search the entire damn level for a crowbar which a single, random enemy happened to carry. If you can’t find the crowbar, you can’t proceed. At one point, I spent literally a half hour searching the final level for a stray crowbar an enemy had dropped a few miles back; I needed a crowbar, evidently, but the game didn’t bother to tell me that until twenty minutes after I’d killed the only guard who carried one. A great deal of backtracking, nook-searching, and profanity followed. 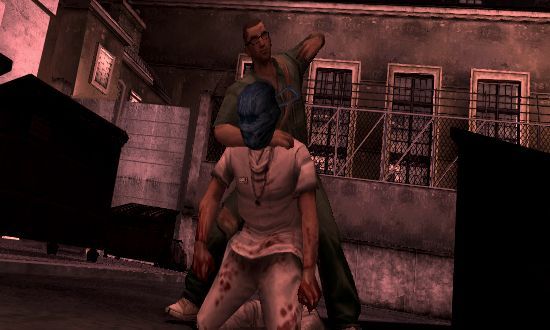 Secondly, it’s impossible to skip any of the in-level cut scenes. This wouldn’t be so bad save for the fact that any frigging time you die, you have to rewatch the most recent cut scene which played at the start of the last checkpoint. Forcing the player to sit through the same damn cut scene over and over and over just for accidentally dying may well be one of the stupidest game design choices I’ve seen all year.

Oh, by the way, the graphics suck. I state this as a fact, not as an angry point of irritation: I’m not really a graphics guy, but I know ugly, and Manhunt 2 is ugly. The character models are blocky and decidedly last-gen, even on the Wii, and the environments are drab and dark and grimy, and not in a moody or unsettling sort of way. I’ll admit that the character animations are really good, especially during melee combat or the execution cut scenes, but, other than that, Manhunt 2 just ain’t pretty to look at.

Negativity aside, however, Manhunt 2 does do a few things right. When the player is hiding within shadow, for instance, a Hunter might run up to the dark area and study it, looking for any signs of movement. At this point, a short but well-integrated Wii minigame (of sorts) occurs. Upon the Hunter’s arrival, the player has to keep the Wiimote as still as humanly possible; if it moves too much, the Hunter will notice the movement and attack, but if the player can keep the Wiimote steady for ten seconds, the Hunter will move on and expose his back to the player. Visually, the minigame is implemented in a simple and straightforward manner (a wobbling dot appears onscreen to show you how much you’re inadvertently moving the Wiimote, and in what direction, while a circle surrounds the dot to show you how much you can move the Wiimote before the Hunter notices you), and it adds a great deal of physical, Wii-specific tension to what would have been an otherwise drab few seconds of passively waiting for the Hunter to pass.

Additionally, the motion-based fistfighting system works pretty well. It’s not The Godfather: Blackhand Edition by any means, but I never had to worry about the game not recognizing my blows — when I punched with the nunchuck, Danny punched with his left arm, and when I punched with the Wiimote, Danny immediately threw a right. As with the hiding minigame, this little bit of Wiimote functionality made a potentially boring-ass event (in this case, non-execution melee combat) a great deal more fun. 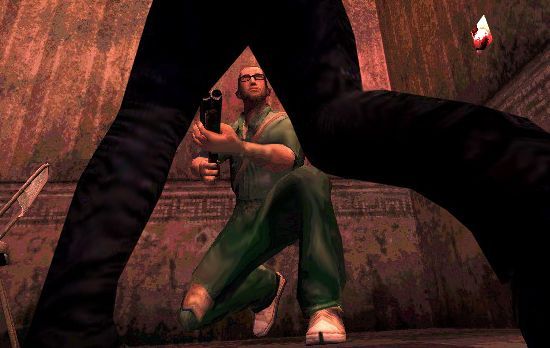 Here’s my main problem with Manhunt 2: it exists solely to provide its audience with the most gruesome, disgusting deaths it can possibly muster. Now, we can debate whether or not that’s a good thing until the clichés come home, but that one part design principle becomes problematic when you can no longer provide that one thing to your audience. For a game which lives or dies on delivering awesomely horrific kill sequences, Manhunt 2’s enforced censorship has essentially removed any reason for the game to exist. Period.

As it stands now, Manhunt 2 acts as the worst of all worlds; its non-gameplay will irritate gamers who actually want to enjoy themselves, its presumed violence will send the media into a frenzy and send public opinion of videogaming back another five years, and its relatively low level of visually clear violence will disappoint gorehounds who just want to see a bad guy get his balls ripped off with a pair of pliers. Yeah, the Wiimote implementation is pretty interesting at times (enough so that I’d refer to the Wii edition as the definitive version of Manhunt 2), but there’s just no damn reason to actually play through the few hours of gameplay Manhunt 2 has to offer.

If you’ve got a Wii, buy Zack and Wiki instead. Maybe then, the media will focus on the epidemic of excessive happiness amongst Wii owners rather than worrying about our propensity to commit real-world murder triggered by crap videogames.