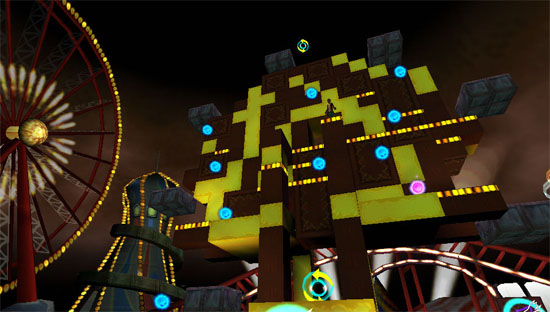 After getting my hands on Super Paper Mario, I started seeing 2D platformers differently, in that hey, I wonder what’s behind that-there pile of blocks sort of way. I imagine I’m not the only one. Now that gamers raised on X and Y only are the ones making games, it’s likely that we’ll see a lot of screwing with 2D vs 3D in games to come, and Crush is the latest in that progression.

You might remember me crapping my pants over the first videos of Crush released about five months ago — I am pleased to report that the pants-crapping was merited, indeed. If you’ve been considering the purchase of a PSP and looking for that one game to knock you off the fence, this may very well be it.

Despite my best efforts (those efforts being wishing really hard), the PSP doesn’t yet have the most compelling library — at least, not so much compared to its competitor, Nintendo’s immortal DS Lite. It’s difficult  to explain why I love my PSP without saying anything that violates my warranty — in the entirety of my library, only four PSP games aren’t ports. This isn’t to say that the games that are ports are bad or anything — games like Power Stone and Street Fighter Alpha 3 fit quite well on my little misbegotten handheld. As for original killer apps, though, it’s a bit sparse. Things are changing, though — had I not been so foolhardy to buy a PSP at launch, Crush would’ve been the game to get me on board.

Unlike many DS games and a handful of standout PSP titles (Metal Gear Solid: Portable Ops being one of them), Crush doesn’t do anything that is particular to or representative of the platform it represents — indeed, Crush could exist on any system, console or handheld alike. Where Crush succeeds, it does so due to its standout concept game play, art direction, and challenge. It’s a puzzler the likes of which I’ve never played before.

Crush is all about Danny, an insomniac who carries a heavy burden of memories from his past. His aversion to traditional medicine leads him to Dr. Reuben, a mad scientist with an invention that might help Danny: a hypnosis-inducing helmet called C.R.U.S.H. In this state, Danny is to get his mind straightened out by working his way through dimension-bending puzzles, which if you think about it, is just like psychiatry as we know it today. Story of any sort seems parenthetical to the experience as a whole — puzzlers rarely need ’em, after all — but it certainly adds to the game. Cutscenes are illustrated in Crush‘s distinctive art style and shuffle Danny’s saga along while the player negotiates the hazards of his cluttered mind.

In a lot of ways, Crush operates like a traditional, severely limited platformer. Levels, 40 in all, take place in one of four “theme” tilesets like the inner city and the seaside, with appropriate music and atmosphere to complete the picture. These levels operate as platforms suspended in the air built out of sharp, angular blocks that create the landscape that Danny must negotiate to clear his head. Danny can walk, run, and jump short distances, but that won’t get him very far — to advance, the player must “crush” the level’s three dimensions, creating 2D from 3D. This part’s complicated, so I’m going to dedicate another paragraph to it. I’ll see you there.

Hi, glad you made it. Anyhow, movement of the camera — not a fluid, smooth movement, but a strict and segmented selection of camera angles — is paramount to the game flow of Crush, as the camera’s angle on the action determines how the level will be “crushed”. So, here’s an example: let’s say you’re standing on a platform, and way in the distance — away from the camera’s perspective — is an item to be collected. The item sits atop a plot of ground that has no connecting bridges, no obvious means of approach, but it is level with the platform you’re currently standing on. By crushing, the world is made 2D and the two platforms become the same straight line across the screen. By moving to the item’s location and uncrushing, Danny finds himself on the same distant platform — this is the heart of Crush’s gameplay.

It sounds complicated, and it can be — at first. But after a few levels of Crush having its way with your puny, puny mind, you’ll begin to see level structure in a whole different way. Through your time with the game you’ll be introduced to a series of new mechanics of gameplay, but they’re pretty quickly assimilated and and always (always) give crushing front seat in the flow of things. Gears can be operated when crushed into alignment, and massive, hulking bugs can be dealt with by crushing them against impassable blocks. Once you get the basic formula down, you’ll be good to go.

But I don’t mean for a moment to suggest that Crush isn’t challenging. Some of the game’s later stages will have you pulling your hair out, but in that really good, “there’s no way I’m this stupid” sort of way. This sets it apart from many other puzzle and adventure games — Crush is never unfair, and it never pulls any dirty tricks on the player to artificially inflate difficulty or length of play. In the event that a puzzle proves simply too challenging to tackle on your own, a hint system — activated by a quick tap of the triangle button — will gently nudge you in the right direction, complete with a camera cue. It’s a guiding hand that will keep frustration to a minimum for most, and save your PSP from sudden and angry defenestration for others (me). The level designs, meanwhile, take full advantage of the gimmicks at work and are pretty damn brilliant at times.

The game is visually striking but suffers from a pretty common drop in frame-rate, and once you get accustomed to the general layout scheme, the ten levels within each of the four themes pretty much all feel like the same level, barring some pretty intense structural variety — the clock tower stage is one of the coolest level designs I’ve seen in recent years. I wonder, also, why this game necessarily had to appear on the PSP — again, I’m not at all opposed to the platform getting some truly A-list titles, but I get the sinking feeling that this game is going to be a sacrifice to the PSP’s somewhat niche audience instead of getting the attention it deserves. Also, a game as ambitious as Crush might’ve been better realized on a platform capable of really doing the game justice. But then, I’m so enamored with Crush that I want to see it on PS2, XBLA, PS3 — hell, put it on mobile phones, I don’t care. So long as everybody gets a chance to play it.

If you’ve got yourself a PSP, run (do not walk) to your nearest retailer of choice and pick up a copy. It’s rare that a game as ambitious as Crush achieves what it set out to do, and the developers at Zoë Mode ought to be showered in cash and virgins for pulling it off. Picking up where Super Paper Mario left off, Crush provides a stage upon which careful reexamination of the conventions of gaming is possible; it’s just about the most rewarding experience yet available on the PSP. Don’t miss it for nothin’.