Yesterday we decided as a staff which starter Pokemon were best and which were worst and I decided, personally, that my friends and colleagues were a bunch of jabronis who do things like rank Froakie too low, rank Piplup too high, and don’t lay the smack down on Torchic’s dumb ass.

But after we went live with the definitive, canon starter rankings that Nintendo is legally obliged to honor from here on out pursuant section 6, article 9 of our contract, I figured I’d leave the wheel of democracy open to y’all, linking the same poll we used. I mean, I spent 30 minutes looking for poll sites and setting up the damn thing, why not.

Over 100 more responses came in (on top of our originals) and holy shit you guys suck more than the jabronis I work with! You collectively failed to elevate Froakie beyond one place higher while also rocketing both Mudkip and Torchic into the top ten. Clearly you are all unburdened by good taste, which is probably why you read Destructoid.

It’s worth noting again that these results are meaningless except for the rhetorical purpose of ridiculing you all to spur further interest, debate, and blood feuds among former allies. If you are looking for the official, Nintendo-approved starter Pokemon ranking, click here.

But the main thing I wanted to highlight is this: Everybody hates Popplio.

Don’t believe me? I have a graph, mother fucker! 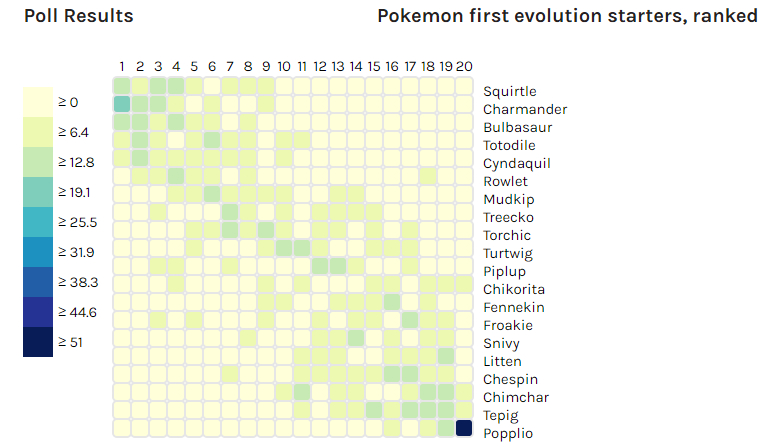 Look at that square that represents the number of last place votes for Popplio. It’s darker than your cruel, cruel hearts.