You’ll have to dream of Electric Sheep a little longer

CD Projekt RED has just announced that it will be delaying the release of the highly-anticipated RPG Cyberpunk 2077 by five months, shifting its launch date from April 16 to September 17.

The news was announced on Twitter, where the Witcher developer revealed it needed more time to fine-tune the ambitious RPG. “We are currently at a stage where the game is complete and playable, but there’s still work to be done,” reads the official statement. “We want Cyberpunk 2077 to be our crowning achievement for this generation and postponing launch will give us the precious months we need to make the game perfect.”

Cyberpunk 2077 joins an ever-growing list of new video games that have been pushed back from their initial releases, including Sony’s The Last of Us Part II, Square Enix’s Final Fantasy VII Remake and The Avengers, and Ubisoft’s Rainbow Six Quarantine and Watch Dogs Legion. Given the excitement and hype around CDPR’s techno adventure, it’s best that the studio wishes to take its time and deliver the best experience possible, while also decreasing the pressure on the developers themselves. 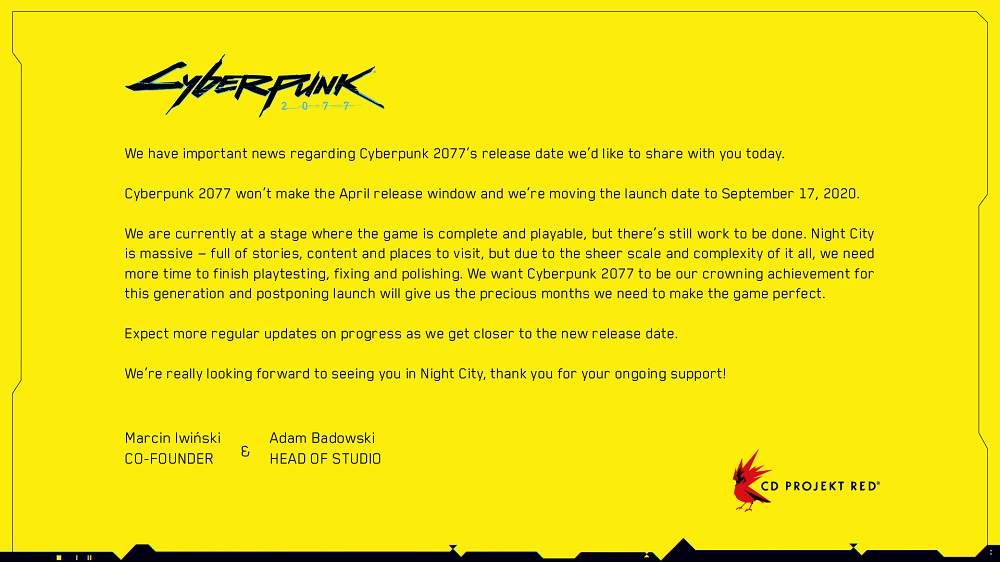