Cyberpunk 2077 also has a major update and expansion in development

The wait for the next-gen versions of Cyberpunk 2077 (and also The Witcher 3) continues, as expected. When CD Projekt Red last checked in, the company said it was aiming for a Q1 2022 release for the former and Q2 2022 for the latter. Today, with the latest earnings report, that’s still the case — the PS5 and Xbox Series X/S versions are “on track.”

In the Q3 2021 earnings report, the exact phrasing is that the “next-gen versions are on track to meet their target dates.” This follows last month’s updated timeline.

The earnings report also touches on the mobile game The Witcher: Monster Slayer and the acquisitions of Digital Scrapes (now CD Projekt Vancouver) and The Molasses Flood. While the Canadian team is on deck to support “ongoing projects,” The Molasses Flood is making a new game based on one of CD Projekt’s IPs, which should be interesting given the team’s track record with games like The Flame in the Flood and Drake Hollow.

While work continues on Cyberpunk 2077 and its expansion, there’s been a “gradual shift to new projects.” On page two of the earnings report, you can see a visual representation of how the different teams are allocated and how that’s been shifting in recent months. 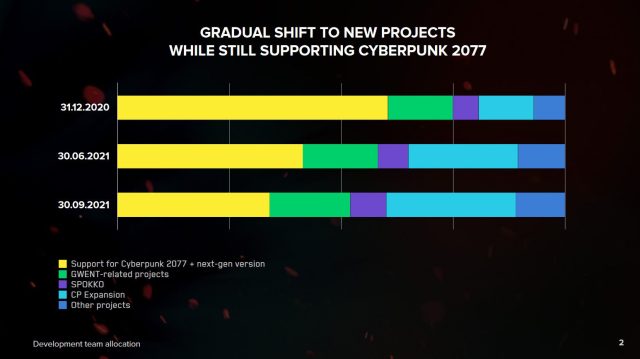 With everything that has gone wrong for Cyberpunk 2077, it’s good that the Witcher 3‘s next-gen version is spaced out a bit. You’d have to think that the powers that be won’t want to risk another sloppy launch — for many people, the PS5 and Xbox Series X/S versions will be the “second chance.” The situation has improved on PC (and players’ sentiment is starting to reflect that), but console players have had really a rough go.

Is it too little too late, or are you feeling optimistic? I imagine plenty of folks picked up Cyberpunk 2077 in a dirt-cheap deal last week with Black Friday savings everywhere and are waiting for that free next-gen upgrade. When the price hit $10, I was tempted.