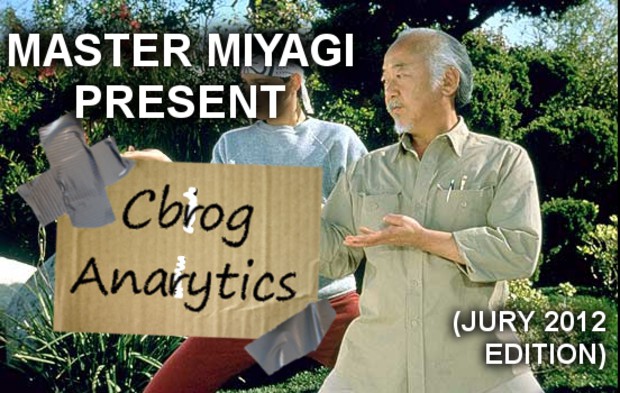 [Dtoid Community Blogger Altum Videtur spends an unfathomable amount of time each month analyzing and recapping everything that gets posted in our Community Blogs, so it’s time the man got some recognition. Seriously, what a fantastic feature! Want to see your own words cataloged in next month’s Analytics? Go write something! –Mr Andy Dixon]

What’s that, Lassie? No games came out in July, so everybody’s getting flustered by sexism controversies instead? Oh no! Well, my mission is still unchanged. Numbers care nothing for misogyny, misandry, or any such accusations; they contain only the distilled truth, free from such hazy and subjective lenses. That’s why I failed Algebra in middle school and ended up writing words!

Interestingly, more overall activity happened in this month of no games than in the month of E3. Does that say more about E3, or about us Cbloggers? Who knows; it’s for you to decide! If you need some more numbers to help you along your way, don’t forget to check last month’s edition to see how things changed for July in more detail.

Remember: If there’s something I haven’t covered that you want to see next month, post it in the comments!

In total, 441 blogs were posted this month!
-(That’s 41 more than last month’s count of 400!)
–Considering that less “stuff” happened this month, the increase is surprising. With the summer game drought ready to end this August, this hopefully means some hardcore blogging is on the way.

The most-blogged day was Tuesday the 10th, with 23 blogs!
-(That’s 3 more than last month’s most-blogged days!)
–This month’s Bloggers Wanted topic kicked in around now, which brought what would’ve simply been a high-activity day to the top of the pack.

On average, there were about 14 blogs a day!
-(That’s 1 more than last month’s average!)
–Another +1 to the monthly average! When charted, July’s blog output appears to be much more bipolar than in previous months, comprised mostly of high highs and low lows which balance each other out. As is beginning to become typical, a deluge of hot topics early in the month inflate those first few numbers, causing a somewhat misrepresentative downward slope in a simple trendline. 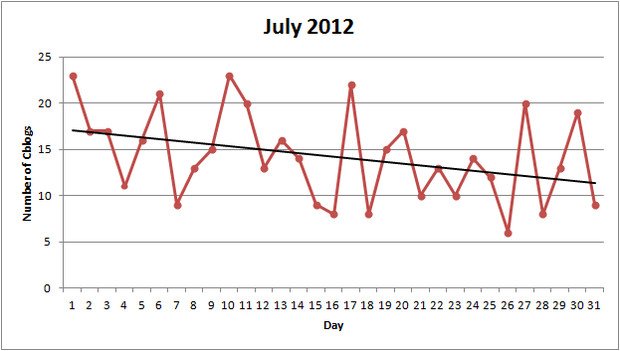 The flavor of the month was Tropes vs. Women, which was written about 8 times!
-(That’s 28 less than last month!)
–Like last month, things which are more about sexism in general go there, while stuff that’s more about Sarkeesian herself go here. This stat being so much lower than June indicates how there really wasn’t a large-huge thing that turned all the heads this month, which isn’t necessarily bad.

This month’s Bloggers Wanted topic prompted 23 blogs to be written!
-(That’s 13 less than last month!)
–Man remember when we’d get four BW topics a month? I know it’s been spaced out to give more people time to write but it’s starting to make this stat feel a little redundant.

This month’s Artists Wanted topic prompted 14 blogs to be posted!
–New stat! 6 trailed in from last month’s Behind Closed Doors, with the remaining 8 centered around Role Reversal.

About 86% of blogs were varied enough to have less than 5 blogs per topic!
-(That’s 1% more than last month!)
–Keeping in mind that there were a good few more blogs this go around, the 1% increase is larger than it might at first seem. 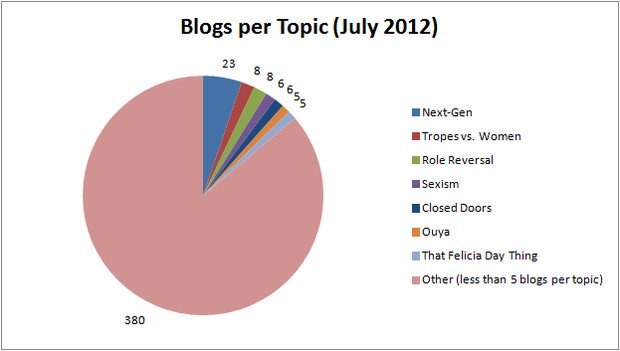 The most commented blog was Patriarchy: 4 out of 12 shooting victims died protecting their girlfriends, by Shinta, with 32 comments!
-(That’s 37 less than last month’s most-commented blog!)

On average, there were 104 comments a day!
-(That’s 21 more than last month!)
–Another increase to add to the list. Unlike the blogs-per-day graph, this one’s a bit more consistent with the usual pattern — maintaining at a reasonably constant average, with a couple of spikes when either A. a very good blog is posted B. a very controversial blog is posted or C. a very popular blogger makes a post, or some combination of the above. 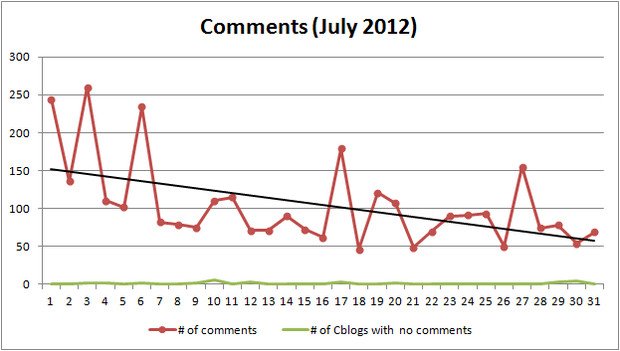 In total, the Dtoid community fapped 1695 times!
-(That’s 6 less than last month!)
–Oh, now that’s interesting. Why so surly this month, Dtoid? Considering that the month’s few patterns seemed to be defined more by controversies than game releases or announcements, this makes more sense the more I think about it.

The sluttiest blog was The Buy it/Avoid it Report :: Issue #010, by Corduroy Turtle, with 25 faps!
-(That’s 42 less than last month’s sluttiest blog!)
–Technically, SilverDragon1979’s last Cblog recap beat this out with 35, but as stated in the end-notes, I don’t count recaps toward the stats; that’s what these personal comments are for though!

On average, there were 55 faps a day!
-(That’s 2 less than last month!)
–Also as usual, the Faps follow much the same pattern as the Comments, minus B. a very controversial blog is posted (which accounts for the couple of instances where Comments have a large spike on a day where Faps don’t). 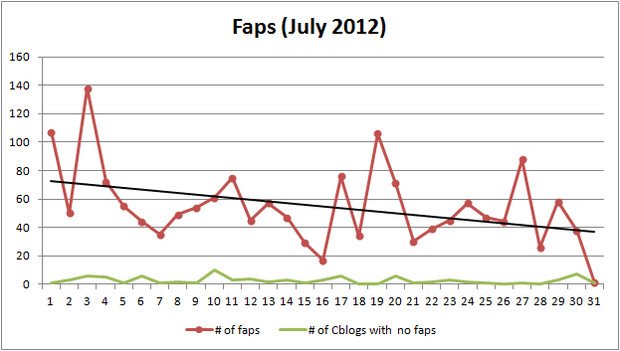 This month, 55 new members posted their first Cblog! (That’s 8 more than last month!) Were they good? Bad? Fun? Long? Short? Will they post again? Did they post 12 more times already? There’s only one way to find out! In order of appearance, they are:

-Until a better method presents itself, statistics are counted by hand, per-day. Comments and Faps are recorded at the end of the next day, to give the community ample time to read and respond. I also do my best to disregard obvious spam-posts, but I can easily miss one or skip over what’s actually just a really shoddy and self-aggrandizing but otherwise legit Cblog. This means that there are likely minor errors and inaccuracies present, but none of them should be significant enough to invalidate anything.

-Cblog Recaps and last month’s Analytics are not counted, but all other serials (like FNF) are, under the rationale that serials still exist for the purpose of “creating” content under a certain topic or theme, while the Recaps & Analytics merely seek to sort and organize the blogs.

-There is still some inherent subjectivity in deciding what constitutes a “unique topic,” so keep that in mind if there seems like there’s some obvious category that I’ve ignored (although feel free to tell me).

–Statistics are not intended to impart any kind of judgment or opinion in and of themselves. If I have any personal thoughts, they are noted below the corresponding statistic.