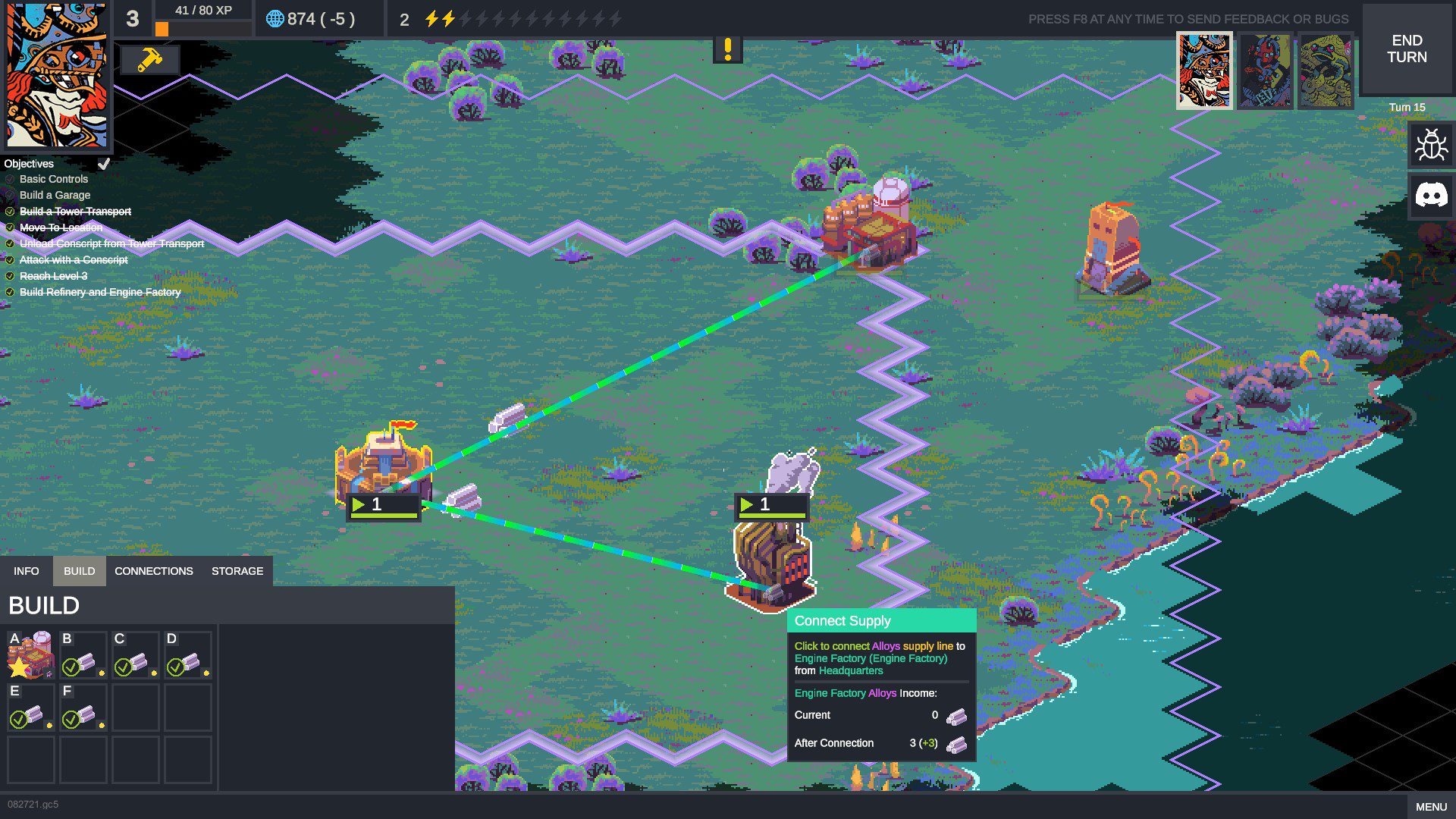 A clear line to the front

Cantata is a complicated game that does something of a double-first-impression. For the first few turns of Cantata, it might seem like an Advance Wars-alike, with a focus on turn-based strategy and units shuffling around on a tiled grid. It all seems straightforward, as your Conscripts march forward, gradually taking out machines as they go.

Then, you build your first supply buildings. And as the base building starts to expand from simple unit production to resource management and logistics, it becomes apparent Cantata has a little bit more going on than units taking turns firing at each other.

This isn’t the first time I’ve seen Cantata around on the internet; it was one I quickly marked down as “watch this” when it popped up in 2019. And now, two years later, the Cantata team is showcasing the work done so far as part of Gamescom 2021. Yes, that includes a playable demo on Steam, available right now.

One thing that’s striking about Cantata is the style. Outside the game and around the periphery of the action, there’s some absolutely wonderful art. Massive robotic walkers, armor-clad warriors, and surreal alien life make up just some of the visuals shown off in the latest Gamescom trailer. Then you hop into the game itself, and units are detailed in some really well-done pixel art.

But when it comes to strategy, well, that’s where the fun starts. The demo has the first mission of the campaign, which introduces you to the core concepts of Cantata as well as the nuances of the faction you play as. Your empire is touching down to tussle with some machines, trying to take out a leader who’s escaped their demise thrice already.

At first, you just work with a Tower Transport, a giant building on wheels that houses Conscripts, your basic infantry. Machines show up, you shoot the machines. Easy enough, right? You can drop a few more, but be careful, as the global resources—a finite amount of supplies to use—can dwindle away if you’re not watching it.

To supplement your units, you’ll need to build factories and supply lines, to feed local resources into unit production houses that will beef out your forces. And in Cantata, it’s not as easy as sending an ore truck over to the Tiberium field or telling the workers to chop down some trees. You’re going to have to master supply lines. 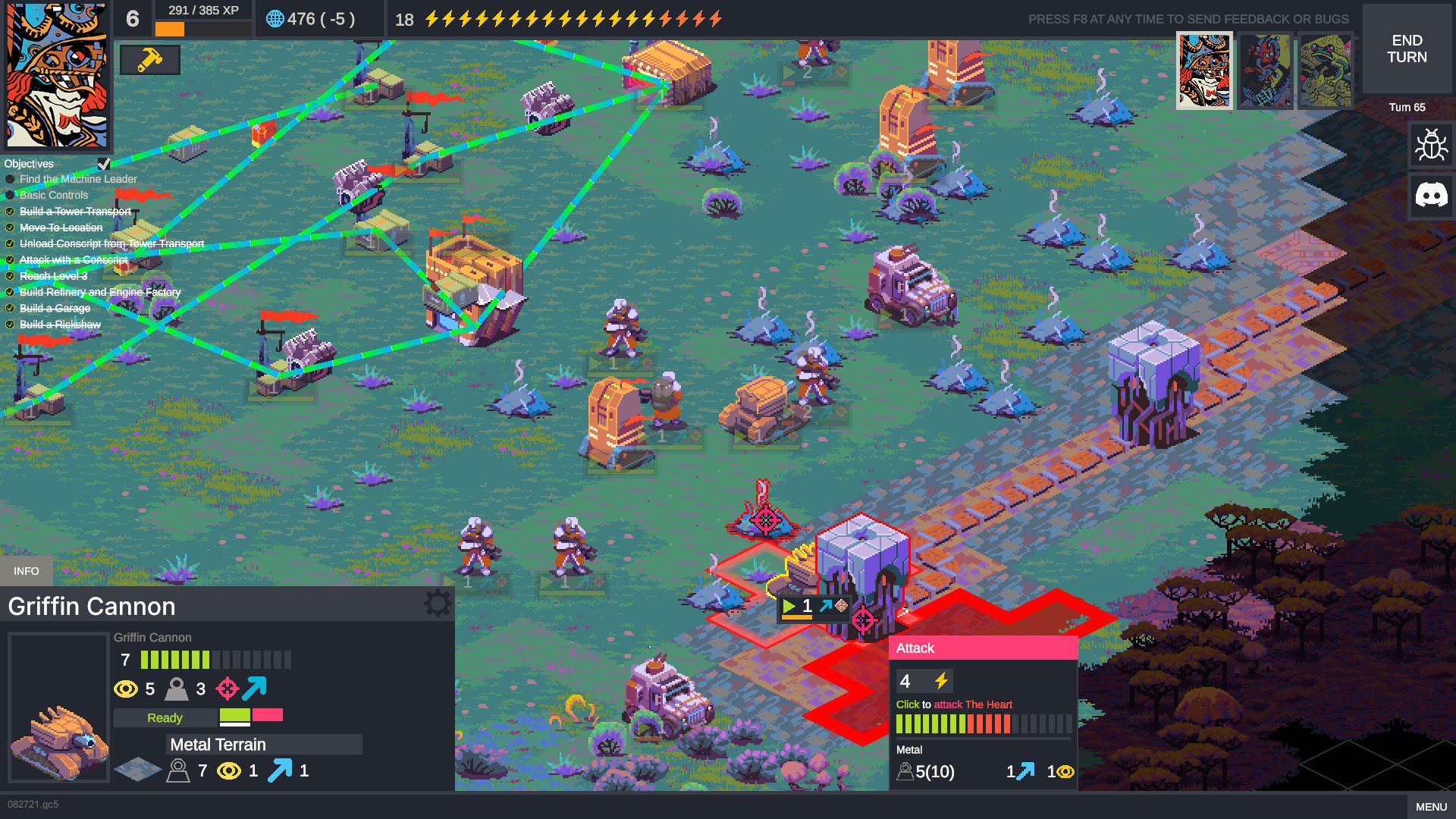 As alloys link out of your base and into different resource buildings, you can start to build up different resources for production, and then use those lines to build units directly on the frontlines. Sick of spending half your AP every turn just getting units closer to the action? Maybe you can build a Garage right behind your offensive, and reinforce at the heart of the battle.

Of course, there’s risks and rewards for that kind of approach. When I got a little too confident with how close my buildings were to the front, the A.I. was happy to send a few bots at my precious buildings and put the whole operation in danger. But putting the through-lines of my production too far back meant spending turns moving units up, while my forces in the front got battered with no chance to respond.

That balancing act seems like the heart of Cantata, as the map kept expanding ever-outward. I was constantly having to find ways to keep my supplies moving forward, and pull in new sources, to battle back the enemy. I didn’t get far enough in the demo to see what the end result of a map’s worth of resource-networking might look like, but I did manage to make some pretty good spaghetti with my supply lines during my play session. Watching the demo that the Cantata team put up as part of Gamescom made me realize how much cleaner I could’ve laid out my base, to better manage my setup down the line.

I’m really interested to see how Cantata develops, especially as it includes the other factions and Commanding Officers it’s planning for. It’s also aiming to have online and local multiplayer, according to its Steam description, and “massive, accessible modding,” including importing your own sprites. After spending an hour playing the Cantata demo, I feel like I just barely scratched the surface of what this game is; and honestly, that makes me pretty excited for what it could become in the future. If you’re interested too, the demo’s out right now on Steam.