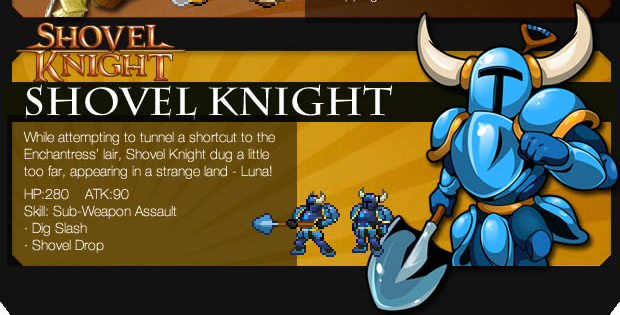 Joins Cryamore and They Bleed Pixels pals in the fray

C-Wars is coming. With 14 days left to go, the animations-heavy action/strategy choose-your-own-adventure game is already full funded on Kickstarter . That doesn’t mean the developers at Onipunks are resting on the laurels. They’re adding new stretch goals and features to the game all the time, like the inclusion a Shovel Knight from fellow Kickstarter success story Shovel Knight, who joins characters from They Bleed Pixels, Cryamore, and Wooden Sen’Sey in the crossover shenanigans.

C-Wars is looks darn fun, but the game isn’t in a highly accessible genre like Shovel Knight, nor do its developers have the same high profile pedigree as the gang at Yacht Club Games. I hope that doesn’t it prevent it from meeting that 3DS-port stretch goal. This is the kind of game that would look perfect on a little 3D screen. Vote with your dollars if you agree.