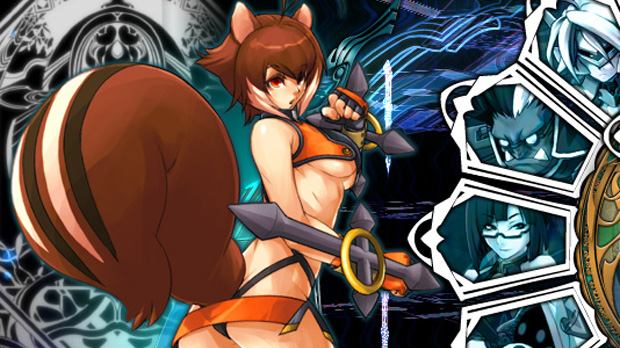 The new BlazBlue is coming to the PSP and the 3DS in the US at the end of May. The game is already out in Japan, where it sold fairly well on the PSP, but more-or-less bombed on the 3DS. My guess is that’s because as of right now, the PSP version of the game has Ad-hoc online play when streamed through the PS3, but no online play to speak of on the 3DS.

I’m still headed towards getting the 3DS version though, for the superior d-pad and the chance to check out 2D sprites on a 3D display. I’ll miss the online play, but with all the new single player content, I’ll still have plenty to do. For more details on the new single player stuff, and just about everything Continuum Shift II has to offer, check out the press release below.

So how about it people, you up for some more BlazBlue? If so, which handheld do you want t it on?

BlazBlue: Continuum Shift II contains the complete set of single
player features from the console version, such as Arcade, Story
Attack, Training, and Story mode, and also has an ad-hoc Network mode
for multiplayer play. This impressive list of features is topped off
with new content created solely for the handheld version, including
extra story material and brand new modes such as Legion 1.5 and Abyss
Mode.

*Upgrade your character to reach the bottom in the new Abyss Mode,
create an army to conquer your foes in the new Legion 1.5 Mode, polish
your skills in the revamped Challenge Mode, and earn Platinum Dollars
to unlock a host of in-game rewards.

*BlazBlue: Continuum Shift II contains not only the full story of
the original, but also brand new Story Mode and Arcade Mode segments
for players to enjoy.

*Ad-hoc multiplayer allows up to 4 players to participate in a single
session. Two players will square off while the others are spectators.

*The Nintendo 3DS™ version of the game allows players to experience
the next dimension of /BlazBlue/ visuals with full 3D effects in
nearly all modes of gameplay.

Founded in 2006 in Torrance, California, Aksys Games Localization,
Inc. is a localization studio and visionary video game publisher
specializing in the Japanese-to-English translation of games and
committed to publishing unique, multicultural, high-quality
interactive content for all current-generation platforms. The company
is known for releasing acclaimed titles such as /9 Hours, 9 Persons, 9
Doors/ and the /BIT.TRIP/, /Guilty Gear/, /BlazBlue/ and /Hooked: Real
Motion Fishing/ series. More information about Aksys Games and its
products can be found on the company’s website, www.aksysgames.com