Easily one of the most-anticipated games of 2023 is Marvel’s Spider-Man 2. As the follow-up to the highly successful Spider-Man and Spider-Man: Miles Morales, the PlayStation 5 exclusive Spider-Man 2 will introduce Venom to the series and there is still some speculation the game will include some form of co-op, even though Insomniac Games has denied this. Whichever way it goes, you can be sure that the game will be at the top of many Game of the Year lists come next December.

As I shiver in anticipation for that game, I’m often tempted to boot up some of the older Spider-Man games I have scattered around the various game devices I’ve collected over the years. Peter Parker has shown up in a wide array of games, starting back in the 1980s with Spider-Man for the Atari 2600. He’s just the ideal comic book hero to recreate in video games, and over the decades, Parker’s found himself in some of the best games ever. 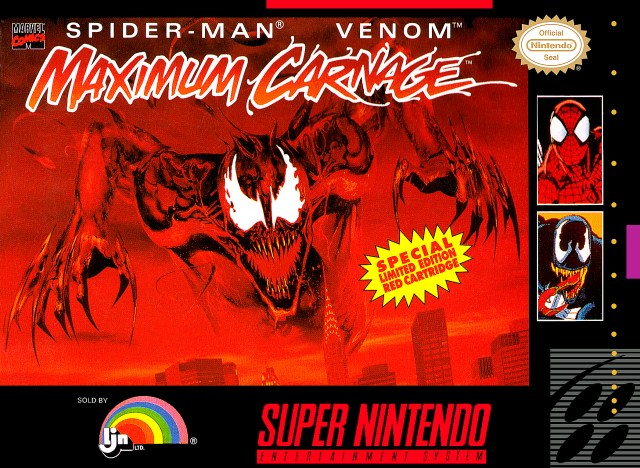 So here’s the thing with a lot of Spider-Man games: plenty of them are mediocre. Marvel didn’t always care about putting out quality products with its top comic stars and there is no better proof than the fact two of the first licensors of the character were LJN and Acclaim. Both companies were pretty notorious for their terrible games, but shockingly, a decent game managed to find its way to store shelves in the form of Spider-Man and Venom: Maximum Carnage.

Beat’em ups were a dime a dozen in the ’90s and Spider-Man starred in his fair share of stinkers on the SNES and Genesis. Maximum Carnage might be the lone exception. As an adaptation of the wildly successful “Maximum Carnage” comic book storyline, the game gave players the ability to choose between playing as Spider-Man or Venom as they attempted to stop Carnage and his minions. Maximum Carnage featured cutscenes pulled straight from the pages of the comic and a solid red cartridge if you were lucky enough to get a first-run print. Initially dismissed as yet “another” Spider-Man beat ’em up, time has been kind to Maximum Carnage and it’s now considered one of the better Spider-Man games of the era, along with the arcade-exclusive Spider-Man: The Video Game.

Based on the best of the Tobey Maguire-era films, Spider-Man 2 was the first game to take Peter Parker and put him in an open world. No more levels, just one big New York City to swing around as you stop petty crimes and the familiar faces of Spidey’s rogue’s gallery. And the swinging, oh man, the swinging. While many parts of it are dated now, it still stands as a benchmark for the industry and the game that would define the character going forward.

I was very tempted to put Spider-Man: Shattered Dimensions in the #3 spot until I re-read Nick Chester’s review of it and was reminded just how repetitive the game was (though I liked the stealth sections). With that off the list, there was only one obvious choice: Ultimate Spider-Man. Arguably the best Spider-Man game of the Activision years, Ultimate Spider-Man was released just a year after Spider-Man 2 and brought a smartly chosen cell-shaded art style to the streets of New York City. Like with Maximum Carnage, one of the big selling points for this game was the ability to play as Spidey or Venom. Unlike Maximum Carnage, both Spider-Man and Venom had their own storylines and vastly different playstyles.

Like with Spider-Man 2, some of the gameplay of Ultimate Spider-Man has not aged that well, but with a well-written story and fun voice acting, it’s the one Spidey game released by Activision that I’d love to see remade today. I mean, just imagine what a cell-shaded NYC would look like on the PS5 or Xbox Series X.

Of course Marvel’s Spider-Man: Miles Morales is in the second spot on this list. Some could argue it might be better suited for the top spot. With improved swinging mechanics, an endlessly likable protagonist, and a stunning snowy cityscape, Miles Morales was one of the best launch titles for the PlayStation 5. As a half-step between Marvel’s Spider-Man and the upcoming sequel, Miles Morales fleshed out Miles’ character and backstory following his introduction in the PlayStation 4 original. While his solo adventure was short and the Tinkerer wasn’t exactly the most compelling of villains, Miles Morales’ true strength is in the way it depicted his community of Spanish Harlem and the people who live there. Also, Spider-Man cat backpack. Can’t beat that.

I remember the first time I played Marvel’s Spider-Man. It was at E3 just months before the game was set to release. I stood in line for nearly an hour to play for just 20 minutes. And at the end of that 20 minutes, I wasn’t too impressed. It didn’t click with me. Something about it felt off. Turns out, 20 minutes just wasn’t enough time. I needed the whole game, all at once. When I did finally get my hands on the full game, I didn’t put it down for days.

Marvel’s Spider-Man is nothing less than the culmination of every Spider-Man game that came before it. That open-world vision of New York that was first explored in Spider-Man 2 came to fruition with Insomniac Games’ painstakingly accurate recreation of the Big Apple, and the swinging mechanics that define the character were refined and reimagined to make Spidey more agile than he had ever been before. It may have borrowed heavily from the combat of Batman: Arkham Asylum, but who cares about a little cribbing when the gameplay is this stinking good? Not only is Marvel’s Spider-Man a joy to play, but it features arguably the best storyline of any Spider-Man video game with top-notch voice acting that brings it all to life.