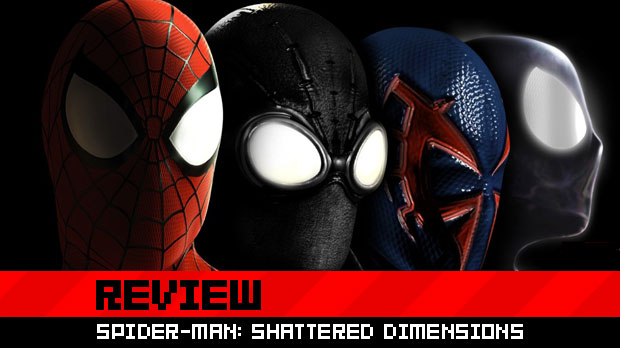 The title of Beenox’s latest — Spider-Man: Shattered Dimensions — is a bit of a misnomer, as it’s not dimensions that are shattered, but a mystical tablet. Adding to the chaos, the pieces are scattered across various dimensions. This prompts Madame Web to task various Spider-Men to obtain the shards before Mysterio, the game’s Big Bad, has the chance.

It’s the perfect set up for what makes Shattered Dimensions so unique, giving the player control of one hero in four different “styles,” allowing for the developer to offer up more web-slinging variety than any Spider-Man game before it. Or so you’d think.

Beenox does an amazing job of creating four distinct dimensions for the game’s four playable Spider-Men — Amazing, Ultimate, the Noir, and the futuristic 2099. Each has its own unique look, giving you a completely fresh take on old Web Head in each world. Amazing and Ultimate are similar, with their hand-drawn comic book look, hard lines, and bright colors, yet each has its distinct visual touches that set them apart. 2099, which takes place far in the future (hence the 2099), depicts a New York City that’s been overtaken by technology, with bafflingly large skyscrapers and flying cars. The Noir world may be the most striking, with its monochrome palette and heavy use of shadow and light.

The Spider-Men each have their own gameplay gimmicks to set them apart from one another, as well. Noir plays to the game’s use of dark and light, creating a more stealth-based experience that will have you sneaking up on thugs and quietly ensnaring them in your webs. 2099 can enable a sort of “bullet time,” and Beenox uses the city’s immense skyscrapers and verticality as an opportunity for fast-paced diving and chase sequences. Amazing and Ultimate, like their looks, are similar with one caveat — Ultimate’s symbiote costume allows him to enter a “rage” mode, sprouting black tentacles and such for crazy damage and combos.

To its credit, Beenox managed to not only make all of the game’s dimensions feel a bit different, but they all play reasonably well. Combat-wise, Amazing, Ultimate, and 2099 are all straight up button-mashing combo fighting, liked you’d expect from a Spider-Man game. Yes, there are combos which can be unlocked as you progress, and each character will get more and more powerful as you near the game’s conclusion. Make no mistake, you’re going to be spending most of the time mashing buttons in a variety of combinations to take out groups of thugs. It’s about as satisfying as you can expect, with Amazing pulling off some cool and flashy web maneuvers such as creating giant web hammers to smash foes. It’s a solid — if a bit repetitive — brawler, and Spidey fans should have fun making their hero of choice beat on enemies.

Now it should be said right now that I am not a fan of stealth-based games. I don’t like sneaking around in shadows, and I’m mostly too impatient to stand around waiting for a guard to turn his back on me. So it’s not surprising that despite the fact that I found the Noir levels to be absolutely gorgeous, I didn’t enjoy playing them very much. Taking a page from Batman: Arkham Asylum, the stealth is mostly forgiving and mostly mandatory. With two guards standing right next to each other, it’s possible to capture one in your webs without the other noticing. If you do manage to gain their attention, you have two choices — stay and fight, or zip off and hide … just like Arkham Asylum. And also like Rocksteady’s Dark Knight game, while it’s possible to engage enemies with firearms, the hero is so weak against them that going head-to-head will likely end in death.

While the first two Noir levels are mostly cakewalks (with moronic guards that will ignore the fact that a buddy who was right next to them has gone missing), the final level in the dimension takes an obnoxious twist. Out of nowhere, enemies have uncanny perception, which will throw you for a loop if you’re not ready for it. I spent far too much time on this particular level as I tried to adjust to new game rules, totally unprepared for what I was being asked to do. You’d think the Noir levels would be a nice change of pace compared to the other, more frantic combat-driven dimensions. But I simply found them to tedious, bringing the action to a crawl, my instinct as Spider-Man to hop into battle and kick some ass completely stifled.

Shattered Dimensions biggest problem, however, isn’t in the individual bits of gameplay. Instead, it’s that after a few missions, you quickly come to find that they’re all the same. It’s not that the levels and environments don’t feel unique, because they do. Each mission will have you battling a new villain, chasing them down collect a piece of shattered tablet in a variety of brand new environments. It’s simply that the blueprint for each and every level is essentially identical, and by the time you hit the game’s halfway mark, this becomes all too obvious.

Each mission is basically one long boss battle, with almost all set up as follows (in different orders, depending on the level):

Not kidding, without exception, each and every level is some variation of the above actions. It’s as if, instead of designing various missions, Beenox designed one and had its artists and level designers put twelve different skins on it. The upside here is that each level is damned cool, most notably the Deadpool “game show” level and a beautiful Noir carnival level. The problem is that the game’s mission patterns are so obvious and noticeable that chasing after the tablet becomes extremely repetitive a few hours in. The sense of deja vu from mission to mission is overwhelming, much to the detriment of the overall experience.

Shattered Dimensions does have some cool first-person sequences, which are weaved into the game’s cinematics as well as the gameplay in the form of a “Punch-Out!!-style” mini-game. I put “Punch-Out!!-style” in quotes because these first-person fights aren’t direct rip-offs of Nintendo’s classic title. Instead, Beenox has players using the analog sticks to throw punches, all of which land every single time — there are no patterns here. You just mash on the analog sticks, pounding your little Spidey-fists into stinky villain’s face. Dodging is the same too — the boss character attacks and you pull down on both analog sticks to dodge, the game prompting you to do so each and every time.

It’s disappointing that Beenox couldn’t add a bit more to these sections, switching things up with interesting patterns like Punch-Out!!’s pugilists. Instead, every time you’re faced with the sequences you’ll likely find yourself groaning that you have to do it again. Smashing in the bad guy’s face is supposed to be fun, right? What happened?

Comic scribe Dan Slott does write a decent story, with some solid and sometimes hilarious Spider-Man/villain banter. It’s exactly what fans will want and expect from the game, and Shattered Dimensions delivers big on the fan service, with nods to various story threads, Marvel characters, and history throughout. The voice work is mostly spot on, too, with the developer casting actors known for their Spidey work — Neil Patrick Harris, Christopher Daniel Barnes, Dan Gilvezan and Josh Keaton are all accounted for in Shattered Dimensions. Marvel’s own Stan Lee even lends his golden throat for the game’s narration.

With all of these great folks on board, though, you have to wonder why more dialogue wasn’t recorded and written. To say that what you’ll hear during playing the game gets repetitive is an understatement. It’s not uncommon to hear the same Spider-quip twice in a row, and things get even worse during boss battles, when during a 10-minute battle you’ll be subjected to the same five lines of dialogue over and over and over again. This is particularly frustrating when Madame Web decides to give you the same piece of advice on how to topple a villain repeatedly, even after you have proven you’re already on the right track. “Irritating” is a nice way of putting it; getting the urge to toss a controller at a surround sound system just to shut Sandman up is another.

From a graphical standpoint, Shattered Dimension completely and totally nails it across the board. The game is absolutely breathtaking, with Beenox totally pulling off four distinct worlds, each looking better than the next. This is easily the best-looking Spider-Man game to date, with any given screen pulled from it looking like a panel from a graphic novel. The work done on some of the Noir Spidey levels has to be singled out. There’s one instance where Spider-Man sits perched above the entrance sign to a carnival, the lights of the rides and the blasts of shimmering fireworks off the distance creating a jaw-dropping visual effect.

Spider-Man fans are going to love Shattered Dimensions, if only to get their hands on four familiar web crawlers. There’s so much amazing fan service here, that enthusiasts simply shouldn’t miss it. Despite its extremely obvious and repetitive nature, it’s also a decent amount of fun, provided you play it in small doses. Maybe you’ll forget that the last mission was nearly identical if you wait a few days. It’s just a shame that, despite Shattered Dimensions seemingly being the perfect set up for variety, it falls short on its promise.