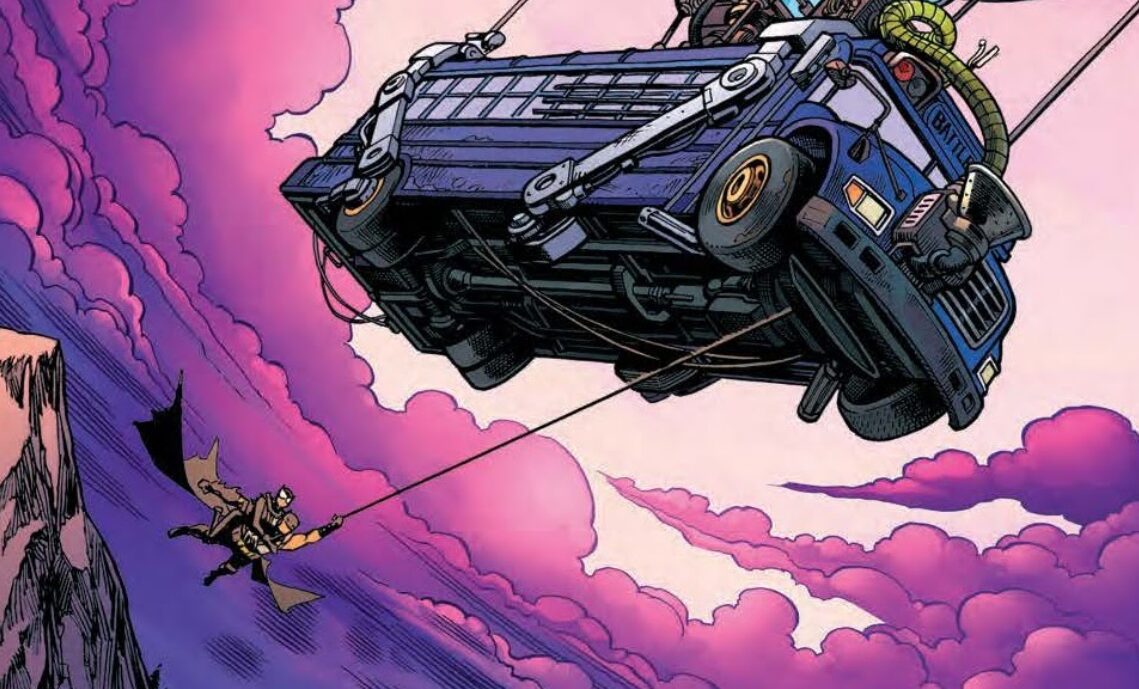 We talked to Christos Gage and Reilly Brown

The more I learned about the Batman Fortnite Zero Pointcomic crossover, the more I leaned into it. OK sure, bringing Batman into this world and having him investigate (detect, even!) how he got there makes sense. I mean, he’s been in weirder situations. But after talking with the creative team behind it, I realized there was a lot more thought that went into it than I initially anticipated. We got to speak with Christos Gage (writer for the series) and Reilly Brown (artist for the series) about some of the finer points of the Batman Fortnite crossover, and where it might lead.

For reference, the crossover spans six comic issues, is canon, and has a few cosmetic influences on the core game (as well as a promotion that grants comic readers bonus items). The series concludes today with issue six, but it’s actually been running for two seasons: the previous Primal season and the current aliens one. I thought it would have made a perfect in-game season long storyline, but Gage was able to tell me point blank why it didn’t shake out like that.

He explains: “Fairly early on in the process, COVID came along. We didn’t know what that would do with the schedule with the comic. Early on it was clear we weren’t going to do that this time around. I do know that what is happening in the comic is canon for the game story, and Donald [Mustard] can tell you exactly what’s going on and when it happened. The real question is how does that stick with Donald’s mandate that the agency of [Fortnite] is with the player. So take The Spire. It’s in the game and people can mess with it if they want. So I think it could work, and it could be shorter, but who knows, I’d like to try it.”

Gage further clarifies that “Donald’s mandate” involves Donald Mustard (Chief Creative Officer at Epic Games and the person who is responsible for coming up with this crossover) and his desire to make Fortnite a truly open ended game. So how did all of the details come together? He told us: “When we were first approached it was already Batman Fortnite. There was a suggestion of Deathstroke, and Catwoman. I think that as far as Fortnite goes, it was more along the lines of ‘we can use anyone we want.’ So Donald Mustard…basically came up with the basic story for all this and was deeply involved in the whole process. He said ‘he has some idea of what these characters are,’ and said ‘go nuts, and if something is too far off field I’ll tell you.’ Like Magnus. He’s a gigantic Viking with an axe, who deals with problems by hacking them up, but he’s an honorable guy. He looks cool and also plays off against Batman well with his approach and style. It was that sort of process. For fighting scenes, I would always tell Reilly ‘pick who you think looks cool here.’ I’d say it was a group effort in pretty much all aspects.”

Reilly chimes in and notes that they “tried to put in a wide variety of characters from the whole Fortnite universe,” and could basically run carte blanche with some of the wordless action scenes. The beauty of this creative license?” The characters in Fortnite aren’t that much different than the goofy characters Batman sometimes fights,” Reilly says.

But I also wanted to drill down into how much the team was restricted on the DC side of things, and if they had any mandates as to how heroic (ha) Batman should be. Gage fielded that one, noting: “There was a little bit of…since we’re in Fortnite, if you kill someone they respawn. We asked ‘should Batman be killing people?’ And the answer, this was decided early on, was no, because that’s now who he is. But he’s definitely been knocking people out of the fight. One of the characters kills a guard, and Batman objects to it…even though he’s lost his memory, he’s still Batman. No one ever said ‘we’d like to have Batman pick up a machine gun.'”

While Batman Fortnite might be over, Gage and Reilly might not be. While details were very slim, the duo was asked about the Daily Planet tease at the very end of the comic. Is there a Superman story coming? While they were mum, it sure seems so. Given that Superman is slated to enter Fortnite in 37 days, it could be close.