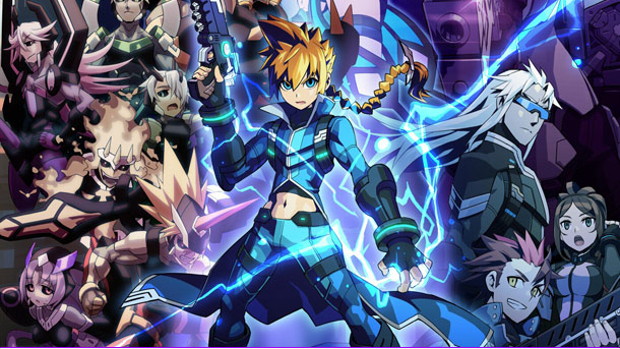 Keiji Inafune’s other not Mega Man game is Azure Striker: Gunvolt. Its main character, Gunvolt, was viciously censored for the planned Western release, as you can see below. And by viciously censored I mean his designed was changed, per Inti Creates CEO Takuya Aizu, to “appeal to boys between the ages of 10 and 14—who we assume will be the game’s main purchasers—in North America.”

You hear that, you nerds? You’re playing a children’s videogame! Anyway, Gunvolt’s midriff was covered and his braided ponytail removed after not testing well, but now the ponytail is back. But not the midriff. Operation Midriff, anyone?

The Azure Striker Twitter account explained, “Inafune-san concluded that Gunvolt keeps “braided hair” in US version too. Because he emphasises the design. As for the “bare midriff”, leave the Gunvolt’s separate clothes design as it is, we decided to make him wear the black skin tights.”

Braided ponytails have annoyed me since Gundam Wing, but apparently people (still) think they’re a good look. Even when I was dumb enough to think a Gundam with a scythe and bat wings was cool, I knew its pilot looked like a goof. Who here is for the ponytail? For the bare midriff?

Why Inti Creates Changed Gunvolt’s Design For The West [Siliconera]