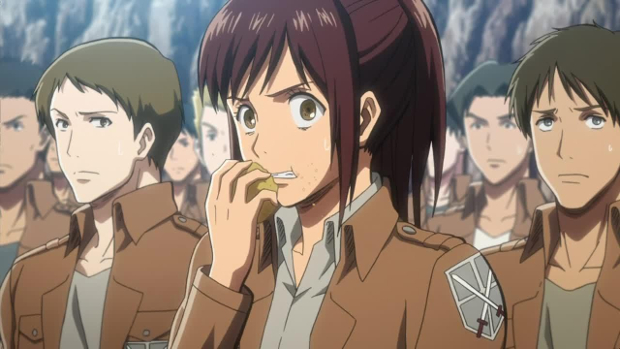 The anime that’s sweeping people I know (most of them through the internet) by storm is also getting a 3DS game courtesy of Spike Chunsoft. Given its wild popularity, a game based on the anime wherein teens fight Titans was inevitable. It will be interesting to see what a team most widely praised for its visual novel puzzlers (999 and Virtue’s Last Reward) will do with a full 3D action title.

In it, you’ll play as the series’ leads. You’ll start with Eren before unlocking the option to select Mikasa and Armin. Famitsu also hints Levi and others might be playable as well. No Sasha Braus, no buy, I say.

Single-player missions will burden you with AI companions who might get nabbed by the raging red giants, but you can save them from becoming dinner by lopping off the Titan’s arm before they make a meal of your pals. Meanwhile, the game also features four-player cooperative multiplayer that allows you to make and train your own character. I guess they need all the help they can get.

The Attack on Titan 3DS game drops in Japan on December 5. Does the anime have a big enough fan base to anticipate localization? Anyone planning an attack on their wallet and importing it?