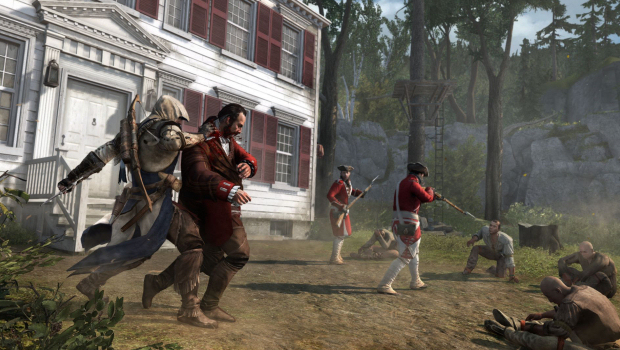 The patch culture of mainstream gaming continues, with Assassin’s Creed III being the latest to release a huge launch-day patch, containing 44 fixes. This follows on from last week’s Medal of Honor: Warfighter, which also required a huge patch.

Ubisoft says the patch comes “Highly recommended.” Looking at the list below, you’ll definitely want to toss it in, since it seems to make some drastic improvements to a few potential game-wreckers. It looks like another game that was rushed to get out ahead of the competition in November. As is becoming the way.

Check out the full list below, but beware there are spoilers. Oh, and Conrad Zimmerman will have a review for you very soon.

– Animus Synching tutorial, fixed an issue where the player could think he’s stuck in an infinite loading when getting to Boston after the end credits
– Fixed a bug where counter-killing with the bow does not always work
– NPCs spawned too far away could end up being of the wrong type
– Camera could remain stuck after the player being respawned
– Player could remain stuck after diving from a waterfall
– Player could remain stuck if he exits a slopped hay stack at a certain angle
– player would always get immediately detected when performing an unarmed stealth assassination in another guard’s back
– Under rare circumstances, the crowd would stop spawning
– Fixed an animation glitch when interrupting the reception from high profile jump
– Fixed various occurrences of missing sounds
– In some cases, the Animus Database sound ambiance was not stopped when exiting
– Various stats and leaderboards were not showing up properly
– Online shop could sometimes appear empty if fetching the data from Xbox Live is taking too long

– Brawler Challenges 3 – Task “Own every weapon available in the stores” would not complete when the player expects it to.
– Fort Monmouth and Fort Division – Quest objectives would fail too early without the fort resetting properly
– New York delivery mission – Game asked for a different item (deer heart) than what was showed to the player (venison)
– New York Liberation Missions – Possible that the game would wrongly display that 2 of the districts were completely liberated when it’s not the case yet

– Mission “HAPPY EXPECTATIONS” – Game could remain stuck on a white screen when starting the mission
– On the Homestead, fixed a bug where the player could remain stuck if he performs a corner pose on the left side of Norris’ cave’s entrance