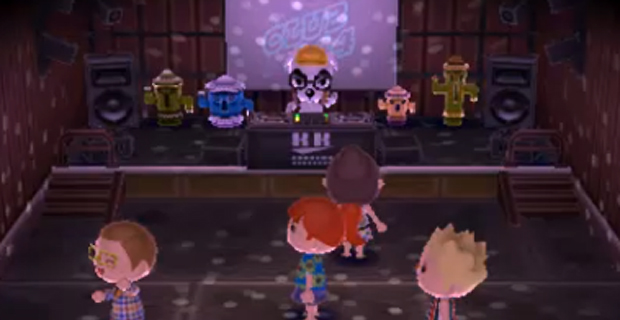 Nintendo held a live stream presentation for Tobidase Dobatsu no Mori (roughly translated as Animal Crossing: Jump Out) yesterday, and the sheer amount of hot Animal Crossing facts that blasted our faces were unprecedented. Anyone who’s followed the Animal Crossing series from the start knows that the series is all about minutia, and that includes the amount of changes that are made from game to game. This new title for the 3DS continues that trend, though there a few new editions that seem like quantum leaps into the future, at least by Animal Crossing standards.

As a diehard fan of the series, my jaw dropped when I saw the return of the tropical island, that K.K. Slider had become a part-time D.J., that you could swim down to the ocean floor, and that you can now enter a massage-induced dream world. It almost felt like too much, until I saw that the dream world in Animal Crossing looks exactly like the regular world in Animal Crossing. I wouldn’t want it any other way.

The new stuff don’t stop there. Hit the jump for a full rundown of the newly announced features, along with videos from our homeboy Nintendaan.

– Tom Nook can help you make design changes to your house
– Capture and sell your own critters
– Dr. Shrunk returns at the club
– You can now have many more emotions, all of them will be saved
– Design and sell your own items, which can eventually change during the process
– Much larger selection of colors this time around when designing

– Early morning music is calm, dawn the music is more upbeat, afternoon is more pleasant-sounding music, nighttime the music has more base, late night music gets mysterious
– KK Slider takes on the role of a DJ at the club, as well as his regular guitar gig, tons of new songs of both styles

– Shake your ass at the club all night long