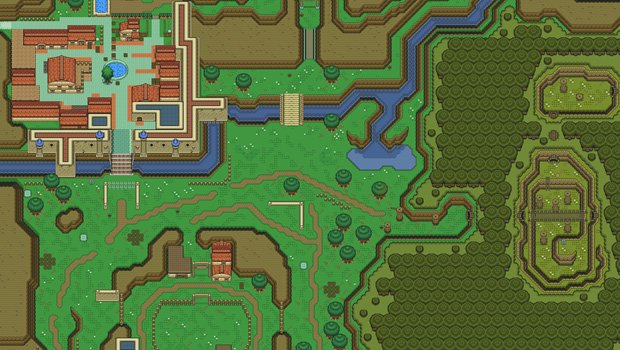 Does anybody else remember the Zelda fan game from some years back that was to be a 2D, top-down remake of Ocarina of Time? If you do, you’ll probably also remember how the creator went so far as to fake his own death just to avoid dealing with the hassle of people bugging him to finish. Ironically, his stupid stunt caused way more drama than a simple “I give up, guys” would have. I doubt he even made much headway into the project to begin with.

Regardless of that particular black mark in fan game history, the idea of an Ocarina of Time revamp using A Link to the Past graphics is quite tantalizing. The marriage of the N64 classic’s mesmerizing world and the SNES classic’s visual splendor — who would refuse such a union? Zelda Fan Game Central member MaJoRa wanted to make that dream a little more attainable, so he spent the past two years painstakingly recreating the OoT overworld using SNES graphics. The results, to say the least, are incredible.

You’ll find Lon Lon Ranch, Gerudo Fortress, the Lost Woods, the Hyrule Castle gardens, and every other non-dungeon locale. You’ll even find the fishing pond! MaJoRa says there are still touch-ups that need to be done, but the map is more or less complete. At the ZFGC link, he has split up the map into various regions, though those links are currently broken. Fortunately, he uploaded the complete map over here.