I’m of the mind that Mario Kart DS is the best in the series, one of the best games on the DS and a shining example of well executed gameplay. Accordingly, Mario Kart 7 seems like it could be a game ready to stand out from the pack and help justify the purchase of a 3DS for the good amount of people still wanting for things to play on the system.

I was excited to play Mario Kart 7, which I’m still tempted to call Mario Kart 3DS, but won’t, because of weird naming conventions that have branded it otherwise. What I found is that Mario Kart 7 is Mario Kart, plus a bit more, which is a good thing. 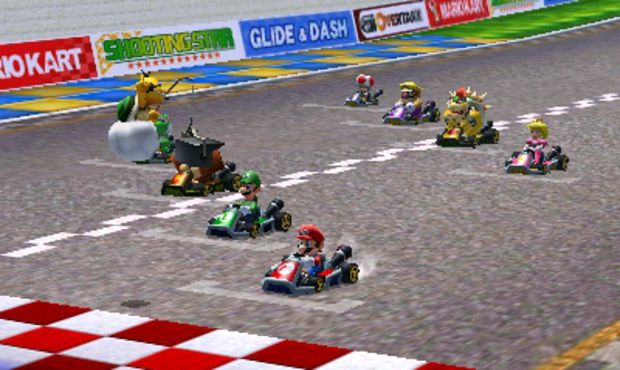 If you’ve played a Mario Kart game in the past, particularly Mario Kart DS, you’ll be right at home with Mario Kart 7. At the onset, I instinctively darted over to Yoshi, Dry Bones being absent, and proceeded to the kart select screen. The kart select screen prompts you to mix and match a kart body, wheels, and a gliding apparatus, the latter of which automatically deploys during certain segments of the games (more on that later), and all of which have their own statistics, tailored to your personal driving style. As usual, there were a variety of options, plenty of which were hidden and locked away, waiting to be unlocked. The two new characters I can clue you in on are Metal Mario and Lakitu, though neither was playable during my time.

I was able to race through four cups, one at 50cc and 100cc, two at 150cc, over local play (four people, four computer controlled) and everything I remember from years of playing Mario Kart rushed back to me. I was a bit hesitant, at first, about having to use the 3DS’s circle pad, but it proved a commendable steering wheel proxy, though building up boosts with it while drifting felt a bit unfamiliar. Also, I’m still pretty good at Mario Kart. 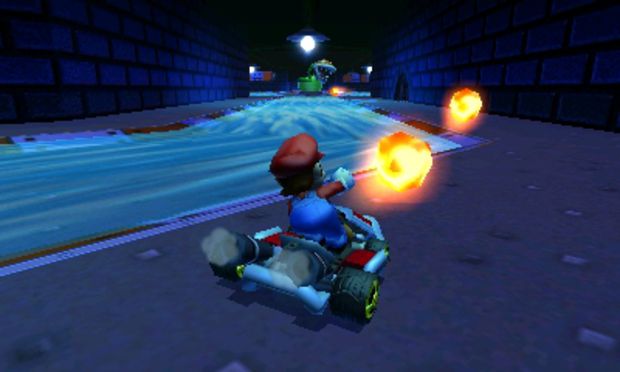 There are eight Grand Prix cups, two of which were locked during my hands-on time, boasting a wide variety of Mario Kart levels past and present. Unfortunately, I have yet to see Moo Moo Farm, so I’ve got my fingers crossed that it makes it in there. Those cows are just too cute.

One new, big feature in Mario Kart 7 is the first-person camera mode, akin to the “cockpit modes” of conventional racing games, though the wheel moves as if possessed, as there are no hands on it in this view. You can shift into and out of first-person mode on the fly with a push up or down on the directional pad, respectively. I only played in first-person a bit, but it was an interesting perspective. You can elect to steer with either the 3DS gyroscope or continue using the circle pad, though there is no way to disable gyroscope controls should you end up fancying this mode and want to use it with the circle pad without the fear of mistakenly drifting off the road (unless you’re super good at holding still). The gyroscope controls seemed to handle better than I vaguely remember the Wii version of the game handling before I switched immediately to the GameCube controller, but it was hard enough for me to get my head around this new perspective, so I tended to default back to the circle pad when I played in first-person.

While the cockpit mode in Mario Kart 7 is an entirely optional affair, there have been a few subtle, but noticeable changes to the core gameplay as well. Jumping (right shoulder button) when going off ramps causes your racer to do a boastful little trick, which gives you a slight boost when you touchdown again. A few tracks also submerge you in water, which now leads to a propeller appearing at the back of your kart, so you maintain normal speed. The Tanooki tail also makes its way into the Mario Kart arsenal and it’s as adorable as I mentioned it was in my Super Mario 3D Land preview. It even spins as your propeller when you’re underwater! 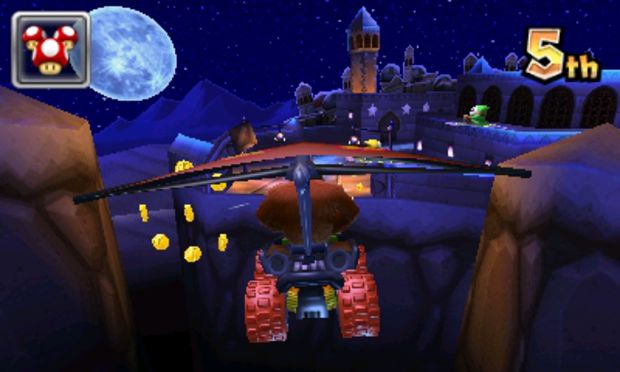 As mentioned prior, karts also deploy gliding mechanisms when sent airborne for a prolonged period of time, which I found fun. A few levels even seemed to have shortcuts only reachable by careful gliding. Blue shells also come careening after the first place racer on the ground now, making them liable to wreck the day of more than just their ultimate target. Coins are also back, instantly reminding me of the hours I sunk in Mario Kart Super Circuit collecting every coin in each level, though Mario Kart 7 limits you to a maximum of ten coins, which again serve the gameplay purpose of increasing your top speed. I’m sure the novelty will wear off on some of these changes quickly, but they’re welcomed additions to the core gameplay that worked well with the experience.

Though I was playing Mario Kart in what is arguably the best way to play, locally, I also have the details on some of the online multiplayer components. Sticking to the local front for a moment, single-card play is once again supported, meaning only one person among friends has to own the game for everyone to be able to race against each other, though leeches are restricted to racing with Shy Guy in a default kart. Both modes support two to eight players.

One of the coolest online features is the ability to make and join custom communities, which, as I understand it, act analogous to PC gamers playing on specific servers. Communities, once created, are assigned a numerical code, which others can use to find and join them and, when searching for an online game, you can filter by communities you’re a part of, as well as similarly ranked opponents or friends. As far as I know, there isn’t a limit to the number of communities you can be a part of, though your “racer card” only keeps track of a finite amount. The racer card keeps track of your record and similar, interesting statistical minutiae and can be distributed through the 3DS’s street pass feature. Ghost racing data can be distributed and collected in a similar way. 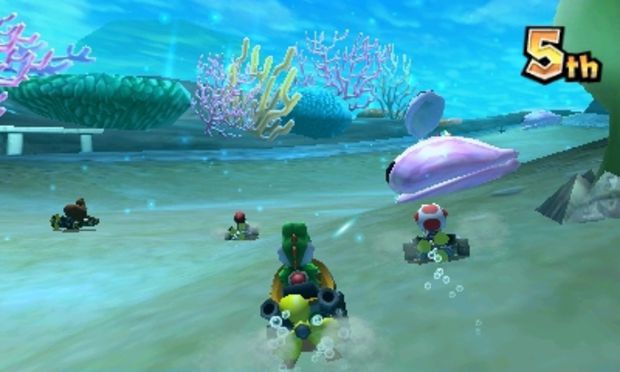 I played with the 3D cranked all the way up for the majority of the time and, while I suppose it looks nice, I was much more impressed by just seeing the game’s deliciously vibrant color palette on the 3DS’s higher resolution screen. Perhaps I’m still not accustom to playing the 3DS, but I found myself frequently having to readjust my eyes or the screen position when I drifted, unconsciously, out of position and had to deal with briefly distorted screen ghosting — and this was with my arms stabilized on a table. Still, visually, the game is a treat to look at.

Mario Kart 7 is Mario Kart, which is fantastic. There is still little more infuriating than getting rocked by a blue shell on the final lap, and little more rewarding than coming back and finishing that lap in first. Time will tell if it can equal the pure elegance of Mario Kart DS, but it’s looking like it can reignite Mario Kart fever and prove to be a well-crafted, addicting experience worthy of the Mario Kart name.