It’s been awhile since we’ve seen the Rainbow Six series but it’s finally coming back in a big way in 2013 with Rainbow 6: Patriots. The next installment is looking to do two very big things; Patriots is trying to present a story that is echoing the current real world climate, and it wants to take back the “crown of number one online shooter.”

It’s all a very tall order, even for a franchise as recognized as Rainbow Six. It’s too early to tell just how Ubisoft will stack up in the multiplayer realm, but single-player is looking quite enticing.

Ubisoft gave us a live demo of Rainbow 6: Patriots on the PlayStation 3 by playing through the level we’ve seen in the target video (above) released a little while ago. The game was running on the Assassin’s Creed engine and, to me at least, was looking a lot better than the target video (note that Ubisoft only provided concept art.)

A difference in the live demo is that the player actually takes control of the helpless man who has the misfortune of having a bomb strapped to him. As the van is getting attacked, you’re told to hold down the detonator by literally holding down the R2 button the whole time you follow your captor from cover-to-cover on the bridge. Once at a certain point, the game then transfers controls over to James Wolfe, leader of the Rainbow 6 squad. About 80% of the game will be played from Wolfe’s perspective, while the other 20% will have you in the shoes of civilians, first responders and even terrorists themselves in order to provide you with a human perspective from all angles.

Once in Wolfe’s shoes, you and your team will be sniping away from atop of the bridge at targets until you’ve cleared the immediate area. Next, you and your two partners will then rappel down the bridge towards the ground. The rappel system has been largely overhauled from the Vegas series and it was impressive seeing how fluid the action is while you’re engaging targets vertically.

Once on the ground, you’ll be engaging more terrorists going cover-to-cover with your team. It’s a pretty gritty scene on the bridge, as there are a lot of civilians fleeing the area still. There were a couple of tense points where you see a cop get executed by the terrorists and a person stuck in her car take a stray bullet to the head. 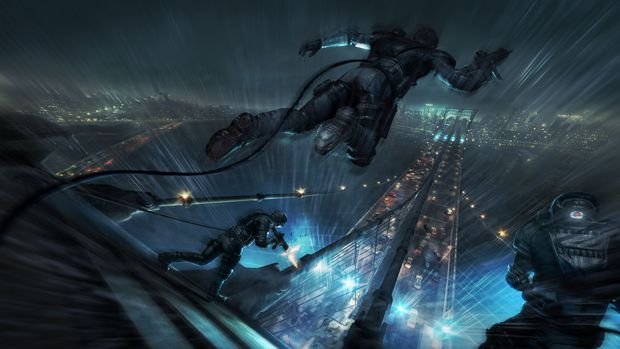 Team Rainbow finally gets to the poor guy strapped with the bomb and there’s only 60 seconds left before the thing goes off. One of your teammates thinks they can defuse the bomb, but Wolfe doesn’t want to risk it and thus throws the guy off the bridge, saving the lives of everyone on the bridge at the sacrifice of one.

Wolfe echos Jack Bauer from the show 24 in a lot of ways as he will do anything he has to in order to stop The True Patriots, the terrorist organization you’ll be facing off against throughout the campaign. The True Patriots aren’t foreigners following misguided religious influences as you typically come to expect in these types of scenarios. This group is made up of everyday people and former military servicemen  upset at the way the government has treated them. Leading the True Patriots is Jonah Treadway and his end goal is to do whatever he can to overthrow the government, even if it means sacrificing his own life for the cause.

Next, Ubisoft showed off a test level where your team had to breach a room in order to show off some more of the combat. Initially, I was a little scared that Rainbow 6 was ditching the strategy and tactics aspect that the series was well known for. That’s far from the case as they’re seemingly going above and beyond with all the little things you can do. In fact, we saw over a dozen or so different takes at how your team could breach this one room.

There’s a lot of work being put into the AI so they will react accordingly to every situation. When it comes to your team, there will be a one button point and click option where your teammates will know what to do based on the surrounding situation. There will of course be an advanced radial menu for controls as well for those looking for something more deep and precise. Plus you can expect voice command controls, which will in all likelihood include Kinect functionality in terms of voice stuff. (Nothing was discussed as far as full motion controls.) 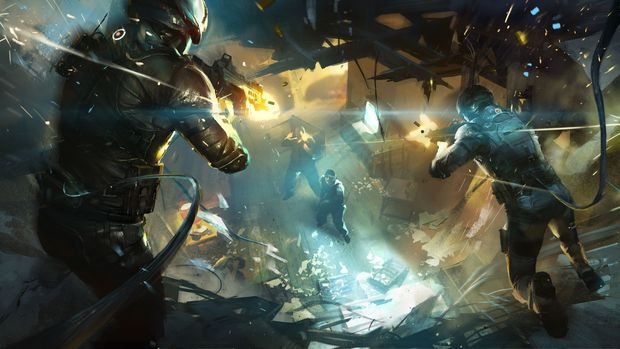 In place of the snake camera from the Vegas series is a new augmented reality perspective that will remind you of Detective Mode from the Batman series. Enemies are highlighted through walls allowing you to plan out how you’ll breach rooms. You can go in silent, go in hot, and mark what targets will get taken out first — it’s everything you would expect from past Rainbow games, just better thanks to a smarter AI system.

The same goes for the enemy AI. In one example, the main player shot at the door from outside. Normally you’d expect the bad guys to just start rushing out, right? Here, however, the enemies all took cover inside the building along with a few of the bad guys pointing their guns right at the door in wait. When the player sent his team in, they were instantly taken out as everyone was ready and expecting something to happen.

It should be noted too that the enemy AI will also react “realistically.” Since some of these guys never had any military training, you’ll see them mess up, such as seeing a character trip over himself as he tries to take cover.

On the multiplayer side, well, what’s a Rainbow 6 without multiplayer? In fact, Ubisoft is looking to recapture the crown of number one online shooter again. That’s a tall order and what I saw of the multiplayer didn’t exactly wow me. 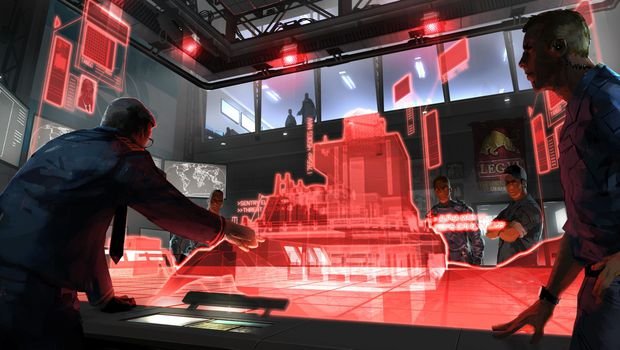 The big thing Ubi is pushing with multiplayer is that everyone will always be in a room as opposed to the standard multiplayer menus you see in games like Modern Warfare 3. You’ll first appear in the ready room which contains a 3D table (called Sandtable) of the map you’ll be playing on. The team leader and team can go through the level and plan out strategies by placing down waypoints and markers for the players to follow once in the real map. Once ready, players will jump into an airplane before finally getting into a match.

As for the actual match, it was only a two-versus-two game and Ubisoft wasn’t really talking all that much about everything that will be available. Visually, the map looked pretty good and I thought some of the features were interesting. Specifically, a little icon will flash on your HUD to indicated that an enemy currently has eyes on you.

I’ve never been much of a Rainbow Six multiplayer type guy as I’m more about the fast paced action you see in other FPS games. I’m sure this will please fans but unless you’re planning to jump online with your friends, it’s hard to be interested in anything that requires precise team tactics given how hard it is to depend on random people in team based games. Oh, and for those of you that asked me on Twitter, you’ll be happy to know that there’s a high probability you’ll see some sort of “Terrorist Hunt” mode.

Overall, the core Rainbow 6 feel is there and promises to be ramped up. It’s the story that’s going to be largely hit or miss, I feel. I’m all about it based on what I’ve seen so far as it’s a huge step in storytelling in videogames, and Ubisoft has a history of not shying away from controversy in their games’ narrative. The question is, do you really want to play Patriots when it hits so close to home?