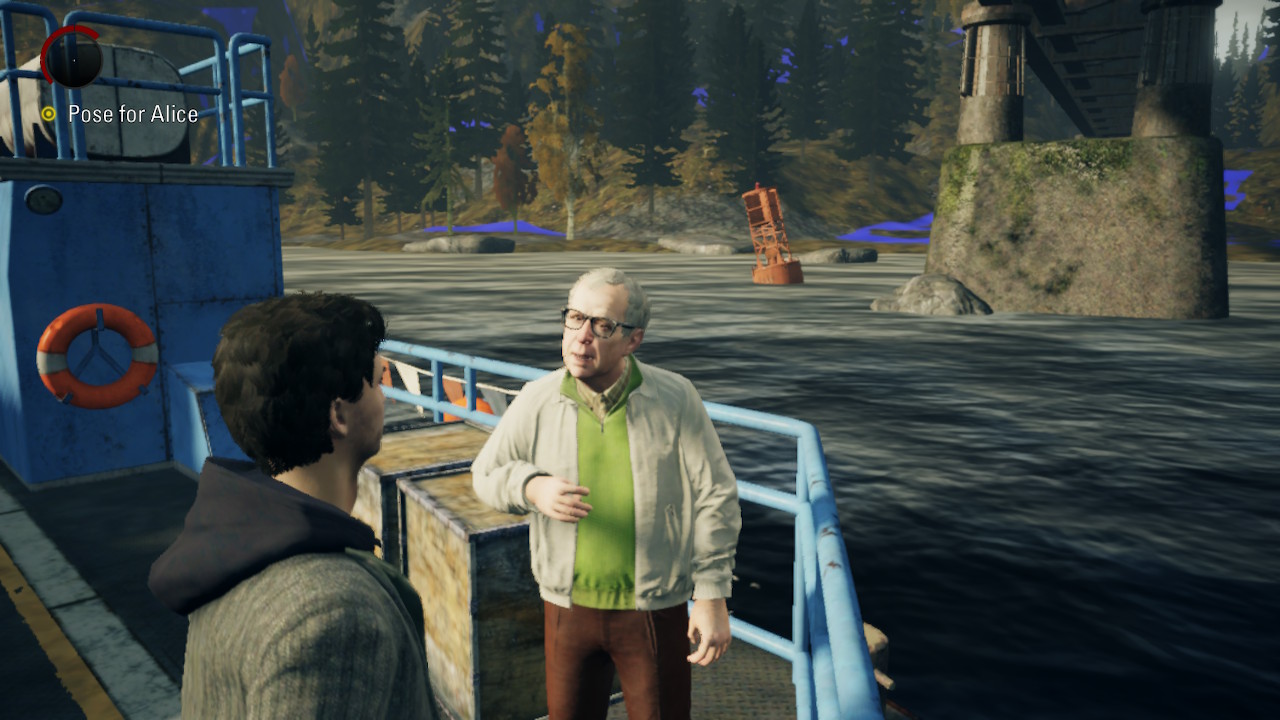 Alan Wake (now on the Switch) is psychological horror game about coming to terms with who you are. Many have compared it to Silent Hill 2 for that reason and many others, but for me, the ways that it’s about internal conflict have always felt more unintentional than that.

Throughout the game, the titular Mr. A. Wake is thrown into nightmare situations that are too bad to believe. Likewise, the game’s Switch port is technically much, much worse than anyone would have expected.  When it comes to stuff like polygon count, pop-up, frame rate, and just a general sense of jank, this is one of the least polished-looking modern games from a AAA studio I’ve ever seen. It runs worse than the original 360 version did in 2010. Heck, it even looks a little cruddier than Silent Hill: Shattered Memories and Resident Evil 4 did on the Wii back then.

And I sort of love it for that?

Alan Wake Remastered is a MESS on Nintendo Switch, and looks worse than the Xbox 360 version from a decade ago.https://t.co/MZ0LahmtmN pic.twitter.com/onyyjiOd9o

Maybe that’s because the internal conflict that’s always been key to Alan Wake for me isn’t about it’s tortured lead character. It’s about how the game truly doesn’t seem to know if it even wants to be a videogame or not. In my mind it’s always been sort of a sister game to Deadly Premonition, another cult classic survival horror game about fighting the same shadowy zombie-type things over and over again in a little American town. The big different between the two is Deadly Premonition always had a reputation for being so bad-its-good.

Alan Wake, on the other hand, looked technically amazing when it first came out, and so it got rave reviews. That polished look never matched how clunky and laugh-out-loud hammy its story was. Much like with the recent derided re-release of GTA: The Trilogy – Definitive Edition, this worse-looking version of Alan Wake is a much better fit for how I’ve always felt about it.

Why am I being so hard on Alan Wake you ask? Dear reader, you have to understand: The first words you hear after booting it up the are literally “Stephen King”, and it doesn’t let up from there. There are a few aspects of the game that seem more inspired by The Twilight Zone or Twin Peaks, but by and large, this is a game that desperately wishes it was either a movie, a book, or both by the world’s most popular horror author. It features more references to King’s work than I would ever want to count.

The premise itself is essentially a weird cover song of Misery, The Dark Half, with bits of other King novels like Christine peppered throughout. And that’s OK! The problem is the complete lack of subtlety. The copying of King is so loud and strong that it makes the game more like a parody of the author more than anything else. 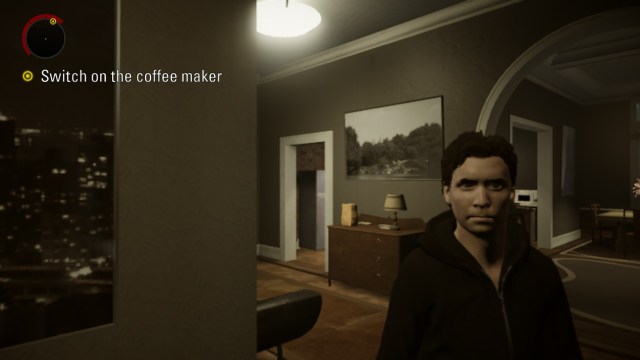 Spoilers: in the first couple of hours, the game features a cut scene that copies an iconic shot from Kubrick’s film adaptation of The Shining. Then, as if that weren’t enough to take you out of the game and make you think about a much better thing you could be watching than the game you are currently watching, the narrator then blurts out something like “this guy is like Jack Nicholson from The Shining!” This probably wasn’t supposed to be funny, but I still laughed out loud, and a big part of me hopes that was the intention.

Games that try this hard to be like movies are now like the 3rd or 4th most dominant genre in the industry, way behind stuff like Minecraft, Genshin Impact, and even Mario Kart. That wasn’t true when Alan Wake was first released though. Back in the 2010’s, games that tried hard to be movies won all the awards and made a bulk of the money. It was a scary time for people like me who saw the move to make games more like films as a self-loathing near-suicidal downgrade.

And even if I did like movies more than games, and therefore wanted to see games turn into movies, games are just always worse than movies at being movies! Alan Wake is definitely no exception. It feels much more like a Junior High School theater adaptation of a Stephen King movie than a big budget film. It’s cute and earnest, but if there was any reason to think it might someday replace the real deal, you’d probably want to see it put out to pasture. 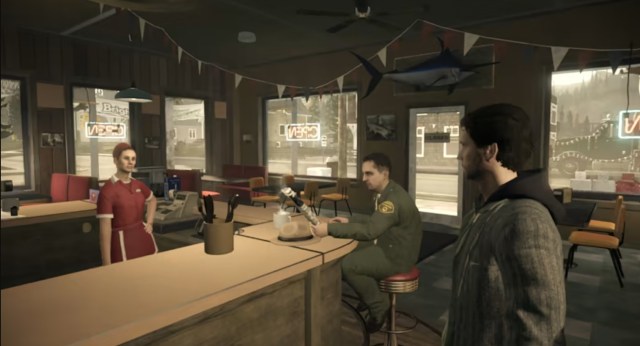 So not only does this technically worse port of the game serve to humble Alan Wake a bit, it also give the whole thing a little of that dingy, broken and unsafe feeling you might get from one of Puppet Combo’s Indie Horror titles. Underneath all the heavy-handed narration and obvious aspirations to be “more than a game”, Alan Wake is actually a pretty fun game, and having worse graphics doesn’t change that.

The main mechanic that makes it stand out is the need shine a light on most enemies before you can damage them. It’s dark as hell most of the time so you need the flashlight for more than just self defense. When the game finally quits shoving heavy-handed narration, in-game collectable book pages that actually spoil the story for you(!), and uncanny valley packed cinemas, it’s actually a really effective survival horror game, and the low-fi aesthetic doesn’t hurt that one bit.

There’re also a lot of little touches here that remind you that, in 2010, Alan Wake was actually a huge big budget game. The soundtrack is, in short, bananas;  featuring Roy Orbirson, Poe, and Nick Cave. It’s extremely off-putting to see the game go from looking like a PS2 title to sounding like one of the greatest melancholy pop-songs of all time. The sound design and in-game TV show called Night Springs both also carried over perfectly from the 360 original, and both do so much to suddenly make the game’s world feel real. The contrast between those roots in reality and the purely surreal, game world you’re trapped in it when you play makes both feel stronger by juxtaposition. 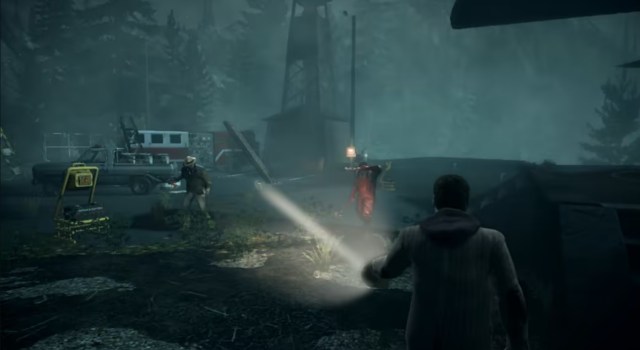 When it was first released, Alan Wake looked like something from the future, like they had someone make a game from 2022 in 2010. Now on Switch, it looks like a low budget game from 2010, unearthed for the first time 2022. It’s seems to be actively repulsive and hostile to people who loved it the first time around, but if you’re someone like me who actually likes crappy looking games, you may enjoy this Switch port. So if you want to take the chance, saddle up for a down-port that you can sincerely love, and love to laugh at, nearly at the same time.