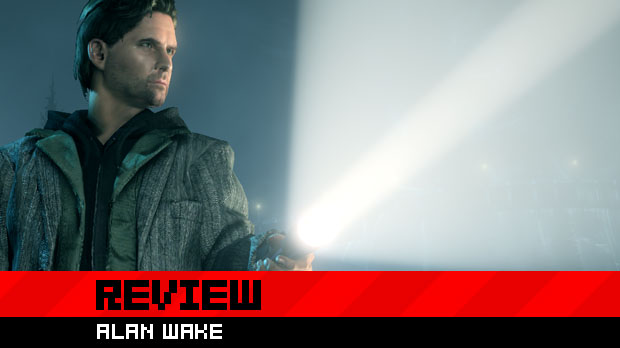 Alan Wake is a game with a long, long history. First announced in 2005, this “psychological action thriller” was originally in development for the Xbox 360 and PC. But aside from a few scant details, the game’s developer remained strangely silent for the vast majority of its five-year development history. Then it was announced as an Xbox 360 exclusive with mixed reasons provided by Microsoft and developer Remedy.

Such a storied development history usually bodes ill for the game in question, but Remedy and Microsoft have been consistently confident that Alan Wake will be one of 2010’s outstanding titles. We’ve battled the darkness through all six chapters of this spooky forest-crawler, and we’re ready to deliver the final verdict.

[We’ve moved up our review and added in an epic video review! -R3Y, Video.Destructoid.com] 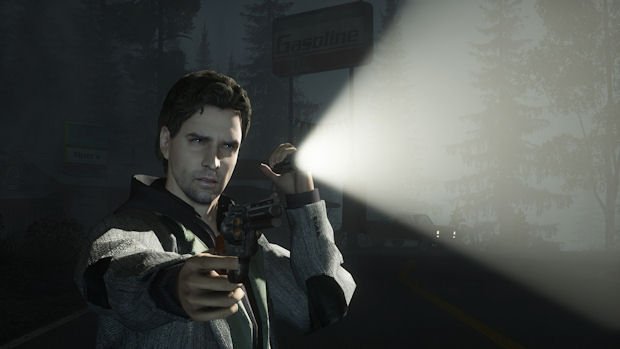 Players take on the role of the eponymous Alan Wake, an internationally famous novelist who is suffering from a two-year writer’s block. He and his wife Alice (seriously) take a vacation to the Pacific Northwest mountain town of Bright Falls, a quiet yet eccentric place with more than a little Twin Peaks flavor. However, it’s not long before things take a turn for the sinister. Alice goes missing, and Alan starts finding manuscript pages for a book he doesn’t remember writing, a book that is slowly becoming true and dictating a war between light and dark.

Alan Wake is split into six chapters, with each one carrying a distinct theme, narrative thread, and self-contained gameplay. Although primarily an aesthetic choice, the decision to split the game into chapters works surprisingly well, helped along by some appropriate (and unexpected) song choices that close each stage of the game and make for quite an unexampled videogame soundtrack. Although most of Alan Wake is spent in the creepy forests of Bright Falls, each chapter still manages to feel different, with an ultimate objective that ties into the larger story. 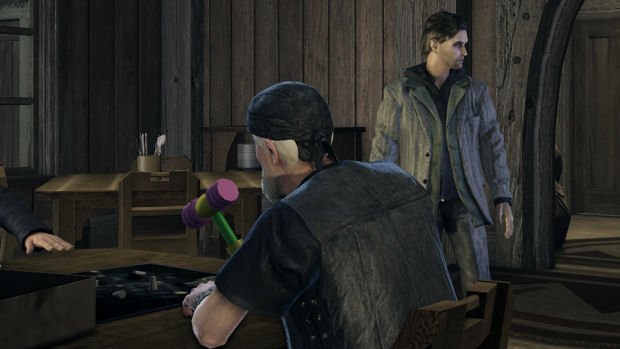 Narrative style is certainly Alan Wake‘s strongest point, and the plot is delivered with undeniable confidence and sleek production values. The story itself can be a little over-the-top in places, and players are expected to just “go” with some of the more extreme concepts and dialog, but ultimately the “80’s TV series” feel of Alan Wake is an impressive accomplishment. Even when the game borders on the cheesy and downright silly, a strong sense of character and occasional dash of humor manages to make up for it. By the time the story winds up to its sequel-hungry ending, there ought not be many players left feeling unsatisfied.

As far as the gameplay itself goes, things are slightly patchy. There’s more hit than miss, to be fair, but a few glaring errors snatch Wake away from perfection. Most notably, the combat is quite spotty and relies far too often on ambush attacks and cheap shots to maintain a sense of challenge. The dodge button also seems very unreliable and can often back Wake into a wall or even send him falling from a cliff. The majority of deaths I suffered in Alan Wake came from bad dodges, cheap shots, and falling off of things, none of which felt like my fault. 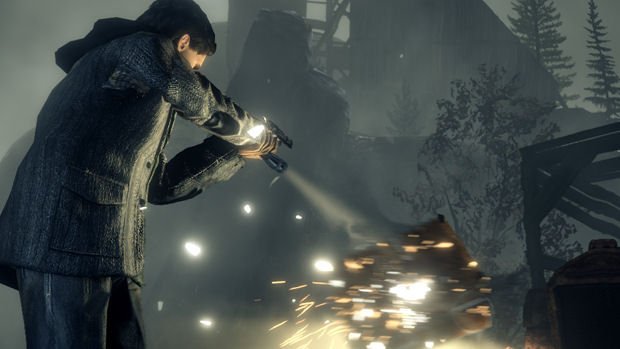 It’s a shame, because the combat system is very cool in spite of its faults. The enemies, known as the Taken, are human beings possessed by darkness, with light being their principal weakness. While consumed with darkness, they are invincible, so Wake has to expose them to light and make them vulnerable. Shining a torch on them and cranking the beam up (at the cost of rechargeable battery life) is the most common way of doing this, and once the darkness is expelled, Alan can finish them off with one of several standard firearms. There are also “poltergeist items” — inanimate objects possessed by darkness — that need to be eradicated with prolonged exposure to light. As the game’s “Dark Presence” grows stronger, it possesses cars and combine harvesters, leading to some rather hefty boss fights.

During the course of the game, Alan Wake will stumble upon all sorts of useful weapons, such as flares that keep Taken at bay, flash grenades that can clear the area of foes in a snap, and environmental tools like spotlights and “safe haven” lamps that protect Wake, refill his health, and decimate any Taken chasing him. Spatial awareness, making sure to keep watching your back, and keeping a flare handy is key to victory, and some of the bigger battles can make for tense gaming. The fighting is let down by the lack of an efficient targeting system that leads to Alan occasionally missing shots, and the aforementioned tendency for Taken to land cheap shots and back attacks without sufficient warning, some of which can reduce health by well over halfway. 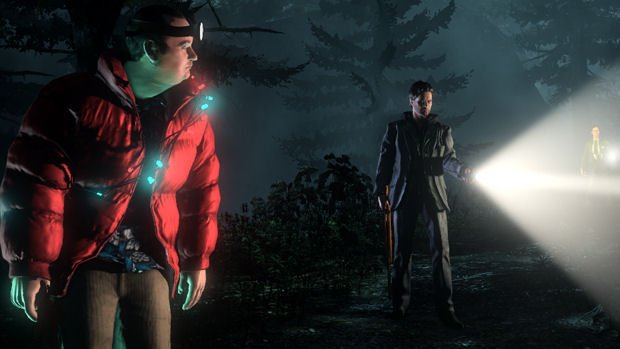 As well as combat, very simple platforming and limited QTE-sections will rear their heads. Starting generators by pressing the “A” button in time with a spinning disc is particularly effective, and can be quite scary when you’re trying to power a light with an army of Taken on your back. As far as the platforming goes, the game is let down with some very dodgy hit detection that sees Wake struggling to land properly on certain surfaces and sometimes just falling off a ledge. Nearly every jump Wake makes, whether crucial or otherwise, seems to end with him colliding badly and struggling to regain a standing animation. It doesn’t have a huge impact on the overall game, but it’s a strange quasi-glitch nonetheless.

Remedy certainly scores points for atmosphere, which Alan Wake provides in abundance. The way in which light and dark are contrasted, and the sense that players are always being chased and monitored by a sinister “Dark Presence” that frequently chews up the surrounding forest is magnificent and makes for one of the most memorable and unique experiences to have hit the Xbox 360 in a long time. A huge, huge credit also has to go to the Taken themselves, with their garbled speech patterns and bizarre taunts based on their previous lives as humans (for example, a former park warden screaming about taking care of bears). The Taken make for absurd enemies, yet effective, unnerving, and unforgettable ones as well. 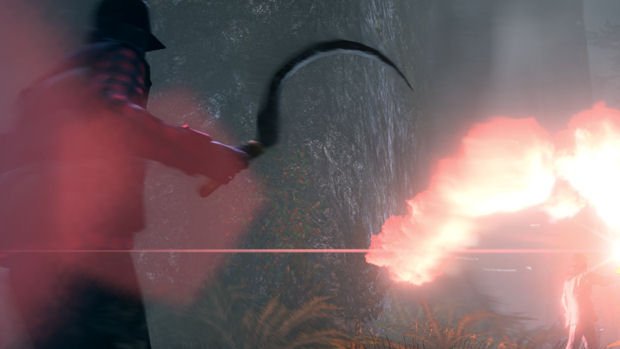 The game manages to be one of the most visually accomplished 360 games out there. While it’s not going to beat out any of the latest PS3 games in terms of raw graphical power, the game has a fantastic and evocative artistic style, and there are some wonderful setpieces and lighting. That said, the torchlight effects can sometimes be a little too overbearing, and can actually make some objects — like hidden photosensitive messages scattered around the environment — harder to see as opposed to easier. The sound department is first rate, with quality voice acting, outstanding music, and plenty of spooky sound effects. The facial animations could have used more than a little work, however.

Alan Wake has some very definite faults, but this is still a superb experience that manages to outweigh all of its problems with some truly unique and special moments, tons of character and a story that manages to be convincingly inventive despite its tendency to veer into somewhat silly territory. Anything it could do to irritate the player is quickly made up for with a consistently striking character, intriguing cutscene, or thrilling stand-off against an encroaching force of possessed and gibbering mountain hicks. Alan Wake wears its own anomalous sense of style with pride and that alone earns enough credit to spend on inefficient dodging or unfair ambush attacks.

In short, it’s a must-have Xbox 360 title that provides a freshness and dynamism that horror games have been achingly lacking for the past several years. And it’s done all of this without an awkward, unwarranted, ill-fitting sex scene!