No weapons? Wii waggle? And a “re-imagining” of the first Silent Hill game is what they’re calling this? The combination sounds like Silent Hill: My Worst Nightmare, and I don’t mean that in a good way.

Boy, was I ever wrong. Instead of some Silent Hill one-off rehash, we get a lovingly crafted story set in a world so deep and involving that it actually does the series name proud. The Wii waggle? More like Wii mastery. The control is a new hallmark for Wii games, let alone Silent Hill titles. And the no weapons part? Absolutely brilliant, and it works out to be a chillingly beautiful thing when you finally understand what the story is about.

Again, I was totally wrong.

Read on for our review of Silent Hill: Shattered Memories.

In Silent Hill: Shattered Memories you play as Harry Mason, loving father and husband and crap driver in inclement weather. The game starts out with Harry running off a snowy road and into a fence. He crawls out of his car and notices that his daughter, Cheryl, is missing from the passenger’s seat. He sets off to look around the crash site to find her. Unfortunately, he crashed on the outskirts of the worst town ever to crash in, Silent Hill. To make matters worse, it’s snowing like crazy, and the town has gone mostly…well, silent.

I wouldn’t call Silent Hill: Shattered Memories a survival horror as much as I would call it a psychological thriller. First off, there’s no combat in Memories. That’s right: instead of slowly turning and slowly swinging some found implement at some otherworldly monster, you’re running. You’re running for your life from creatures that are just as creepy as the ones from the previous Silent Hills, but for a different reason. (We’ll touch on that later.) And when they catch up with you, they tackle you, grope you, and bring you down. Your only defense is the powers of push and nudge. You can’t kill them, and that makes for a pretty terrifying experience when more than one is on your trail. 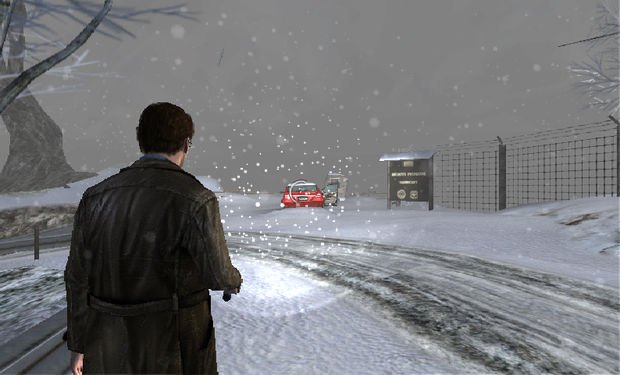 Memories is so focused on the inner workings of the player’s head that it actually opens with a “psychology warning,” which informs that the game will play the player. They’re not kidding around, either. When you’re not wandering around Silent Hill, you’re a patient in a therapist’s office, taking tests and answering questions to reveal your character. The game opens with a psychology profile that asks some pretty private questions on your love life and morals. The game can change drastically depending on your choices. A second play-through revealed new areas, new characters, and even a new attitude for Harry himself. Existing characters can look completely different, depending on your profile. For example, one character looked like a normal policewoman on my first play-through. On my second one, with my profile slanted more toward the perverted, this same cop was a busty blonde. That said, I recommend being true to yourself your first time through.

Wii motion controls are beautifully utilized in Silent Hill: Shattered Memories. To date, this is the best and most elegant use I’ve seen for the Wii Remote and Nunchuck, and I’d go as far as to say that the Wii version is the ultimate version, and should be chosen above the PlayStation 2 version. Harry is armed only with a flashlight, which comes in handy often, as Silent Hill rarely sees sunlight. Moving the Wii Remote moves your flashlight beam on what seems to be a one-to-one scale. You’re free to shine it at anything, and right away you’ll notice how smooth and realistic the cast beam is. The realism of how the light moves from your control goes a long way towards enveloping you into this snowy world. The nunchuck’s analog stick controls movement, and turning is controlled by pulling your flashlight to the far left and right edges of your field of view. While this type of turning has been used in other games to varying successes, it works solidly in Memories. 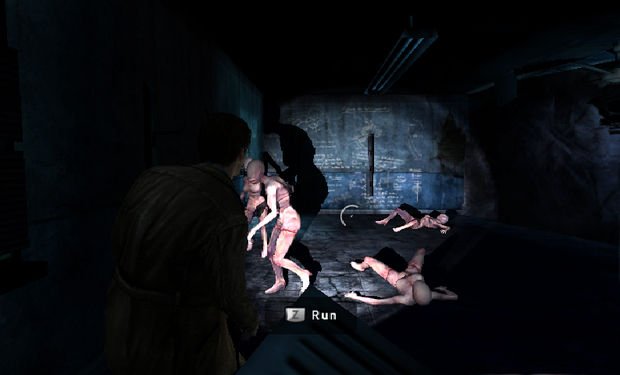 Away from exploration and into panicky sessions of being chased, which the game calls “nightmares,” you’ll use the Wii Remote to make movements in place of real-world hands. Attackers can tackle you from any direction, and you’re to use the Wii Remote and Nunchuck to repel them. If they attack from the front, you’ll need to motion both controllers forward, as if to push them off. You’ll flick them off your back, elbow them in your face, all the while holding in Z to run. One thing to note here is that the controls do not need large gestures to repel enemies. Those flailing their arms in a panic to shake off attackers will likely become frustrated, as the controls seem less responsive. Firm but controlled pushes and shoves are the key, and done right, will begin to feel like second nature as you continue on deeper into the game.

Puzzle solving and exploration involves manipulating items with virtual hands, using the Wii controls. Pinch, turn, pick up, etc. We’ve seen this in other games, but here it feels tactile and responsive. Probably the best example of Wii controls in Shattered Memories cannot be revealed in this review, as they would likely spoil parts of the story. I will say that the uses are creative, surprising, and some truly memorable. There were a couple of instances so amazingly effective that, even now, thinking about them gives me chills.

That said, you’ll want to make sure you’re gentle and not over exaggerating with the controls. Again, large, fast movements seem to throw the sensors off. Likewise, you’ll also want to be careful to not let your IR beam wander out of the Wii sensor’s view, as you’ll be stuck retracking for a few seconds, leaving you vulnerable. Being mindful of these points goes a long way towards the game’s enjoyment.

As Harry looks for his daughter in snowy Silent Hill, he uncovers dark, buried memories of both his life and his daughter’s. Some are surprising, others are disturbing. And the ones that are sexual? They’ll make more sense later. Most of this is found through exploration of the town,  and all the while Harry is struggling with his own memory, which seems to have been damaged during his car accident. This exploration sometimes leads to deeper truths and memories, and this triggers a nightmare sequence where Silent Hill turns dark and freezes over, everyone else disappears, and monsters come out of the woodwork. You’ll run through the transformed, hellish version of the town, doing your best to find the nightmare’s resolution, working to fend off monsters that seem to want to hold you back from that resolution. You’ll likely become disoriented and panicked, running around in the dark, trying to find an exit. Some may become frustrated with these scenes, but I think that was the developer’s intent. Once the lost panic sets in, it sticks with you well after it’s over. When you do finally reach the end of the nightmare, the town becomes somewhat normal again, and you resume exploration. Waking up from the nightmare, so to speak. 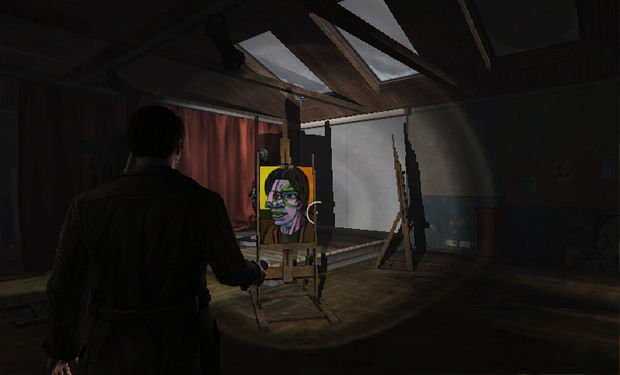 Being chased and held back by monsters in your nightmares is a beautiful parallel to the story the game is trying to tell. To reveal why these things happen would definitely ruin the story, but when you do finally find out, its the type of resolution that has you sitting alone, pondering, remembering all the scenes from the game. The game play will make sense. A second play-through is incredibly rewarding because of this, and is highly recommended. And as the game profiles everything you do and say and tailors the experience toward your mind, going “opposite” in your responses and actions the second time through is also recommended. I don’t want to ruin anything, but know that the game even keeps track of what you stare at. Eyes up here!

The dark and gritty town of Silent Hill has never looked better, and by “better” we mean worse. Darker, more desolate. Everything is that much more eerie when cast in your flashlight’s beam. The graphics dazzle on the Wii, and I found myself surprised at the graphical performance more than once while exploring. Characters manage to both remind players of the old games and bring some originality at the same time. They’re expertly animated and are voiced with what is likely the best work I’ve heard in the series. You can definitely see the loving care developer Climax put into the game. To top it all off, series composer Akira Yamaoka is back with a haunting score. This time around it’s more subdued, but it fits the sleepy, snowy atmosphere perfectly.

Perhaps you’re wondering if a Wii Silent Hill game is scary. I can say without hesitation that it is. Much of this is due to the superlative pacing and storytelling. As expected, there are plenty of jump-out scary moments, but the panic that the game’s situations causes go even farther toward scaring you senseless. When the story ends and you begin thinking about the game’s story, the tons of symbolism, and the overall message, you’ll likely be creeped out. And amazed.

While Silent Hill: Shattered Memories is a total departure in every way from what Konami proper had started, it manages to reinvigorate the series. This “re-imagining” could have been a story rehash, instead we get a brilliantly deep game with subtle subtext and surprising symbolism. It’s deep enough that some may glaze over the reasons behind the game play decisions and story elements, which were, again, brilliant. It focuses on the horrors of the human mind and gets away from the tired ghost story, making for a story much more involving and disturbing than recent Silent Hill titles. A lovingly crafted story draws you in and then wows you with a surprise ending that leaves a lingering fascination. And chills. I’m still thinking about it. From one die-hard Silent Hill fan to another, this is a true Silent Hill game. A better Silent Hill game. Do not miss this game.