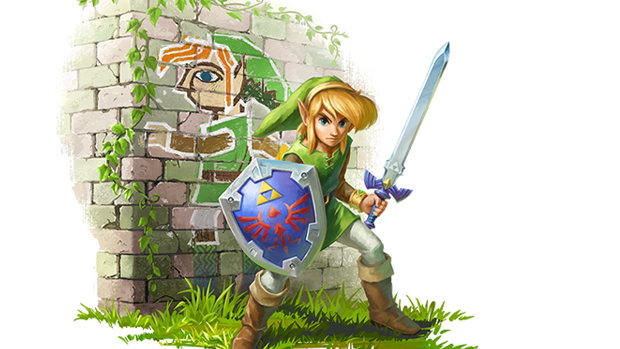 Living off the wall

Yoshi’s New Island is shaping up to be a crappier-looking retread of the original Yoshi’s Island, and some folks worry that The Legend of Zelda: A Link Between Worlds will likewise compare unfavorably to A Link to the Past. I personally think the new graphics are dandy — the SNES sprites will always reign supreme, of course — but what matters most is how the game plays.

Is it an adequate successor to arguably the best 2D action-adventure of all time? After nearly a decade without a proper top-down, button-controlled Zelda, can A Link Between Worlds pull a New Super Mario Bros. and revive the classic Zelda style? We won’t know for certain until it comes out on 3DS this November, but from what I’ve played, it’s on the right track.

The demo is the same as what Hamza played two months back — there’s a field area and a dungeon area, firing the bow consumes magic power instead of arrow ammo, and you can have items mapped to touchscreen virtual buttons as in Ocarina of Time 3D. Aside from Link’s no longer being locked to eight-directional movement, instead allowed to walk with 360-degree freedom as in his 3D adventures, the game feels just like A Link to the Past.

Something not previously seen in ALttP are these mushroom heads sticking out of the ground. By bashing them with your hammer like Whack-A-Mole and standing atop their heads before they pop back up, you can launch yourself to higher elevations. This is typically how you proceed to higher floors in the demo dungeon.

The game changer is Link’s new ability to flatten himself on a wall and run about as a chalk outline. Whenever a Zelda game introduces some new gimmick, it runs the risk of forcing said gimmick instead of intelligently incorporating it into the game. Think Skyward Sword‘s crappy harp versus Ocarina of Time‘s ocarina, for example.

But this mechanic has the potential for some truly mind-bending puzzles that require you to think in three dimensions rather than two. For example, I was riding a platform across a bottomless chasm when a wall suddenly blocked the way. There is nowhere else to go but down, that is, unless you merge to the wall, run along the perimeter to the adjacent side, then pop back out.

In another area, you see an elevator come down, but it doesn’t descend far enough for you walk atop and ride it to the next floor. However, if you turn into chalk, you can scoot across the and stick against the elevator, which is flush against the wall. Chalk Link can then ride up, walk to the opposite side of the elevator block, then pop out onto safe ground.

You must be mindful, however, as using this technique will drain magic. At least your magic automatically refills instead of requiring magic pots as in past games.

It’s been a while since I’ve sunk my teeth in an all-new 2D Zelda. Let’s hope it delivers.