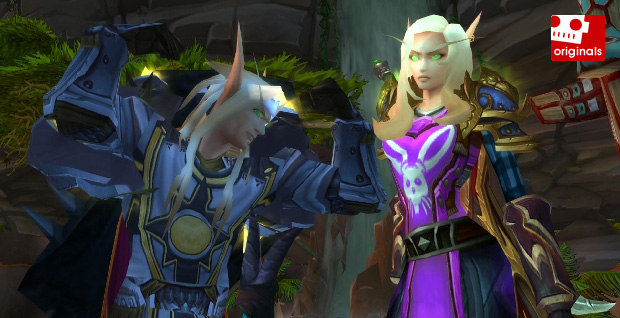 How a random meeting saved a homeless World of Warcraft addict

Justin Amirkhani is a freelance writer from Toronto, Canada. He is currently backpacking around North America visiting game developers as part of Gamer Unplugged. This is one of his stories from the road.

At its heart, World of Warcraft is a game of chance. Every random loot drop offers the possibility of earning something worth the hours spent grinding a zone. Most of the time you’ll find nothing more than useless junk and a few gold pieces, but it’s those rare occurrences that make all the effort worthwhile.

For Tyler Coon, World of Warcraft had become a crutch for his life. A failed student with no serious career aspirations, the game became an escape to soften his unfortunate reality. Chasing high-end equipment each night allowed him to forget the mundanity of his job as a traveling door-to-door magazine salesman by giving him something to hope for. Sometimes though, real life throws you a chance encounter with a prize far more valuable than any epic gear.

I met Tyler outside a Starbucks in Cleveland, Ohio. I’d been in town no more than an hour and was waiting for a ride to continue my journey cross-country, when he popped out of the coffee shop to ask me for a cigarette.

We got to talking and realized our mutual passion for videogames. He explained that, like me, he was a life-long player and had spent a great chunk of his youth absorbed in fantasy. Also like me, he was one day faced with the realization that youthful escapism can’t be sustained in adult life if you want to survive, and so he hit the road to make what he could of himself.

We sat down to talk about our lives and work, and eventually the conversation lead to him telling a rather interesting story about how a chance encounter on the road changed his life for the better. Gaming had potentially led to the downfall of his life, but in a very real way it was also his salvation.

Selling magazines door-to-door is a tough job. Every day Tyler faced rejection after rejection and just had to keep going. He survived on the few sales he made either through pity or guilt, but rarely because anyone was actually interested in print anymore. He’d slogged his way through untold numbers of houses for months, ringing bells and knocking doors barely making enough to cover the expenses of running the operation and, of course, his World of Warcraft subscription.

It may seem like a bad ordering of priorities to maintain a monthly access fee to a game when you’re short on food and shelter, but that game had been his life. For the past several years he’d poured all of his free time into it, working through the ranks in his guild and slowly improving his character. To Tyler, that subscription wasn’t just a monthly connection fee, it was his lifeline to the real life he’d built himself.

One fateful day while passing through some small Cleveland suburb, he knocked on the door of a woman who — like the rest — didn’t really have an interest in the magazines. She did however stop to talk for a brief second about the rather prominent game-related tattoos that adorned his arms. As it would turn out, she too played a lot of games, and in particular World of Warcraft.

The two stopped and talked longer about the game and their characters, both eventually realizing that they played on the same server. As the conversation and curiosity grew, they realized that not only did they play on the same server, they were members of the same guild and had known each other online for years. She was the leader of Tyler’s guild. She’d worked with him on raids, managed events his character attended, and had direct conversations with him many times before, but the two had never been in the same physical space. The surprise of the situation caused her to invite Tyler in to meet her husband and children, see her home, and share dinner.

The life she’d built for herself was impressive. It fit the mold of the American dream near perfectly. Tyler was in shock; how could this woman who devoted so much time to the same things he did have such a different lifestyle, when it was the game he blamed for his shortcomings? Had he been wrong to blame his gaming habit for his inability to build a normal life for himself? Did this mean he wouldn’t have to give it up if he wanted normalcy?

Tyler and his guild leader eventually parted — she had her life to lead and he had more magazines to sell. She did him the favor of buying a few subscriptions — specifically one about dogs in celebration of his Worgen character — and wished him well. Tyler left with a new outlook on life, realizing that balance can be achieved, even at his high level of play, and that he needn’t resign himself to a life of hardship just because he loved the game.

Tyler hadn’t figured it all out when I met him — his chance encounter had only happened a little while before — but he seemed so optimistic that I couldn’t shake my faith in him. That encounter left him with the first piece of an entire set of lessons that could help him reach the next level of his life.

All he has to do now is grind through life until he finds the rest.