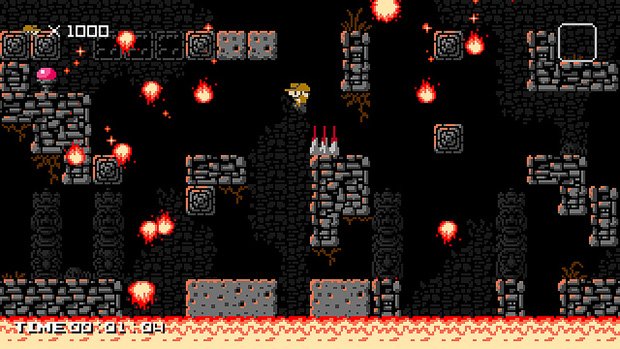 We heard the PS4, PS Vita, and Steam versions of 1001 Spikes were coming June 3. Which is great and all, but I know a number of us were going to hold out for the game on Wii U or 3DS — no need to! Nicalis has confirmed those releases are also happening on Tuesday.

What gives? Apparently, a few issues with these specific ports were found at the last minute — but the company has decided to release 1001 Spikes as is anyway and update the game as soon as possible rather than delay. “Nintendo has assured us that an update could be issued within a couple of days of release to knock out those bugs,” said Nicalis. “…we don’t plan to leave our Nintendo fans behind on a game they’ve been patiently waiting for.”

Not a great situation to be in, but assuming these aren’t serious bugs, that decision is understandable. In better news, 3DS players who own any of Nicalis’ previous games — VVVVVV, NightSky, Cave Story, Ikachan, or Grinsia — can save $5 on 1001 Spikes, bringing it down to $10.

As a fan of the original Aban Hawkins & the 1000 Spikes, Tuesday can’t come soon enough. I haven’t been paying too close attention to the new cast of characters, so 1001 Spikes should be a pleasant surprise. Up until the point at which it’s death after death after death. It’s inevitable.