[This is the final part in a series of five guest blogs from OVERKILL Software creative director Simon Vicklund about the forces that stand between you and incalculable wealth in Payday: The Heist, out today for PlayStation 3. Read previous installments [1,2,3,4] and stay tuned to Destructoid for our review!]

Hi again! This is Simon Viklund of OVERKILL Software again, and I’m now at the final part of my five piece series about the law enforcers in our upcoming co-op FPS game Payday: The Heist. The game hits PSN (PS3) today and Steam (PC) soon.

Now, I’ve saved the best for last – because today we’re going to talk about the Taser! 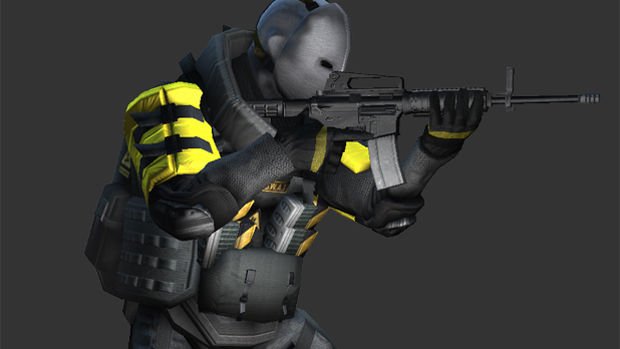 This is the Taser. He’s easily recognizable thanks to his wasp color palette – and believe me, this guy packs a mean sting! He also has maybe the most characteristic sound that warns you about his presence: No matter how noisy the gunfire is at the moment, the high pitch sound of his stun gun charging up cuts through – and when you hear it you’d better be on your guard!

The taser has an AMCAR-4 carbine that he uses to engage enemies on a distance greater than 14 meters (46 feet) – but it’s when his target gets closer than 14 meters that things get ugly, because that’s when it’s in range of his stun gun. The taser weapon shoots out two wires into its target and immediately sends electrical current through these wires to incapacitate the victim.

As a player, it’s a very disturbing effect – believe us. The screen is tinted slightly blue, your aim starts to jerk around uncontrollably and you hear that loud, nasty click-click-click-click sound of rapid electrical shocks.

Randomness ensues as your trigger finger clenches and you uncontrollably empty your entire ammo clip: If you’re unlucky you’ll shoot an innocent nearby civilian. If you’re lucky you’ll shoot the Taser himself! Yep that’s right, through some luck you can shoot yourself free. Chances are you will only have hurt the Taser though, so if you’re freed you’d better act fast and back away from him or he’ll tase you again!

If you fail to shoot your way out of the Taser’s grip, you’ll have to rely on your teammates to take out the Taser and save your soon-to-be fried ass. From the moment you start being tased, your friends have exactly ten seconds to take out the Taser (they’ll have no problem finding you thanks to the characteristic sound) or you’ll go into the incapacitated state.

The Taser is probably the most interesting enemy in Payday, simply becuase he adds so much suspense when you know he’s around and then he also adds so much excitement mingled with terror once he strikes! If you can only remember one thing from this article, remember this: Always keep 14 meters between you and the giant wasp man!

Payday: The Heist is a downloadable co-op FPS game for PSN (PS3) and Steam (PC), and it’s out today! Check out www.overkillsoftware.com, www.payday-theheist.com and our Twitter account “overkill_tm” for news!